Former President Donald Trump is calling on the Pulitzer Prize Board to rescind awards given in 2018 to the staffs of the New York Times and the Washington Post for their reporting that fueled the hoax that the Trump campaign had colluded with Russia to win the 2016 presidential election.

I call on the Pulitzer Prize Board to immediately rescind the 2018 Pulitzer Prize for National Reporting awarded to the staffs of the New York Times and the Washington Post, which was based on false reporting of a non-existent link between the Kremlin and the Trump campaign. As has been widely publicized, the coverage was no more than a politically motivated farce which attempted to spin a false narrative that my campaign supposedly colluded with Russia despite a complete lack of evidence underpinning this this allegation.

Trump added, “For two years, these institutions feverishly pushed one Russia story after another and — despite lacking any credible evidence — attempted to persuade the public that my campaign had colluded with the Russian government.” 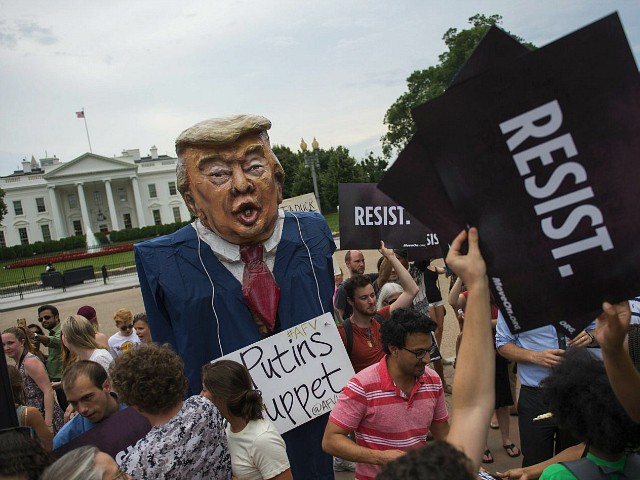 Protesters hold up signs near a U.S. President Donald Trump puppet during a rally calling for accountability for the Trump campaign’s alleged collusion with the Russian Government in front of the White House in Washington, DC, on July 11, 2017. (Photo credit should read ANDREW CABALLERO-REYNOLDS/AFP/Getty Images)

He called on the news outlets to voluntarily surrender their awards, but if not, he expected the board to act.

“For over a century, the Pulitzer Prize has been widely recognized as a significant achievement in the field of journalism. … When it becomes apparent that a Pulitzer Prize-winning work was based on shoddy, dubious and manifestly false reporting — as is the case here — the Pulitzer Prize Board must react accordingly,” he wrote.

Trump’s letter was attached to another letter from a lawyer representing him, dated November 15. His lawyer’s letter similarly demanded that the board strip both papers of their prizes or face “prompt legal action.” The lawyer, Alina Habba, wrote:

Based on the foregoing, it is hereby demanded that the Pulitzer Prize Board take immediate steps to strip the New York Times and The Washington Post of the 2018 Pulitzer Prize for National Reporting. Pulitzer Prize Board’s failure to do so will result in prompt legal action being taken against it. Please be guided accordingly.

Habba noted that sources for the outlets’ reports are “now facing criminal charges for their illicit conduct.”

The indictment revealed that Danchenko provided information from a fabricated source and from a public relations executive who was long-time Bill and Hillary Clinton associate Charles Dolan Jr. 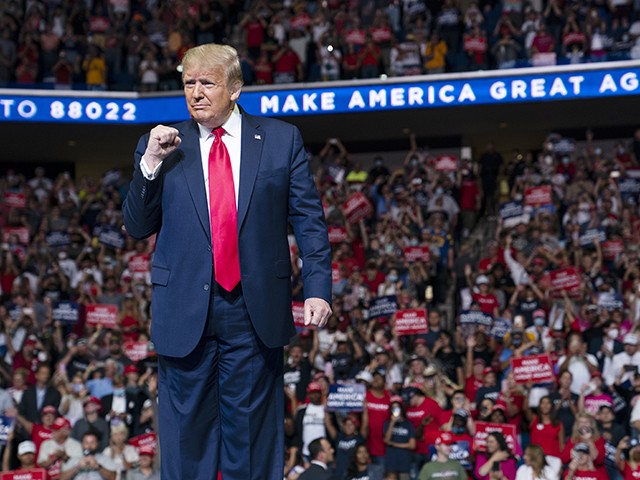 The revelations prompted the Washington Post to retract and edit portions from about a dozen articles last week, with its executive editor writing that, “The Post could no longer stand by the accuracy of those elements of the story.”

Despite these revelations, the Pulitzer Prize Board has failed to take any action to correct, retract, or otherwise repudiate the false reporting contained in the subject articles. Even one of the recipients of the award, The Washington Post, has acknowledged the unsubstantiated nature of its reporting as it relates to these events. Specifically, on November 12, 2021, The Post retracted statements from several articles relating to the Steele Dossier and the alleged Russia-Trump connection and its executive editor proclaimed that “The Post could no longer stand by the accuracy of those elements of the story.

The lawyer noted that the Post has also called upon CNN to likewise retract its reporting, adding that its failure to do so is why “many people mistrust CNN.”

Meanwhile, Habba wrote, the Pulitzer Prize website still maintains that the subject articles were “deeply sourced” and still refers to “Russian interference in the 2016 presidential election and its connections to the Trump campaign, the President-elect’s transition team and his eventual administration.”

“By failing to remove these statements, revoke the award, or even publicly comment on the illegitimate nature of the works, the Pulitzer Prize Board is actively advancing the false narrative contained therein and promoting defamatory statements against our client,” she wrote.

She warned the Pulitzer Prize Board that it is under a legal duty to retain and not destroy any relevant documents or information.