In what is yet one more example of how the establishment media refuse to vet high-profile Democrats, The Washington Free Beacon reports that after contacting Coleman, she “deleted thousands of old tweets.”

On Thursday, the DCCC announced that Coleman, who is described as a “DCCC veteran,” will lead an engagement effort as “the DCCC’s first-ever Director of the Cycle of Engagement.”

The DCCC describes the “Cycle of Engagement” as a “multi-year strategy to make sure we earn the support of two of our key constituencies — people of color and younger Americans [.]”

But in charge of that effort is Colemen, who has a long and sordid history of homophobia, especially with her repeated use of the tag “NoHomo,” a term used to mock homosexuality. Coleman also attacked Mexicans as dangerous. These tweets date back to 2010.

Here are some screen grabs captured by The Washington Free Beacon: 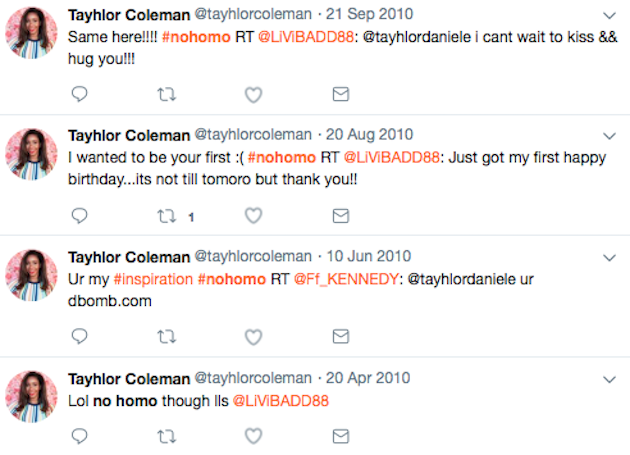 The Washington Free Beacon reports that after being contacted about her bigotry, Coleman’s tweet count dropped from 4,524 to just over a thousand. She also blocked the reporter who contacted her.

Coleman joins a number of high profile leftists with a sordid history of bigotry who remain in good standing among the left-wing media and political and celebrity elite. Others include homophobic actor Alec Baldwin, homophobic MSNBC anchor Joy Reid, and 2020 frontrunner Joe Biden, whose racist past is just now coming to light after nearly 50 years in the public eye.