John Haltiwanger, a Business Insider politics reporter, claims that his job is simply to “report the facts,” but on his social media — particularly his Instagram page over the years — he has aligned himself with the anti-Donald Trump resistance.

On Nov. 9, 2016, as Donald Trump became the president-elect of the United States when he defeated Democrat Hillary Rodham Clinton in the presidential election, Haltiwanger took to the streets of New York City to join in with protesters against Trump’s incoming administration. He celebrated his activism against the president on his Instagram page, where he explicitly said in one post of him with protesters that “Donald Trump is #NotMyPresident.” 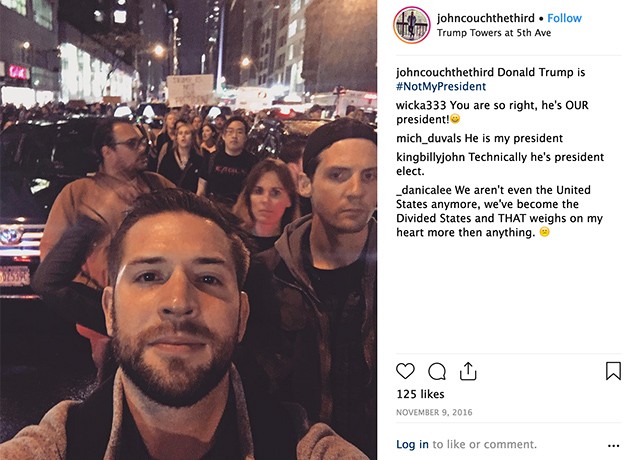 Another Instagram post from Haltiwanger shows video of people, including presumably him, marching through the streets of New York, chanting, “Not My President.” He celebrates the fact that a taxi driver joined in with the protesters with whom he was marching: 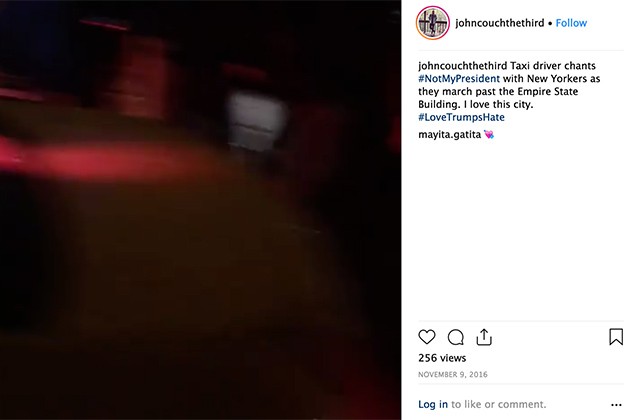 In another post, Haltiwanger suggests that despite the fact he worked in media–at the time he worked for a millennial blog called Elite Daily–he was one of the protesters, not simply covering them. Haltiwanger said he was “marching with Trump protestors in New York City, where love always trumps hate.” The hashtag he used, #LoveTrumpsHate, was a slogan of the Democrat Clinton’s campaign: 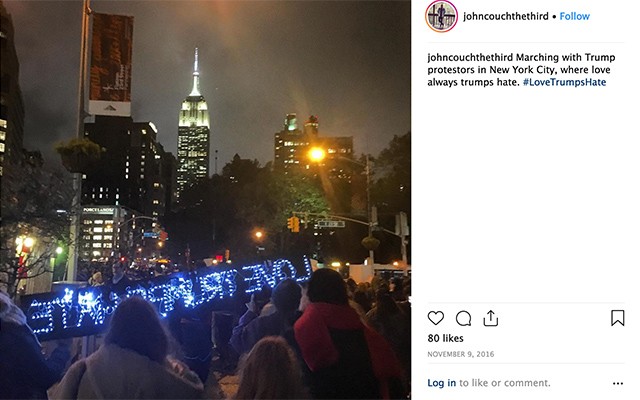 Before joining the march, Haltiwanger was at the Javitz Center–Clinton headquarters–for the election night results: 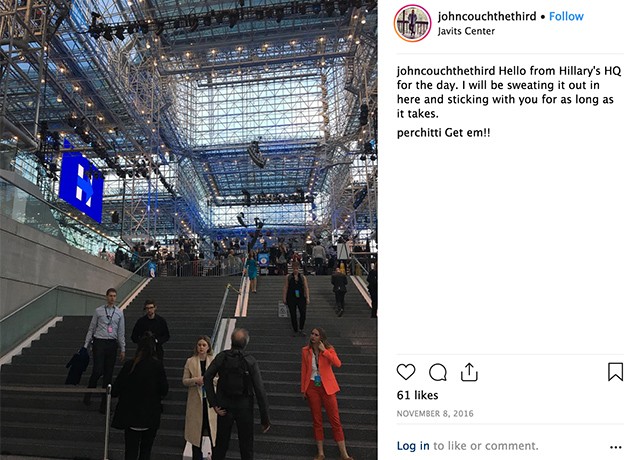 On Christmas Day in 2016, he posted a photograph of a rainbow flag at his parents’ house in Washington, D.C. He said the rainbow flag was a “middle finger” to then-incoming Vice President Mike Pence. “Mike Pence currently lives around the corner from my parent’s house in DC. This is our middle finger to his presence,” Haltiwanger wrote. 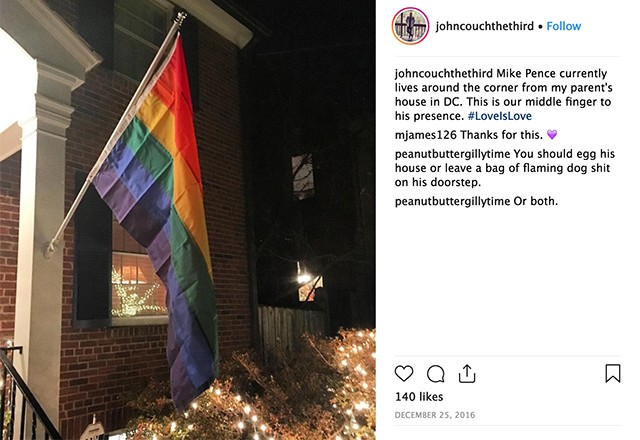 Earlier that day, he posted a photograph of Barack Obama, Bernie Sanders, and Hillary Clinton dolls he seemingly got for Christmas, saying his mother “knows him well.” With the post, he included hashtags of their various campaign slogans: 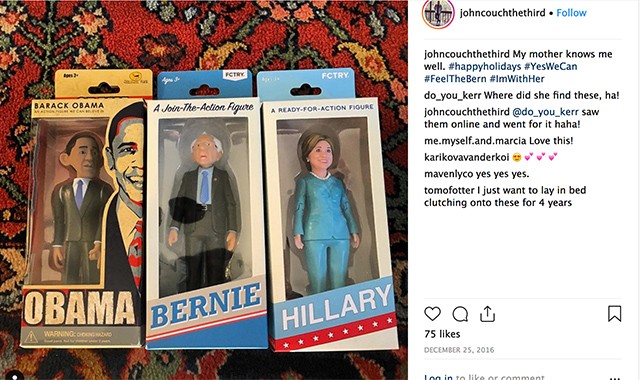 On Trump’s Inauguration Day, Jan. 20, 2017, Haltiwanger posted a photograph of a burning flag and commented: “America is burning.” 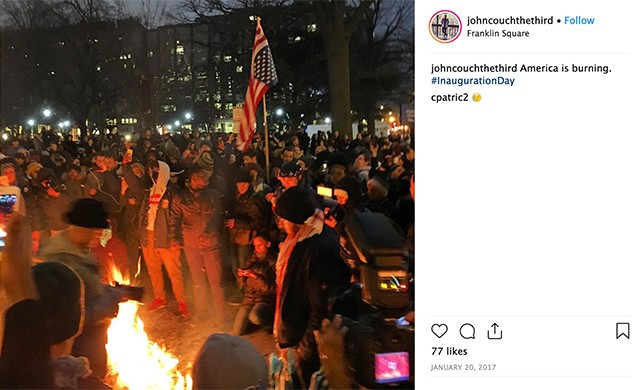 The next day, Jan. 21, 2017, Haltiwanger posted photos of himself in solidarity with the “Women’s March” held in the nation’s capital and in other locations around the country and world. He was at the D.C. location protesting Trump. He said in one post: “we out here,” meaning he joined the protesters, and used the hashtags #WomensMarch and #WeShouldAllBeFeminists: 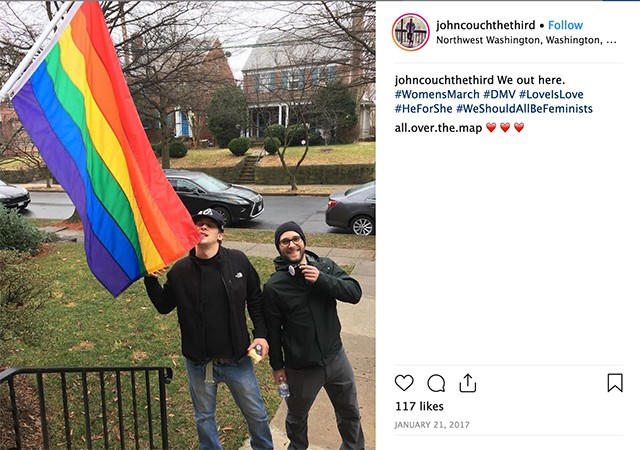 In another one, he put up a photo of the crowd and called it “the popular vote” in the 2016 election:

In another one, he expressed solidarity with the anti-Trump resistance by using the hashtag #Resist:

His anti-Trump activism continued with a number of posts throughout 2017, including this one where Haltiwanger opines that the president’s presence when meeting with Pope Francis “toxic”:

Then there is this one in July 2017 where he posts a photo of him and friends outside the White House, where he attacks the “orange man-baby” Trump who “currently inhabits” it: 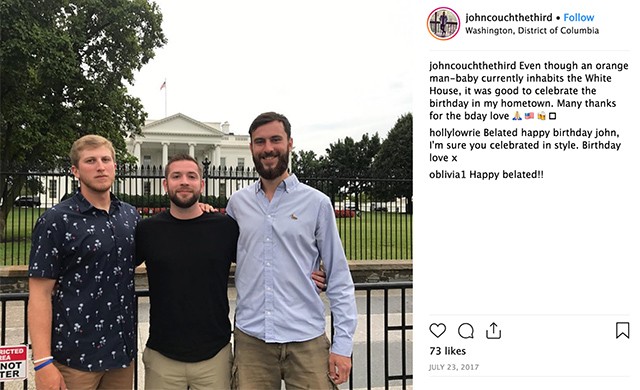 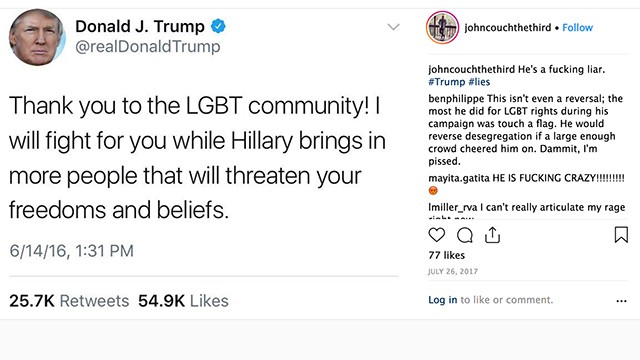 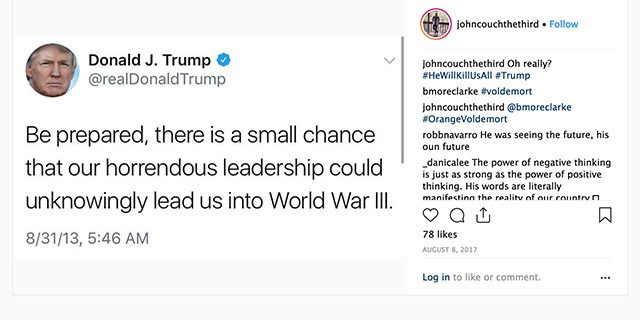 According to his LinkedIn profile, Haltiwanger left Elite Daily in August 2017 for Newsweek, where he served from August 2017 until February 2018 as a “Breaking News Writer.” Since February 2018, he has been a “Politics Reporter” for Business Insider.

These days, Haltiwanger says his job is simply to “report the facts.”

It's my job to report the facts. That's what I've done here. Have a nice day.

He said this in response to challenging a Breitbart News story that was shared by Donald Trump, Jr., about an ADL report showing a decline in hate-fueled killings under President Trump as compared with during the Obama administration:

When FACTS conflict with NARRATIVE

“As a minority, I am appalled at the disgusting behavior by one of Business Insider’s reporters,” one former Trump campaign official who is a minority told Breitbart News.

A former White House official pointed to the fact that Jeff Bezos, the owner of the Washington Post and Amazon founder, is a partial owner of Insider, Inc., the parent company of Business Insider. “This total disgrace to journalism is, sadly, not much of a surprise considering Jeff Bezos was an early investor in Business Insider,” the former Trump White House official said. “He knows fake news when he sees it.”

A source close to the first family added suggested the publication should fire Haltiwanger.

“This is indefensible,” the source close to the Trump family told Breitbart News. “They lose all credibility if this guy doesn’t get his walking papers.”

When asked for comment — particularly when asked how marching around various anti-Trump protests chanting he’s “Not My President” and hanging flags that he says are a “middle finger” to the Vice President is somehow simply doing the job of someone who aims to “report the facts” — Haltiwanger referred Breitbart News to a spokesman for Insider, Inc. The spokesman, Mario Ruiz, issued a statement saying that Business Insider finds the statements that Haltiwanger made to be inappropriate for any journalist–but defended him because many of these statements were made before he worked for Business Insider.

“We agree that statements made on social platforms – such as those in question – are not appropriate coming from journalists,” Ruiz told Breitbart News. “It’s why we have guidelines for the newsroom that make clear the importance of refraining from expressing partisan opinions on social media. The comments John made on Instagram were posted prior to his employment with Insider.”

Haltiwanger also, after the comment request from Breitbart News, made his Instagram account private–it was public until midday Wednesday when Breitbart News reached out to him and Business Insider for comment–and deleted at least one of the posts in question. Breitbart News has preserved the posts in screenshots and published relevant ones above.

His decision to hide these images and his comments with them on these Instagram posts from the public by making his account private was made as a member of Business Insider’s staff, on Wednesday afternoon. When asked about this, and whether Business Insider supports Haltiwanger hiding this information from the public amid  a press inquiry, Ruiz replied: “as for making his account private, he’s well within his right to do so.”

Ruiz has not replied when asked if Haltiwanger still holds the views expressed in the posts above. Ruiz has also not answered whether Haltiwanger does hold these views his company considers inappropriate for a journalist to espouse — or how he separates them from his reporting. Ruiz did not immediately answer a question on whether these social media accounts were vetted before Haltiwanger’s hiring.