According to a recent report, the cryptocurrency group that recently failed to purchase a rare copy of the U.S. constitution is in disarray as organizers attempt to refund donors. The high cost of ethereum transactions, known as “gas fees,” will lead to many donors losing their entire investment in the project.

Vice News reports that the cryptocurrency investor group that attempted to purchase a copy of the U.S. Constitution recently, ConstitutionDAO, is currently facing inner turmoil as people realize that around half of the project’s donors will lose most of their investment to cryptocurrency fees. 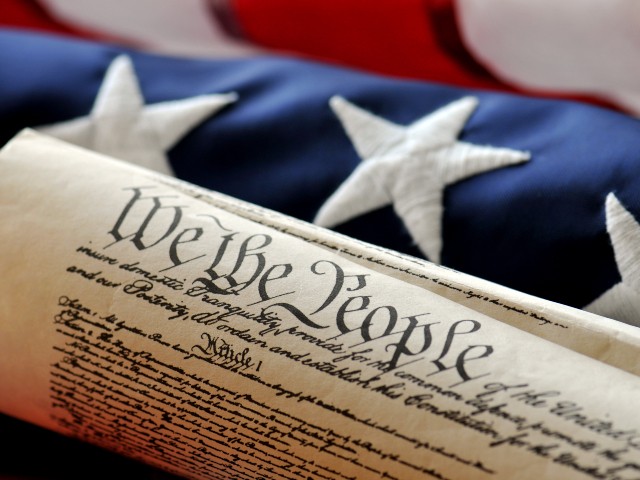 The Constitution against a flag ( alancrosthwaite/Getty)

Group members are also beginning to argue about the future of the group, the purpose of the original $40 million raised to purchase the Constitution, and what to do with the $PEOPLE token given to donors in exchange for their donations.

Following the sale of the copy of the Constitution at Sotheby’s auction to hedge fund CEO Ken Griffin which Breitbart News reported on, the founders of ConstitutionDAO still seemed optimistic. The project organizers stated in their Discord group that although they lost, “we still made history tonight.”

The project admin posted on Thursday: “We have educated an entire cohort of people around the world—from museum curators and art directors to our grandmothers asking us what eth is when they read about us in the news —about the possibilities of web3.”

Donors to the project have essentially been left with two options, Vice News writes:

ConstitutionDAO recommended that any donors to the project add about $150 to $200 more to their donation than they’d like to contribute in order to cover gas fees, which are transactions fees on the Ethereum network. Vice News outlined how this process works, writing:

ConstitutionDAO accepted only ether, the token on Ethereum. For someone to convert USD to $PEOPLE tokens, the process had several steps. First, we had to buy Ethereum on an exchange (we used Coinbase). We bought $200 worth of Ethereum. Coinbase took a $3 fee. Then, we had to send the Ethereum from Coinbase to a MetaMask crypto wallet. To do this, we had to pay a $12 network fee. Then, we had to send the Ethereum from MetaMask to Juicebox. So-called “gas” fees vary wildly and depend on how busy the Ethereum network is at any given moment and the complexity of the transaction. Right now, gas fees on Ethereum are very high, and a highly complex operation could end up costing hundreds of dollars in fees. In our case, we paid a $75 gas fee to contribute roughly $75 to the project. Of the initial $200 we bought in ETH, $90 was eaten up in fees simply to donate to ConstitutionDAO.

Motherboard was not alone in paying exorbitant fees to simply donate to ConstitutionDAO. The total cost in fees for donating to the project was nearly $1 million, with much of the cost being borne by people donating relatively small amounts (because the fees are paid per transaction, meaning people who donated huge sums of money paid a lower amount, percentage wise, when donating).

In order to get a refund, we have to do this in reverse, basically. And so to get our ETH back from Juicebox, we would have to pay gas fees again, meaning essentially the entirety of the amount invested would be wiped out.

Essentially, half of the people who donated to ConstituionDAO are likely to lose almost their entire investment into the project due to Ethereum network fees. Or they can continue to support the project despite its unclear future.