Yahoo, Inc. announced on Tuesday it has withdrawn its services from China, effective immediately – in fact, effective the previous day, November 1.

The company made its decision based on the “increasingly challenging business and legal environment in China.”

“Yahoo remains committed to the rights of our users and a free and open internet. We thank our users for their support,” Yahoo said in its statement on Tuesday.

Yahoo’s pullout was somewhat “symbolic,” as the Associated Press put it, because the company closed its Beijing office in 2015 and has already discontinued many of the services it once offered in China. Chinese Internet giant Alibaba largely maanged its remaining operations.

Chinese users of Yahoo’s remaining apps were sent warning messages last month that the company would shut down services at the beginning of November. A few Yahoo apps reportedly stopped working in mid-October. 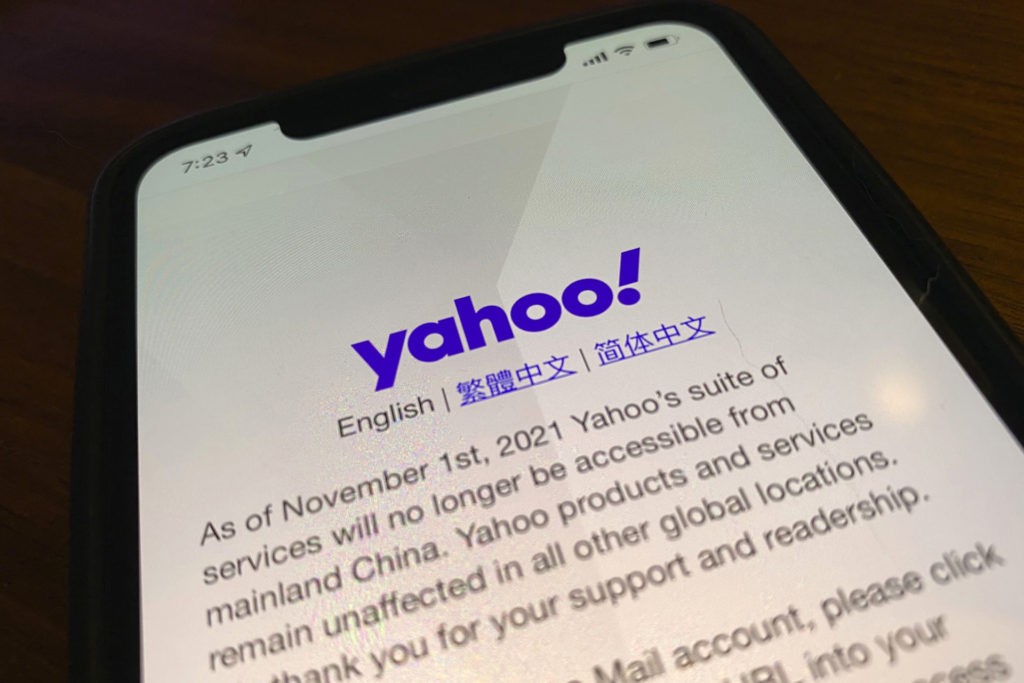 A smart phone shows the home page of Yahoo when accessed inside China in Beijing, China, Tuesday, Nov. 2, 2021. Yahoo Inc. on Tuesday said it plans to pull out of China, citing an “increasingly challenging business and legal environment.” (AP Photo/Ng Han Guan)

November 1 happened to be the day China’s Personal Information Protection Law (PIPL) went into effect. The law, passed in August, was touted as protecting individual Chinese citizens from excessive data harvesting by corporations.

Skeptics noted the Chinese government intends to continue collecting huge amounts of data on both its own citizens and foreign nationals and nothing in the new law places any serious limits on government surveillance.

The biggest problem PIPL created for international companies like Yahoo is that it imposes significant compliance costs upon them and the regime could invoke it to shut down applications that move data about Chinese consumers to other countries.

Unlike the European Union’s data privacy law, the Chinese government imposed PIPL unilaterally and it overrides all other national laws and treaties. Legal analysts warned PIPL could give the Chinese Communist Party (CCP) a considerable amount of control over any foreign tech company that has operations in China – both explicitly through its regulations, and informally because the CCP can easily threaten to hyper-regulate or shut down any Internet company that hesitates to comply with its demands.

The Wall Street Journal (WSJ) on Tuesday noted the risks of doing business in China were already high, and they increased considerably when the PIPL went into effect:

Violating the new privacy law could come at a high cost for companies. Illegal activities that are considered serious could result in a fine of up to $7.7 million, or up to 5% of the preceding year’s business income, according to the law’s latest draft.

If companies are compliant with Europe’s GDPR, “they are going to be fine complying with the Chinese privacy law,” said Alexa Lee, senior manager of policy at the Information Technology Industry Council, a Washington-based trade association of high-tech companies.

But national security-related provisions in the law, such as one enabling the blacklisting of overseas data handlers who endanger China’s national security or public interest, could be driven by considerations unrelated to privacy, such as U.S.-China relations, she said. “That is an area companies can’t predict and they cannot control.”

“You should be fine if you comply with European law, unless the Chinese government decides your operations are a national security risk” is not very comforting, given how aggressive China has been about framing every action and utterance the Communist Party dislikes as a menace to national security.

Microsoft’s networking platform LinkedIn announced in October it would shut down its services in China by the end of the year.

Microsoft issued a statement very similar to Yahoo’s, citing a “significantly more challenging operating environment and greater compliance requirements in China” as the reason for its decision.

LinkedIn administrators said Chinese regulators told them they were collecting too much data about their users, so they had good reason to worry about facing more draconian penalties when the PIPL went into effect. LinkedIn users reported receiving vague warnings about sharing content prohibited by Chinese censors, such as criticism of dictator Xi Jinping and articles about the Tiananmen Square massacre.

Fortress Night was launched in 2018 as a partnership between Epic Games and Chinese tech giant Tencent, one of Epic’s biggest investors. The game was technically in “test” or early-release status during its entire lifespan. It had to be launched as a different game than Fortnite because Chinese censors placed heavy restrictions on its content. Given the timing of the cancellation announcement, it would seem Epic and Tencent decided the risks of continuing the game under the PIPL were too high.