During her testimony before the Senate Commerce Subcommittee on Tuesday, Democratic senators from Amy Klobuchar to Ed Markey heaped scores of praise upon far-left Facebook “whistleblower” Frances Haugen, extolling her for her courage and willingness to come forward.

While multiple topics regarding Facebook were discussed before the Senate on Tuesday — from the company’s unethical use of private data to the social media platform’s harmful effects on children — the primary topic Haugen pushed in her opening testimony was the U.S. government’s role in regulating Big Tech to protect the future of American Democracy, which often translates into halting the spread of “misinformation” and “hate speech.” For instance, Haugen, who has enlisted the aid of anti-Trump impeachment lawyers, previously blamed Facebook for helping to stoke the flames that led to the January 6 riot on Capitol Hill this year. 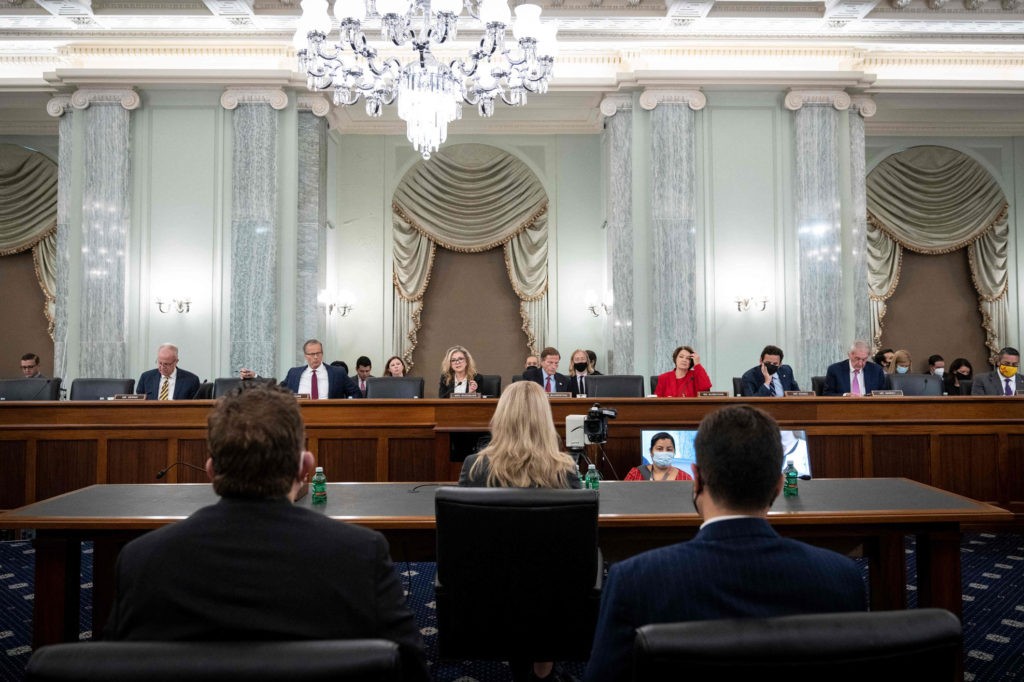 Former Facebook employee and whistleblower Frances Haugen testifies during a Senate Committee on Commerce, Science, and Transportation hearing on Capitol Hill on Tuesday, Oct. 5, 2021, in Washington. (Drew Angerer/Pool via AP)

Throughout the three-hour hearing, Democrats were quick to hail Haugen as a “hero” for her testimony while vowing to aggressively pursue legislation to regulate the Big Tech giant.

“You are a 21st-century American hero warning our country of the danger for young people, for our Democracy, and our nation owes you just a huge debt of gratitude for the courage you are showing today,” Sen. Ed Markey (D-MA) said as he began questioning Haugen.

Markey praised Haugen for her “courage” after she testified that people like herself should be the ones in charge of regulating Facebook in the future.

“Right now, the only people in the world who are trained to analyze these experiments, to understand what is happening inside of Facebook, are people who ‘grew up’ inside of Facebook, or Pinterest, or another social media company,” Haugen said before the committee.

During her round of questioning, Sen. Amy Klobuchar (D-MN) praised Haugen for her “bravery in coming forward” after implicating Facebook had a role in the January 6 riot on Capitol Hill. 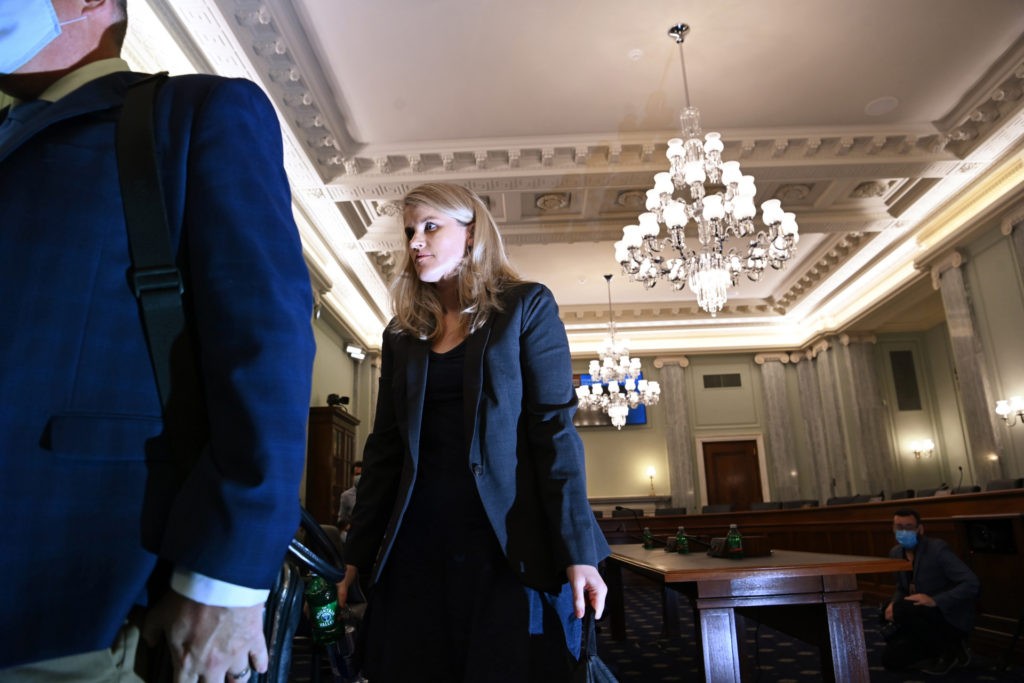 Facebook whistleblower, Frances Haugen leaves after appearing before the Senate Commerce, Science, and Transportation Subcommittee during a hearing entitled ‘Protecting Kids Online: Testimony from a Facebook Whistleblower’ at the Russell Senate Office Building on October 05, 2021, in Washington, DC. (Photo by Matt McClain-Pool/Getty Images)

“On 60 Minutes, you said that Facebook implemented safeguards to reduce misinformation ahead of the 2020 election, but turned off those safeguards right after the election,” Klobuchar said. “You know that the insurrection occurred on January 6, do you think that Facebook turned off the safeguards because they were costing the company money because it was reducing profits?”

Haugen confirmed that Facebook “returned to its original default” after the election to keep the platform viral, suggesting that it sparked the Capitol Hill riot.

Klobuchar further praised Haugen on Twitter for going against “one of the most powerful companies the world has ever known.”

“I won’t stand by while our kids, health, and democracy become collateral damage in the profit game being played by Facebook,” tweeted Klobuchar. “I thank Frances Haugen for coming forward to face off with one of the most powerful companies the world has ever known. We hear you. And we have your back.”

I won't stand by while our kids, health, and democracy become collateral damage in the profit game being played by Facebook. I thank Frances Haugen for coming forward to face off with one of the most powerful companies the world has ever known. We hear you. And we have your back.

After tweeting praise of her interview on 60 Minutes, Sen. Richard Blumenthal (D-CT) regarded Haugen’s testimony before the committee as an example of one person making “a difference,” predicting that her testimony will lead to a cavalcade of whistleblowers at Facebook coming forward to bring about change:

Your being here sends a profound message to our nation that one person can really make a difference. One person standing up and speaking out can overcome a lot of those obstacles for us. And you have crystalized, in a way, our consciousness here, you have been a catalyst, I think, for change in a way that we haven’t seen. I’ve been working on these issues for 10, 15 years and you have raised awareness in a way that I think is very unique. Thank you not only for your risk-taking and your courage and strength in standing up, but also for the effect it has had.

I also want to make another point and you can tell me whether I’m correct or not: I think there are other whistleblowers out there. I think there are other truth-tellers in the tech world. I think you are leading by example. I think you are showing them that there is a path to make this industry more responsible and more caring about kids and about the nature of our public discourse or about the strength of our democracy. I think you have given them a boost, those whistleblowers out there, and potentially coming forward.

Haugen simply nodded along and smiled as Blumenthal sang her praises.

In a statement following Haugen’s testimony, Facebook Director of Policy Communications Lena Pietsch blasted the former product manager, characterizing Haugen as a low-level employee who had no direct relationship with the types of issues she raised.

“Today, a Senate Commerce subcommittee held a hearing with the form product manager at Facebook who worked for the company for less than two years, had no direct reports, never attended a decision-point meeting with C-level executives – and testified more than 6×2 not working on the subject matter in question,” began Pietsch.

“We don’t agree with her characterization of the many issues she testified about,” she added.

Pietsch, however, concluded that legislators need to “act” instead of “expecting the industry to make societal decisions.”