A Connecticut school district instructed its teachers to focus on race while performing various daily tasks, such as waking up in the morning, drinking coffee, brushing their teeth, and eating breakfast. The purpose of the exercise is to “enhance” teachers’ journeys to “becoming more racially considerate.”

Manchester Public Schools (MPS) in Manchester, Connecticut, provided its teachers with a “Daily Racial Reflection Timeline” as part of a so-called equity training, according to Fox News, which obtained a copy of the exercise from former MPS teacher Jennifer Tafuto, who recently resigned over concerns of the school district’s excessive focus on race.

For the bizarre exercise, teachers were instructed to “list as many actions as possible of your regular daily routine starting with immediately after you wake up until you return to bed at the end of your day,” and then “reflect on how race plays a role in what you have listed.”

“This is meant to assist you in building your racial reflection timeline and enhance your journey in becoming more racially considerate, as well as more fluent in centering race,” the exercise explains.

Teachers were also provided with a general list of four main daily tasks they should reflect on race during:

Wake up and get coffee

Workout, do Yoga, and meditate

Brush teeth and take a shower

In addition to the list of tasks, the exercise provided teachers with what it called “real” examples of “racial reflections” to consider for white and non-white individuals while they engage in the tasks listed above.

With regards to the task of waking up in the morning, the exercise suggested that non-white people feel the need to set their alarm 45 minutes earlier than necessary, so that they do not risk being late to work, or else their co-workers will believe they were late to work due to their race.

The school district’s exercise also suggested that non-white people participate in Yoga or meditation in order to prepare themselves for “an environment that is racially hurtful.” 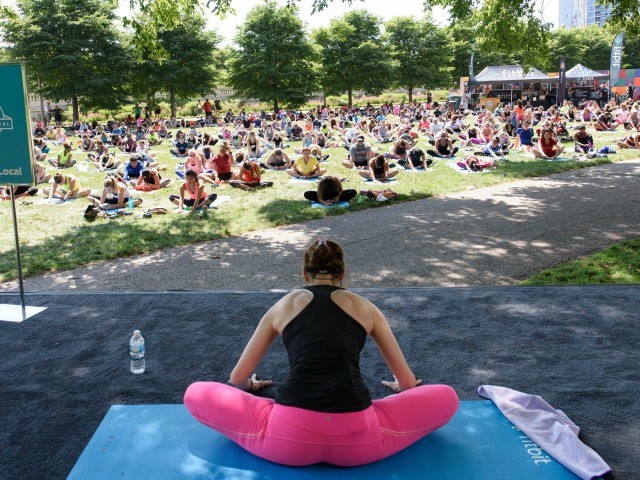 When it comes to an activity such as brushing one’s teeth, non-white people feel they are engaging in acts of cleanliness, not because they are trying to be healthy, but because they need to show their white colleagues that non-whites can also be “well groomed,” according to the exercise.

In order to be more racially “more racially considerate” while brushing their teeth or taking a shower, white people should also consider that “so many non-whites all around the world” don’t have “access to clean safe drinking water and I just wasted gallons of it in [an] hour long shower.”

While getting dressed in the morning, the school district’s exercise provided the following example of a thought a white person could have:

Where are my clothes made and am I playing into the oppressive industry of “Fast Fashion”? Do I get a pass when I “dress down” because I’m white, where if my Afro-Cuban friend did the same thing, would she get the same kind of “pass”? I had orange juice, eggs, avocado toast for breakfast. I know that field workers from Mexico or some other place from the 3rd world picked that; are they paid fairly? Would I have even cared if I was not doing this racial work? I feel overwhelmed.

Manchester Public Schools’ race-obsessed exercise is just the latest example of the bizarre and concerning Critical Race Theory (CRT) trend that has been sweeping through schools across the country.

In June, a teacher at the prestigious Dwight-Englewood (D-E) prep school in Bergen County, New Jersey, resigned over what she called a “hostile culture of conformity and fear” created by CRT.

Last month, a teacher of Loudoun County Public Schools (LCPS) in Virginia resigned during a school board meeting over the district’s CRT training program, which she says labeled her an oppressor due to her skin color, and is pushing “highly politicized agendas” onto the county’s “most vulnerable constituents, the children.”