According to recent reports, Google has published a calculator for employees that shows the internet giant will be lowering the pay of workers in the U.S. who choose to work remotely on a permanent basis.

BBC News reports that tech giant Google is planning to cut the pay of certain workers who refuse to return to company offices and choose to work remotely. Google has previously paid employees with their location playing a factor in compensation, but now many employees may see their paycheck slashed simply on the basis of working from home instead of commuting to the office. 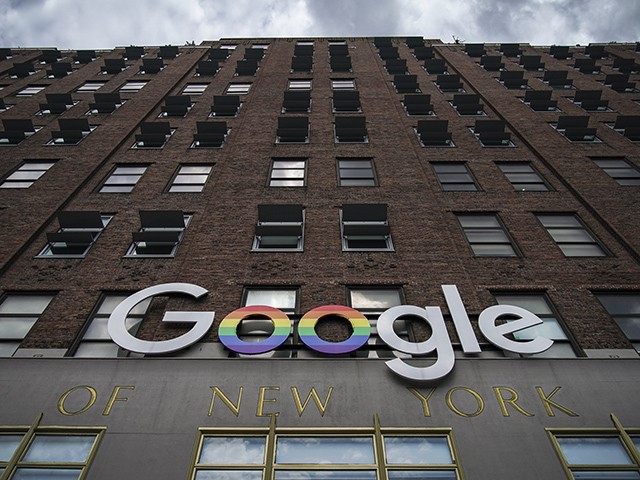 NEW YORK, NY – JUNE 3: The Google logo adorns the outside of their NYC office Google Building 8510 at 85 10th Ave on June 3, 2019 in New York City. Shares of Google parent company Alphabet were down over six percent on Monday, following news reports that the U.S. Department of Justice is preparing to launch an anti-trust investigation aimed at Google. (Photo by Drew Angerer/Getty Images)

Google has released a pay calculator that allows employees to gain a better understanding of the effect of working remotely or moving offices. Many Google employees have been reluctant to return to the office due to coronavirus, and the issue has become larger since the Masters of the Universe announced it would be requiring all workers returning to its offices to provide proof of vaccination.

Currently, Google plans to implement this new payscale calculation in the United States only. A Google spokesperson commented on the situation stating: “Our compensation packages have always been determined by location, and we always pay at the top of the local market based on where an employee works from.”

The added: “Our new Work Location Tool was developed to help employees make informed decisions about which city or state they work from and any impact on compensation if they choose to relocate or work remotely.”

One Google employee who works in Seattle but faces a two-hour commute to Google offices told Reuters that they were facing a 10 percent pay cut for choosing to work remotely. “It’s as high a pay cut as I got for my most recent promotion,” the employee said. “I didn’t do all that hard work to get promoted to then take a pay cut.”

Jake Rosenfeld, a sociology professor at Washington University in St. Louis, commented on the situation stating: “What’s clear is that Google doesn’t have to do this. Google has paid these workers at 100% of their prior wage, by definition. So it’s not like they can’t afford to pay their workers who choose to work remotely the same that they are used to receiving.”