Donald Trump Jr. called out news “trustworthiness” browser plug-in NewsGuard over its “inherent bias,” Friday, after Media Matters was given a green rating by the Microsoft partner, despite the partisan outlet keeping an article which attacked conservatives who called Jussie Smollett’s debunked “hate crime” a hoax.

“Media Matters still arguing that the Smollett attack was not a hoax, and they of course are ‘Newsguard certified’ green check mark,” Trump Jr. declared. “That’s the problem with leftists policing ‘the news’. Newsguard Certified means nothing… if anything it probably means inivetable [sic] bias.”

Media Matters still arguing that the Smollett attack was not a hoax, and they of course are “Newsguard certified” green check mark.
That’s the problem with leftists policing “the news”. Newsguard Certified means nothing… if anything it probably means inivetable bias. https://t.co/xqXwk1da1T

As noted by Trump, NewsGuard does give the story its green seal of approval as “real news.”

NewsGuard, which purports to separate real news from fake news and which, unlike most plug-ins, is included in Microsoft’s mobile Edge browser by default only requiring user activation, rated many articles which took actor Jussie Smollett’s hate crime hoax at face value, and blamed Trump supporters, as credible news.

A story published by GQ, titled, “The Racist, Homophobic Attack on Jussie Smollett Is Far-Right America’s Endgame,” was given the all-clear by NewsGuard, which claimed GQ “generally maintains basic standards of credibility and transparency.”

GQ has since changed the title of the article to “The Racist, Homophobic Attack on Jussie Smollett Is America’s Endgame,” and included a small disclaimer noting that the “hate crime” was a hoax.
Left-wing website Salon was given a green rating from NewsGuard on one of its stories which claimed that questioning whether Smollett’s now-debunked “hate crime” attack actually happened was “hate-crime denial,” despite the red flags, and a Vanity Fair article which claimed without skepticism that Smollett had been “the victim of a racist, homophobic attack,” was also given a green rating from NewsGuard. 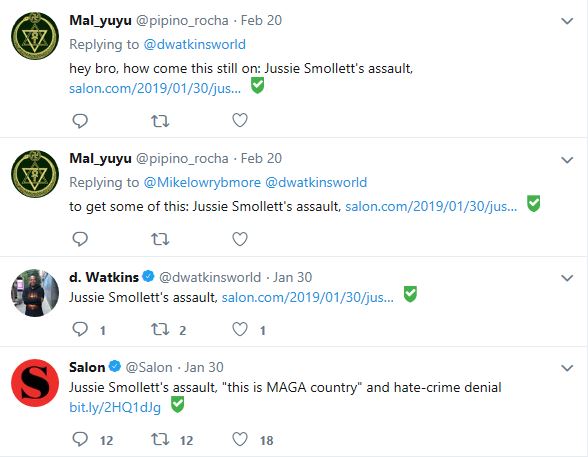 An article on AlterNet which called out conservatives for claiming the alleged “hate crime” was a hoax was also rated as credible by NewsGuard.

AlterNet has a green rating from NewsGuard, despite the plugin admitting that the website fails to handle “the difference between news and opinion responsibly.”

It is not the first time that NewsGuard has deemed articles about hoaxes to be credible.

As reported by Breitbart News’ John Nolte, NewsGuard gave its “seal of approval” for “Rolling Stone’s 2014 hoax about a gang rape at the University of Virginia (UVA).”

“Rolling Stone (which NewsGuard gave a passing grade) was eventually forced to retract the story and settle some lawsuits, but the far-left HuffPost’s aggregation of Rolling Stone’s proven lie is still live, and that green checkmark is NewsGuard’s way of telling readers they are reading something credible,” Nolte explained.

Breitbart News, WikiLeaks, the Drudge Report, and many other websites and news outlets are currently on NewsGuard’s media blacklist, while BuzzFeed, CNN, the New York Times, NPR, and Reuters are all rated as trustworthy by NewsGuard, despite them having a history of publishing fake, or misleading news.

As previously reported, “NewsGuard’s advisory board is mostly made up of alumni from the presidential administrations of George W. Bush, Bill Clinton, and Barack Obama, and many of the members have previously spread inaccurate information, promoted conspiracy theories, and engaged in unethical journalism.”