Journalists from the New York Times, Washington Post, and Bloomberg promoted a “completely fake” statistic “that doesn’t seem to exist” about sexism in technology this week.

Last week, the New York Times published an article claiming, “In a 2016 experiment conducted by the tech recruiting firm Speak With a Geek, 5,000 résumés with identical information were submitted to firms. When identifying details were removed from the résumés, 54 percent of the women received interview offers; when gendered names and other biographical information were given, only 5 percent of them did.”

The validity of these statistics which subsequently went viral on social media, however, were called into question by Vox staff writer Kelsey Piper.

“This statistic was so far off their experiences and mine that I was instantly suspicious. So I dug into it,” posted Piper on Twitter. “The ‘study’ was conducted by tech recruiting firm ‘Speak With a Geek’. It was first covered [at CNET]. It also got coverage a few other places. No one, anywhere, linked to the study. The study does not appear to have been published anywhere.”

“Speak With a Geek, the recruiting firm cited, no longer has a web page. Their social media accounts are dead and have been for a while,” she continued, adding, “The study doesn’t seem to exist. You can’t read it anywhere. The only info we have is what’s in the media.”

Piper then noted that the statistics don’t make any sense, before concluding, “I think a sleazy recruiting co now out of business did something weird — not speculating as to what — and got numbers totally out of line with reality and all other research in the area. They got a couple writeups from a couple of outlets… that were okay with the fact no methodology was public and the details of the study were unclear and that there was no study, or even a blog post by the people who say they did the study, to link to. Then, through some kind of telephone, this ended up in the New York Times.”

An editor for Quanta Magazine and a Bloomberg writer were just two journalists who acknowledged that the statistics they shared were actually fake news.

“I just deleted this tweet, because of evidence that the data might be unreliable. The author of the NYTmag article is going to dig deeper and correct the piece if necessary,” declared Quanta editor Natalie Wolchover, while Bloomberg Opinion writer Noah Smith admitted, “Unfortunately, a study showing massive sexism in the tech industry, which was retweeted over a thousand times earlier today, including by me, appears to have been completely fake.”

I just deleted this tweet, because of evidence that the data might be unreliable. The author of the NYTmag article is going to dig deeper and correct the piece if necessary.

FYI, blind hiring in tech still makes a big difference, even if not 5 –> 54%: https://t.co/IYSFZNEuuB pic.twitter.com/6mkRN2P7aE

Unfortunately, a study showing massive sexism in the tech industry, which was retweeted over a thousand times earlier today, including by me, appears to have been completely fake. https://t.co/UvxDuXchnc

“I, a credulous idiot, was suckered in by fake news[…] Sorry for helping to spread the lies in the first place! Sadly, lies seem to get 10x the retweets that truth does,” continued Smith, adding that he “lazily did not” do any research to confirm the report.

Well, "unfortunate" in that I, a credulous idiot, was suckered in by fake news.

Fortunate in that the result itself wasn't real.

Sorry for helping to spread the lies in the first place! Sadly, lies seem to get 10x the retweets that truth does…

And thanks for doing the legwork I lazily did not do…

Clive Thompson, the New York Times Magazine journalist who cited the statistics in his article about female coders last week, also claimed to be “looking into” their validity.

Here's solid @kelseytuoc thread questioning a stat in my piece. I indeed relied on the CNET coverage of this one, b/c the company seemed to have closed shop. I take @kelseytuoc's point seriously, so I'm looking into it, and if that data isn't reliable, I'll ask for a correction. https://t.co/dWLQeleUVc

In a 2016 experiment, 5,000 identical resumes were submitted to tech companies. When identifying details were removed from the resumes, 54% of the women got interviews. When names and other biographical information were included, only 5% of them did https://t.co/qQljfJhPVC

NewsGuard, the anti-fake news app included by default on Microsoft’s mobile Edge browser, gives links to the New York Times article with the false statistic a perfect rating, claiming it “adheres to all nine of NewsGuard’s standards of credibility and transparency.” 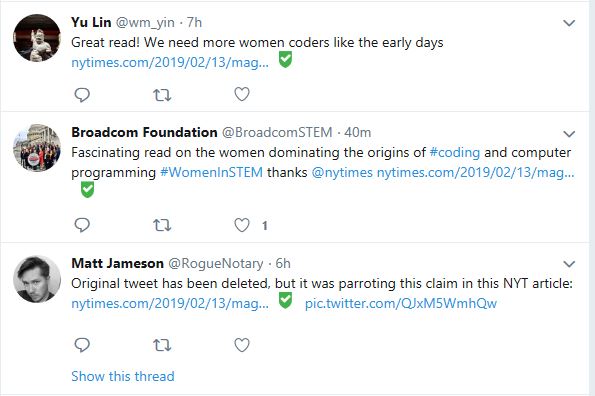 According to NewsGuard, the New York Times “Does not repeatedly publish false content,” “presents information responsibly,” and “Regularly corrects or clarifies errors.”

Breitbart News, WikiLeaks, and the Drudge Report are all on NewsGuard’s fake news blacklist.