Despite Microsoft and NewsGuard working to brand the Drudge Report as “fake news,” the conservative news website was the first to break the news about the temporary re-opening of the government in a monster scoop of the NewsGuard approved establishment media.

Recently, Microsoft teamed up with NewsGuard, a web browser extension app which has become a default extension in Microsoft’s Edge mobile browser. Advised by individuals such as Tom Ridge, the first Secretary of Homeland Security for the George W. Bush administration; Richard Stengel, the former editor of Time magazine and Undersecretary of State for Public Diplomacy for the Obama administration; and Don Baer, the chairman of Burson, Cohn & Wolfe and former White House Communications Director for the Clinton administration; Newsguard aims to apply rankings of “trustworthiness” to individual news websites in an attempt to fight “fake news.”

NewsGuard has marked both Breitbart News and the Drudge Report as “fake news,” calling the credibility of both sites into question. However, the Drudge Report was the first to break the recent news that the President has worked with lawmakers to re-open the government.

The Drudge Report is primarily a link aggregator but also breaks news with remarkable accuracy.

Drudge is reporting an agreement to re-open the government. https://t.co/vR0Rvk86YZ pic.twitter.com/ittSZ9P79t

Despite the fact that the Drudge Report was correct and posted real news before the entire media, NewsGuard brands the site as fake news, warning users to reconsider visiting the page both on Google and in social media posts: 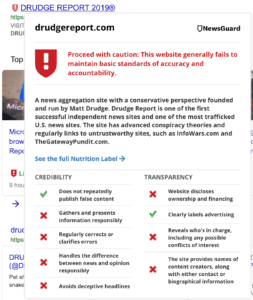 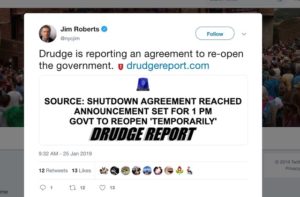 From a Breitbart News report:

“I’m very proud to announce today that we have reached a deal to end the shutdown and reopen the federal government,” Trump said in the Rose Garden. Trump also disussed the option of using a “very powerful alternative,” meaning a declaration of a national emergency to build the wall with executive authority in contravention of Congress, but said “I did not want to use it at this time.”
“In a short while, I will sign a bill to reopen our federal government for three weeks until Feb.15,” Trump said, confirming details first reported by the Drudge Report and subsequently confirmed by other media outlets. He said that he will ensure federal employees will receive back pay “very quickly.”

Trump also said this deal will trigger a bipartisan conference committee on Capitol Hill to begin reviewing a request from the Department of Homeland Security (DHS) for a border wall.

“Walls should not be controversial,” Trump said, adding that Border Patrol agents have told him that “walls work” citing previous Democrat support for barriers on the border and foreign countries like Israel that have built walls to protect their borders.

Trump ended his White House Rose Garden remarks by noting that if the Congress does not reach a deal by Feb. 15, the government will shut down again or he will use the executive authority for a declaration of a national emergency to build the wall.

While NewsGuard claims that they are fighting “fake news” and publications which are untrustworthy, they are in fact targeting websites that break important national news on a regular basis.

Similar scrutiny is, however, not applied to websites that publish fake news about high school students. Breitbart News will be keeping a close eye on developments at NewsGuard.

Breitbart News has requested comment on this story from Microsoft.