NewsGuard, the news publication ranking extension run by establishment media figures along with former Clinton, Obama and Bush administration members, has rated a number of websites which wrongly attacked the students of Covington Catholic High School as “trustworthy.”

NewsGuard is a web browser extension app which has recently become a default extension in Microsoft’s mobile edge browser. Advised by individuals such as Tom Ridge, the first Secretary of Homeland Security for the George W. Bush administration; Richard Stengel, the former editor of Time magazine and Undersecretary of State for Public Diplomacy for the Obama administration; and Don Baer, the chairman of Burson, Cohn & Wolfe and former White House Communications Director for the Clinton administration; Newsguard aims to apply rankings of “trustworthiness” to individual news websites in an attempt to fight “fake news.”

In practice, NewsGuard creates a news blacklist primarily aimed at sites not favored by the establishment, including Breitbart News, the Daily Mail, and the Drudge Report.

However, many of the sites that NewsGuard has ranked as “trustworthy” have spent their past few days smearing the names of the students of Covington Catholic High School. Websites such as the National Review Online, CNN, the New York Times, the Washington Post and many others condemned the students for their actions, but shortly after the video went viral, a new version of events was revealed. Breitbart News reporter Kristina Wrong wrote in an article:

The short clip made it appear that the student, Nicholas Sandmann, was staring down Phillips, trying to intimidate him. An interview with Phillips after the confrontation showed him wiping away tears, talking about how he was intimidated by the students.

Voices on the left — and some on the right — rushed in to condemn the boys, some even calling for them to be physically hurt.

However, by Sunday, a fuller video of the incident emerged, showing “Black Israelite” protesters taunting the students with insults and gay slurs, and then Phillips approaching the boys where they were waiting for their bus to leave.

However, multiple mainstream outlets condemned the students of Covington Catholic High School before the full story was understood.

The National Review Online published an article titled  “The Covington Students Might as Well Have Just Spit on the Cross,” in which Deputy Managing Editor Nicholas Frankovich described the actions of the Covington students writing: “They mock a serious, frail-looking older man and gloat in their momentary role as Roman soldiers to his Christ. ‘Bullying’ is a worn-out word and doesn’t convey the full extent of evil on display here.” He continued: “Decide for yourself who is more pleasing to Christ, Phillips or his mockers. As for the putatively Catholic students from Covington, they might as well have just spit on the cross and got it over with.”

Since then, the NRO has retracted the article. NewsGuard also rates the NRO as extremely trustworthy: 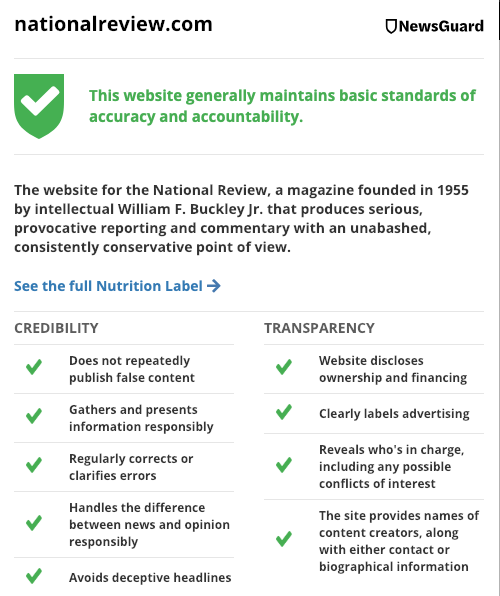 The New York Times alleged that the students had been mocking a “Vietnam veteran” when refusing to back down from Phillips. It was later discovered that Phillips had only served in the military during the Vietnam era and was never deployed to Vietnam during the war. The Times amended their article simply stating: “interviews and additional video footage have offered a fuller picture of what happened in this encounter.” Since the publishing of that article, L.A. trial attorney Robert Barnes offered to represent the students of Covington to sue Maggie Haberman, the reporter that wrote the article.

Despite the blatant misrepresentation of these events, NewsGuard has awarded the New York Times with a trustworthy score, giving them a green light on each criteria, including “gathers and presents information responsibly.” 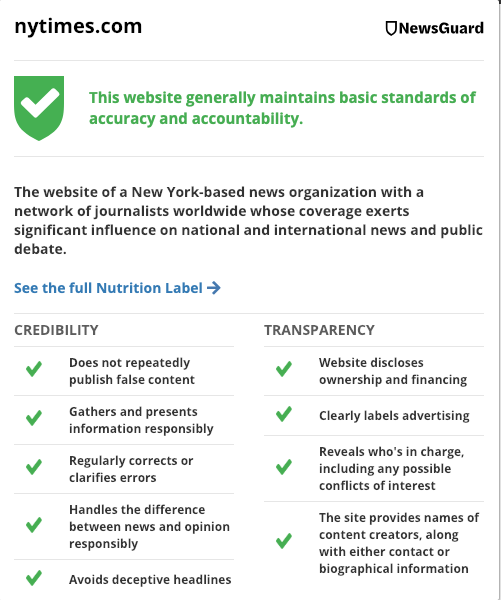 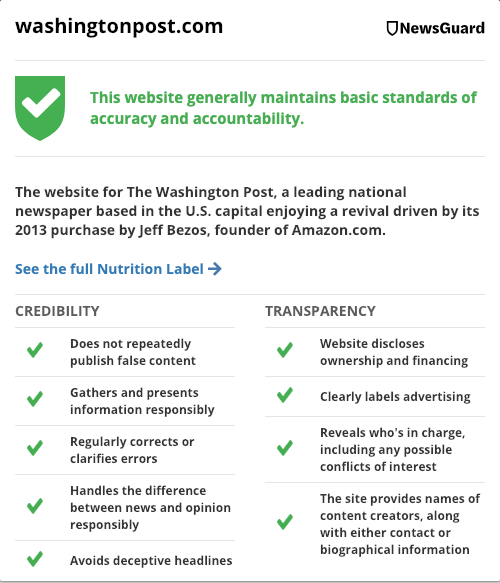 Similarly CNN spoke negatively of the Covington Catholic students before the full story was clear. CNN co-host Dave Briggs stated on air: “One thing is clear, the MAGA hats clearly caused an overreaction by everyone on both sides. Again, I would like to hear from all of you. There was clearly some misunderstanding on both sides. That young man there does not look like someone who he is appreciative and considerate of this culture and of this chant going on,” Briggs continued.  “[There’s] clearly two sides of the story. The problem is we all overreact so instantly with these stories, and now the MAGA hats stand for a certain thing to a lot of people. Hopefully, some understanding and some positive learning comes out of this.” Unsurprisingly, CNN also receives an extremely trustworthy rating: 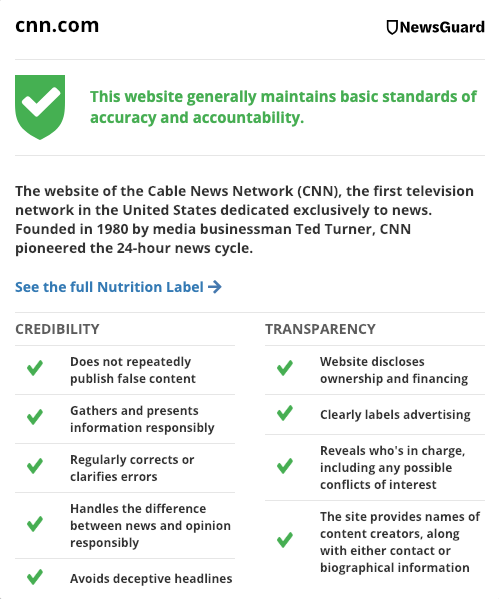 New York Daily News columnist Brandon Friedman also called for the identity of Nick Sandmann, who was unknown at the time, to be made public:

1. "Because he's a kid" is no reason to withhold his identity. If you want to say, "because his behavior doesn't warrant ruining his life," then we can have that debate. But his age alone should not protect him from consequences. I'll show you why in the next tweet. https://t.co/TsY8YM74XC

The New York Daily News does not receive quite as stellar a recommendation as some of the other websites that NewsGuard verifies, but still receives quite a trustworthy rating: 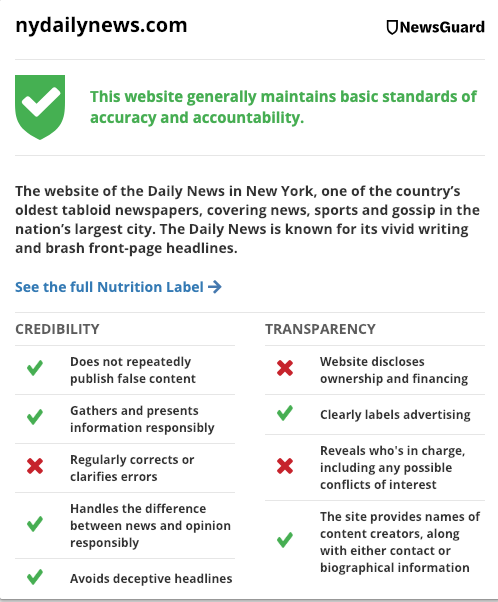 Leftist publication the Huffington Post has yet to retract or change its open letter article titled: “To The Teachers And Parents Of Covington Catholic High School,” which alleges that the Covington students acted in a racist manner towards the Native Americans at the scene and condemns the children’s parents and teachers for the situations. The article’s author states, “For many in this country, MAGA hats amount to an explicit message of racial intolerance and bigotry,” and claims that the Covington chaperones should have forbid the students from wearing them as they had “the potential to inflame and frighten others.”

The article essentially claims that the students were asking for a fight due to the hats they were wearing. The article also derides the students for believing in rights such as free speech, stating: “Combine that with the common belief of teen boys in their absolute right of freedom of speech and expression, their ignorance of how they appear to others, and the emboldening effect of a large group, and the whole thing was entirely foreseeable.” 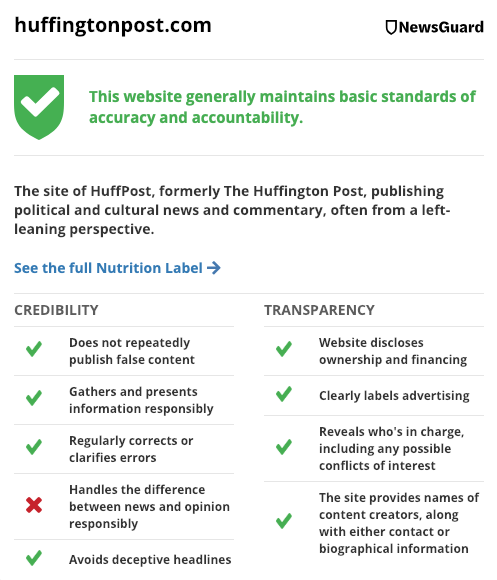 So while NewsGuard claims to rank news websites based on trustworthiness and their publication of “fake news,” it appears that this rule does not apply to websites that publish articles falsely accusing young high school students of racism. Breitbart News will be keeping a close eye on developments at NewsGuard.