Microsoft partner and browser plug-in provider NewsGuard lists news publications as credible even though they have had multiple corrections, misleading, and even false stories, which calls into question NewsGuard’s ability to identify reputable news sources.

BuzzFeed
Buzzfeed released a bombshell report last week, citing two unidentified law enforcement officials, which alleged that President Trump directed then-personal attorney Michael Cohen to lie to Congres and that he regularly told the president and his family about the Trump Tower project in Moscow, Russia.

Special Counsel Robert Mueller came out in a rare statement and said that the BuzzFeed report was “not accurate.”

NewsGuard suggested that BuzzFeed “maintains basic standards of accuracy and accountability,” although, it remains to be seen what repercussions will come to those staffers and the editors who released the erroneous Mueller report last week.

The NewsGuard rating for Buzzfeed, which gives it a green checkmark in every category, can be seen below: 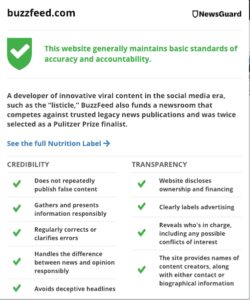 NewsGuard states that CNN serves as a reputable news organization even though in June 2017 three CNN employees resigned after CNN was forced to retract a hit piece on President Donald Trump and his associates.

The false report alleged that the Senate Intelligence Committee and Treasury Department were probing a Russian investment fund with ties to senior Trump allies such as Anthony Scaramucci, using a single anonymous source.

“That story did not meet CNN’s editorial standards and has been retracted. Links to the story have been disabled. CNN apologizes to Mr. Scaramucci,” CNN wrote in their retraction.

The NewsGuard rating for CNN, which gives it a green checkmark in every category, can be seen below: 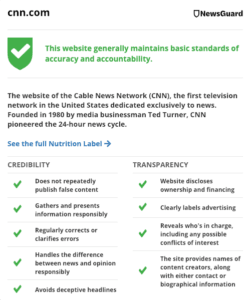 In January, the New York Times was forced to issue a correction after they falsely reported that Paul Manafort passed along polling information to a Kremlin-connected businessman.

“A previous version of this article misidentified the people to whom Paul Manafort wanted a Russian associate to send polling data,” the correction reads at the bottom of the article.

The NewsGuard rating for New York Times, which gives it a green checkmark in every category, can be seen below: 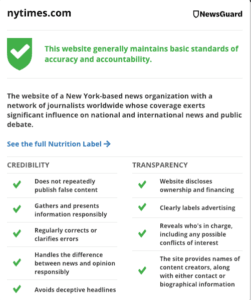 NewsGuard deems NPR a reputable source of news despite that a false report by the news organization in November 2018 which claimed that Donald Trump Jr. had perjured himself before the Senate Judiciary Committee.

The NewsGuard rating for NPR, which gives it a green checkmark in every category, can be seen below: 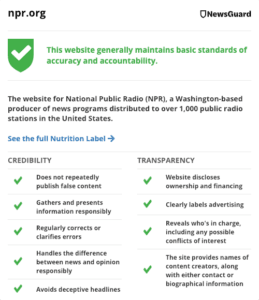 In NewsGuard’s credibility section, the fake news app suggests that Reuters does not write deceptive headlines even though they sparked controversy in the cryptocurrency world in January 2018.

However, an update to the story conceded that lawmakers have not even drafted a bill, and if they were to draft legislation, “could take months or even years.”

The NewsGuard rating for Reuters, which gives it a green checkmark in every category, can be seen below: 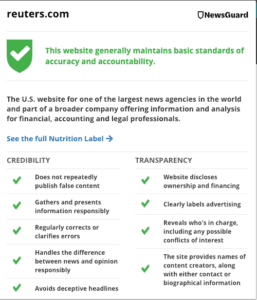