Panama’s foreign minister warns that as many as 60,000 Haitian migrants are likely headed to the U.S. after passing through her country. The new wave of Haitians follows the release by the Biden Administration of thousands from the Del Rio brdige camp crisis earlier this month. 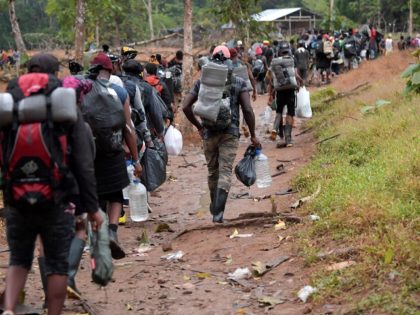 El Centro Sector Border Patrol agents rescued three migrant children and a parent who became lost in the California mountains near Mexico. The agents found the group after they activated a rescue beacon. 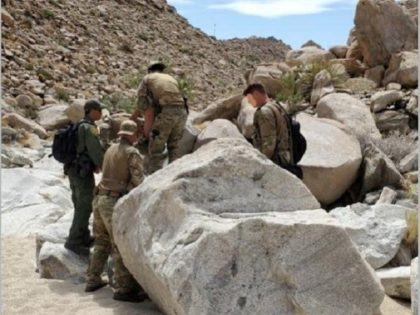 More than one hundred visitors and residents in the Texas border city of McAllen attended a rally and march to the border wall to shed light on the dangers of child trafficking. One guest speaker at the event, Karla Jacinto, recounted her story as a victim of child trafficking at the age of 12. 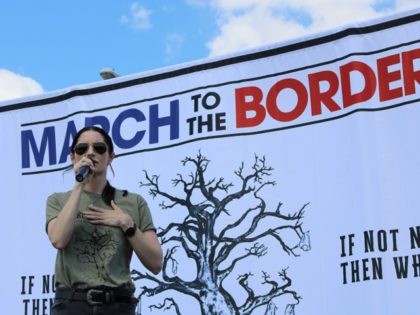 Cartel-connected human smugglers moved their operations from hiding in the remote outskirts of Miguel Aleman, Tamaulipas, Mexico to the heart of this Texas border city less than one hundred yards from the Roma International Bridge. The smugglers faced no opposition from Mexican law enforcement authorities as they crossed hundreds of Central American migrants into the United States. 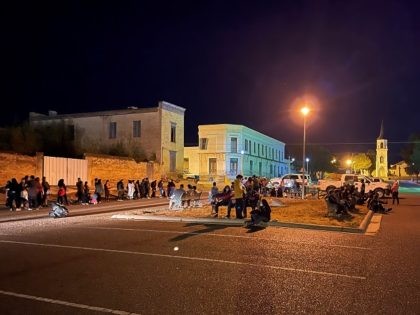 Border Patrol agents in the Big Bend Sector of West Texas report that large groups of migrants continue to run in an effort to escape apprehension. The agents say the fleeing migrants are no match for their speed and they apprehended all of them. 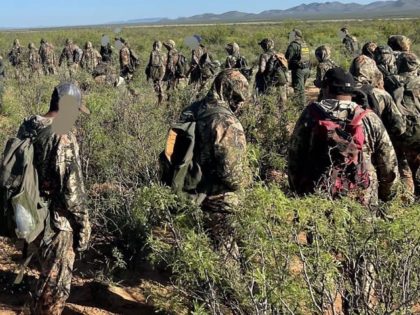 Just days after Department of Homeland Security Secretary Alejandro Mayorkas announced, “our borders are not open,” more than 200 Central American migrants crossed the Rio Grande unimpeded and walked into La Joya, Texas. The steady stream of migrants crossing into the border city continues day and night, according to Border Patrol agents on the ground. 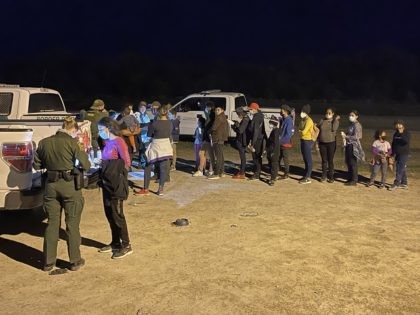 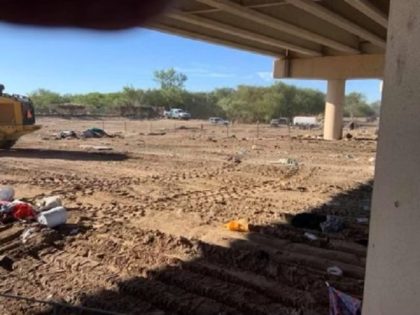 DHS Reports Only 1400 Haitian Migrant Removals from U.S. This Week

Department of Homeland Security officials report the removal of only 1,401 Haitian migrants via repatriation flights since Sunday. On Sunday, the population of the Del Rio Migrant Camp peaked at more than 15,000. Roughly 5,000 remain in the camp as of Thursday morning. 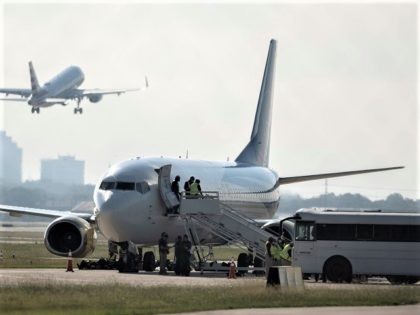 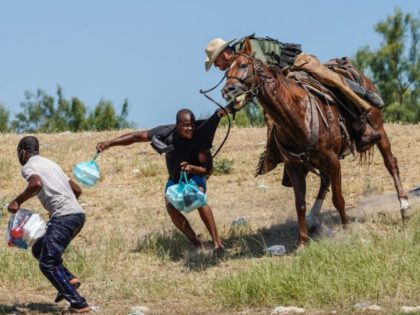 DEL RIO, Texas — Governor Greg Abbott ordered the Texas Department of Public Safety and National Guard to use vehicles to create a miles-long barrier to stop the flow of mostly Haitian migrants from crossing the Rio Grande. The vehicle barrier, along with the recently constructed Texas border fencing, effectively blocked the illegal crossings and enabled Border Patrol officials to reduce the population of the Del Rio migrant encampment. 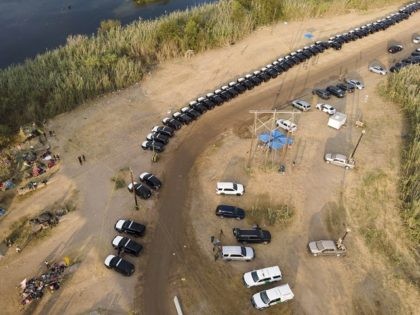 Media outlets report that despite promises from DHS Secretary Alejandro Mayorkas, Haitian migrants are being released into the U.S. interior. One official told the Associated Press the number of migrants released in recent days is in the thousands. 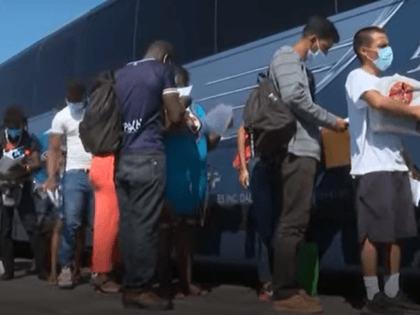 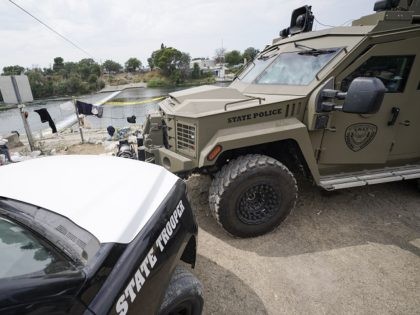 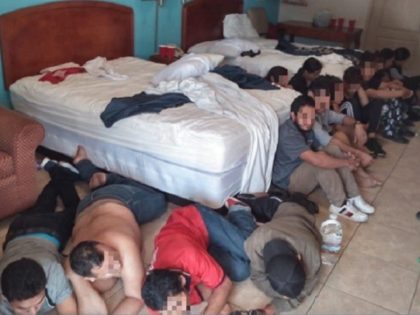 DEL RIO, Texas — Department of Homeland Security Secretary Alejandro Mayorkas told reporters Monday that his agency is stepping up the number of daily flights to remove Haitian migrants from the makeshift camp along the Rio Grande border with Mexico. The secretary stressed that irregular migration is not safe and will not be tolerated. 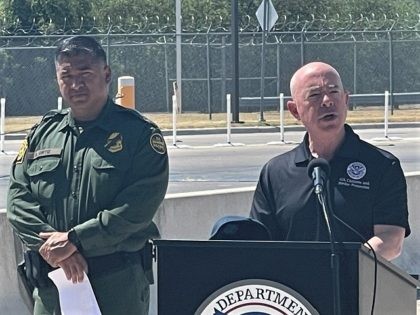 The United States and Mexico began flying Haitian migrants back to their home country on Sunday afternoon. The flights took hundreds of migrants who had previously been detained at the makeshift migrant camp in Del Rio, Texas, back to Haiti. 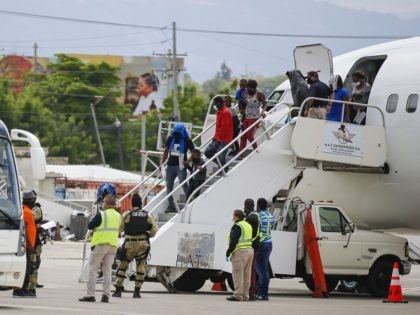 ‘They Will Be Removed,’ Says Border Patrol Chief at Texas Migrant Camp

The Chief of the United States Border Patrol, Raul Ortiz, told reporters the thousands of migrants gathered at the makeshift camp in Del Rio, Texas, will be removed to their country of origin.  His comments came during a press conference near the scene where more than 12,000 mostly Haitian migrants are being held. 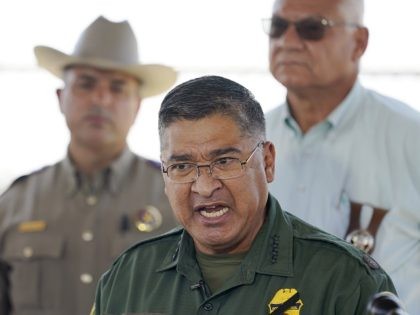 The crisis unfolding at a makeshift camp of nearly 15,000 mostly Haitian migrants under the Del Rio International Bridge has a devastating impact on the local community of Del Rio, Texas. Although mostly out of the public eye due to the remote location of the camp, residents are feeling the impact in the small Texas town. The closure of ports of entry leading to Acuna, Coahuila, Mexico, forced many local businesses in Del Rio to operate with fewer employees. 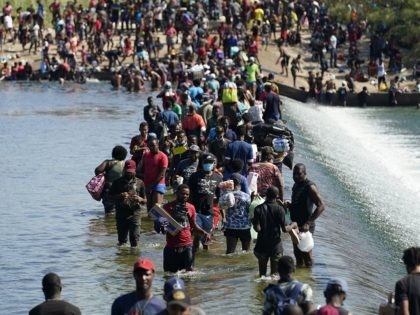 The flow of mostly Haitian migrants continued unabated into a makeshift camp on the banks of the Rio Grande at Del Rio, Texas. Breitbart Texas captured video of the non-stop flow of migrants across the Rio Grande between Acuna, Coahuila, Mexico, and the camp in Texas. The camp is currently populated by more than 14,000 migrants living outdoors in the encampment. 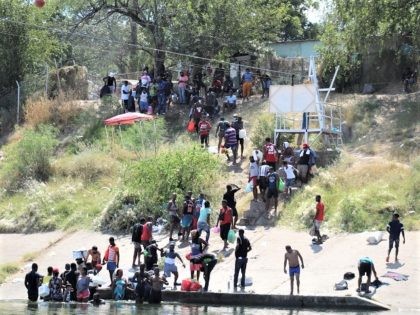 Mexican authorities in the state of Tamaulipas stopped more than 15 buses with approximately 400 to 500 migrants heading to the border with Texas. Once the migrants got off the buses, they continued walking north while several motorists gave them rides. 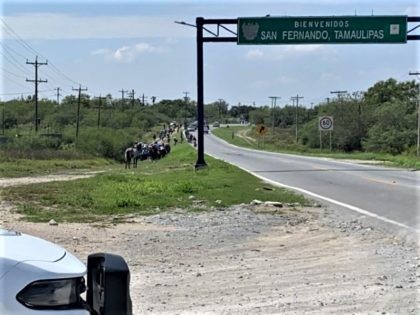 DEL RIO, Texas — A Breitbart Texas video shows a group of Venezuelan men and a Colombian woman crossing the border from Mexico near Del Rio, Texas. The crossing took place about a mile upstream from the mostly Haitian migrant 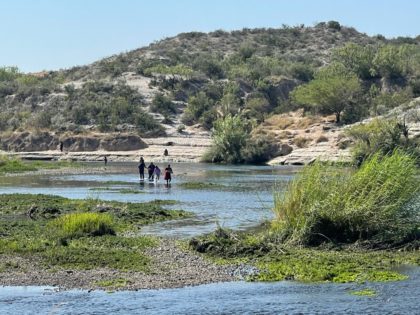 The Department of Homeland Security released a six-point plan on Saturday to address the current humanitarian crisis at the border in Del Rio, Texas. The announcement comes as the migrant camp under the Del Rio International Bridge grew to more than 14,000 mostly Haitian migrants. 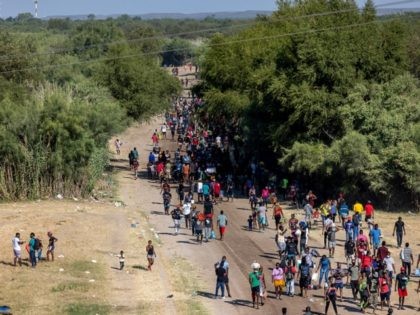 The Biden Administration stated on Saturday that “our borders are not open.” The statement comes as the number of mostly Haitian migrants being detained after freely crossing the border from Mexico rose to more than 14,000. 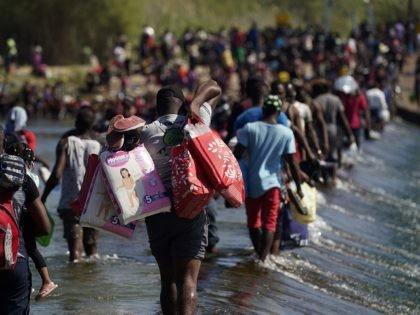 Big Bend Sector Border Patrol agents apprehended 49 migrants found locked inside a tractor-trailer at the Interstate 10 immigration checkpoint. The apprehension at the checkpoint comes on the same day Border Patrol officials closed similar checkpoints in the Del Rio Sector. Officials have subsequently closed the Laredo Sector checkpoints in an attempt to divert additional resources to the humanitarian crisis in Del Rio, Texas. 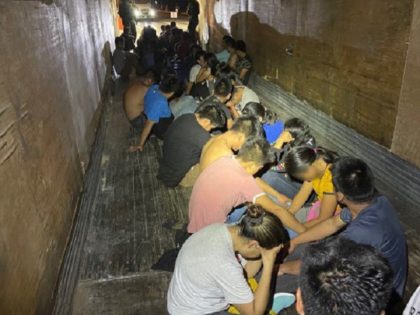 U.S. Border Patrol officials closed all highway immigration checkpoints operating in the Laredo Sector on Friday evening in response to the Haitian migrant crisis unfolding in Del Rio, Texas, according to a source within Customs and Border Protection. The Laredo Sector operates six permanent checkpoints including one of the busiest checkpoints in the nation located on the I-35 Interstate corridor between Laredo and San Antonio. 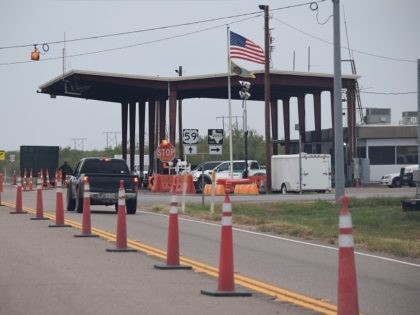 REPORTS: Biden Admin to Expel Thousands of Migrants at Border on Flights Back to Haiti

The Biden administration will reportedly begin expelling thousands of Haitian migrants to their home country beginning on Sunday. Multiple news outlets report that U.S. Immigration and Customs Enforcement will begin flights on Sunday to move the migrants gathered under a border bridge in Texas back to Haiti. 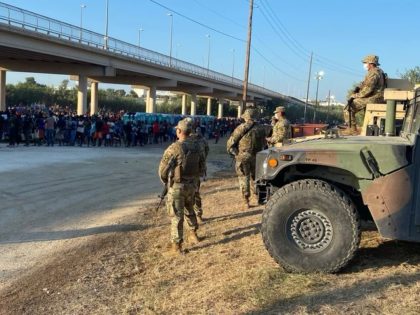 U.S. Customs and Border Protection officials announced the closure of both international bridges in Del Rio, Texas, on Friday evening. The closures come as the migrant camp crisis under one of the bridges continues to worsen.

The mayor of the border city of Del Rio, Texas, declared a state of disaster on Friday as migrants continue to pour across from Mexico. Calling the situation “dire,” the mayor shut down the toll booths on the Del Rio International Bridge and closed it to traffic as a security measure. 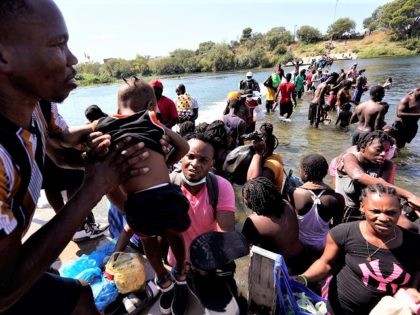 State, Federal Officials Dispute Whether Texas Was Asked to Shut Down Border ‘Ports of Entry’ Due to Migrant Crisis

Texas Department of Public Safety officials reported via Twitter early Thursday morning that someone from U.S. Customs and Border Protection contacted them to request assistance in shutting down “ports” of entry in the Del Rio area. DPS claims CBP later reversed or denied ever making the request. 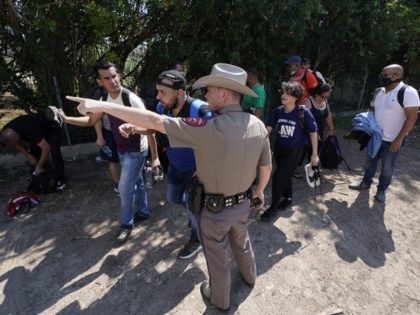 ‘Nobody is Being Tested for Anything,’ Says Texas Sheriff at Migrant Bridge Camp

Val Verde County Sheriff Joe Frank Martinez says the Biden administration is not testing any of the nearly 10,000 migrants being held in a makeshift border camp for COVID or anything else. He said they are alone at the border dealing with a national issue. 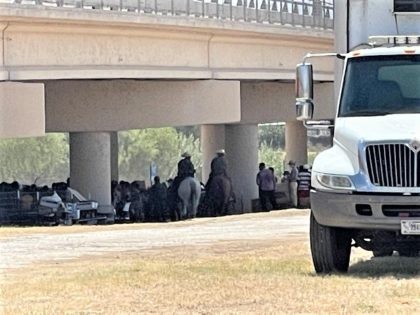 WATCH: Thousands of Migrants Walk Freely Across Border into Texas near Bridge Camp

A video tweeted by Congressman Chip Roy (R-TX) shows a steady stream of migrants crossing the Rio Grande near Del Rio. The thousands of mostly Haitian migrants can be seen crossing freely in both directions across the river the separates Texas and Mexico. 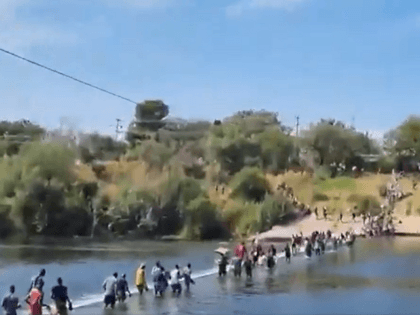