Senator Rick Scott (R, FL) is calling on NBA Commissioner Adam Silver to answer for his league’s silence over the “ongoing genocide” taking place in China.

In addition, Scot is urging the league to support his call to move the 2022 Bejing Olympics out of communist China and into a country that “respects human rights.”

The NBA has maintained longstanding business ties with China through many lucrative broadcasting deals, player endorsements, and apparel sales and manufacturing arrangements using Chinese labor. Labor which, reportedly and almost assuredly, is being provided by Uyghur Muslim slaves in Xinjiang.

The league terminated a basketball training academy it had operated in Xinjiang in 2020.

“I write to request a meeting at the soonest possible date for us to discuss the NBA’s involvement in Communist China,” Scott wrote.  As I am sure you know, I have been vocal about the league’s use of Communist Chinese-made apparel, its decision to crack down on Daryl Morey after his comments about protests in Hong Kong, the abuse of young players at NBA academies, and your organization’s silence about Communist China’s horrific human rights abuses and the ongoing genocide against Uyghur Muslims in Xinjiang. I have also urged the NBA to support my call to move the 2022 Olympic Games out of Communist China and to a country that actually respects human rights. Sadly, you have chosen to be silent on this as well.” 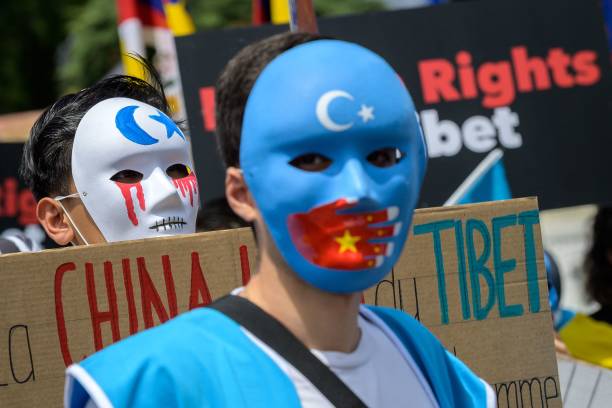 Tibetan and Uyghur activists wear masks during a protest against Beijing 2022 Winter Olympics in front of the Olympics Museum in Lausanne on June 23, 2021 as some 200 participants took part to the protest. (Photo by Fabrice COFFRINI / AFP) (Photo by FABRICE COFFRINI/AFP via Getty Images)

Scott continued, “I want to be very clear – the issues I have outlined are neither speculative nor subject to debate. These are facts. The NBA has done nothing to stand up to Communist China, and in some ways has taken actions that seem to have no purpose other than to please General Secretary Xi’s murderous and tyrannical Communist Chinese government.”

Scott further reminded the league that they have a voice for freedom and human rights in China in their midst, in Boston Celtics center Enes Kanter Freedom. Freedom, who began wearing shoes critical of the Beijing regime and openly challenging NBA stars with lucrative business deals in China to stand up to the oppression of the Muslim minorities in China, has seen his playing time until recently. 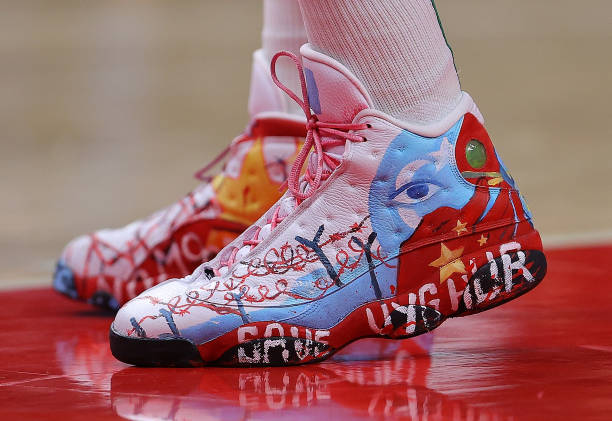 ATLANTA, GEORGIA – NOVEMBER 17: A view of the shoes worn by Enes Kanter #13 of the Boston Celtics against the Atlanta Hawks during the first half at State Farm Arena on November 17, 2021 in Atlanta, Georgia. NOTE TO USER: User expressly acknowledges and agrees that, by downloading and or using this photograph, User is consenting to the terms and conditions of the Getty Images License Agreement. (Photo by Kevin C. Cox/Getty Images)

“I recently had a conversation with Boston Celtics player Enes Kanter Freedom to discuss these matters,” Scott explained. “I admire his bravery and commitment to freedom and democracy across the world. Players like Enes, who recently became an American citizen, should be celebrated by the NBA and held up as an example of courageous advocacy for the common good.”

The NBA has offered no support for Freedom’s stand in support of Uyghur Muslims or his criticisms of communist China.