NBA Commissioner Adam Silver has weighed in on Kyrie Irving’s refusal to take the coronavirus vaccine, and the commissioner’s message to the superstar is simple: “Get vaccinated.”

Silver delivered his recommendation to Irving while reminding the young Brooklyn Nets star of his need to keep not only himself but his family safe.

“I’d tell him to get vaccinated, first and foremost, for himself and his family,” Silver said. “Next, for his teammates and his community, and also for the league that I know he cares so much about.”

“I'd tell him to get vaccinated, first and foremost for himself and his family. Next, for his teammates and his community and also for the league that I know he cares so much about.”

Adam Silver on what he would say to convince Kyrie Irving to get vaccinated pic.twitter.com/CurKihqUVf

Irving, the Nets’ point guard, has not yet been vaccinated against COVID-19, despite New York City’s vaccine mandate, which prevents anyone over 12 years old from entering ‘covered premises’ in the city without proof of vaccination. The Nets announced earlier this month that Irving would not play or practice with the team until he is vaccinated.

Silver said the “science is firmly on the side of getting vaccinated” and claimed that the vaccine has saved “millions of lives.”

“Think where we were when we first stopped the season … and then we went to the bubble and we started last season, and then this vaccine came along and it’s already saved tens of millions of lives,” he said. “And I think at some point, for Kyrie to be an engaged member of society — putting aside this league — he needs to get vaccinated.” 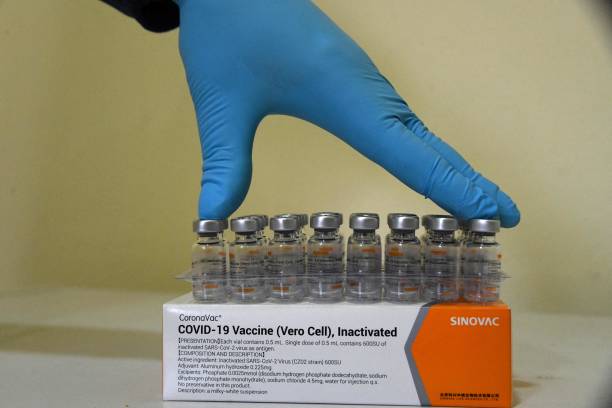 A medical worker holds a vial of the Sinovac vaccine, during a vaccination drive for the AstraZeneca and Sinovac vaccines against Covid-19 in the Syrian town of Jandairis in the countryside of Afrin in the rebel-held Aleppo province on October 19, 2021. (Photo by Rami al SAYED / AFP) (Photo by RAMI AL SAYED/AFP via Getty Images)

Irving has consistently maintained that he is not “anti-vax.” Instead, he sees his refusal to vaccinate as his own “personal decision” and asks that others respect it.

“I’m staying grounded in what I believe in,” he said. “It’s not about being anti-vax or about being on one side or the other. It’s about being true to what feels good for me. I’m still uncertain about a lot of things. And that’s okay. If I’m going to be demonized about having more questions and taking my time to make a decision with my life, then that’s just what it is.”

Irving did not play in the Nets 127-104 opening night loss to the Milwaukee Bucks. As it stands, Irving will be compensated for road games, but not home games. Under that pay scheme, Irving will lose at least $15,580,000 this season.