Colts Owner Jim Irsay said Sunday that he is finding it difficult to “depend” on unvaccinated players such as quarterback Carson Wentz.

Speaking to Fox 59 in Indianapolis, Irsay noted that there are “difficulties” that the team has to deal with these days, especially with quarterback Carson Wentz.

“I know he wants to go. I know how hard he’s worked. I know he’s respected in the locker room and all those sorts of things. But he has to stay healthy. Nobody’s hiding behind the M.O. of the past,” Irsay said. “Since we came here and have been going through the bumps we’ve gone through, there’s been difficulties. It also makes it difficult if you’re not vaccinated because it’s harder to depend on someone if they’re not vaccinated. They have freedom of choice, and we understand that, but we’re hoping he can come back and play well.”

The 28-year-old player suffered torn ACL in 2017, and has had knee injuries, back issues, and foot problems. But the big problem for Irsay today is that Wentz won’t take the coronavirus vaccine.

Wentz was placed on the reserve/COVID list in August after supposedly coming in close contact with someone who tested positive for the virus.

But Wentz has also refused to jump to take the vaccine, saying that it is a “personal decision” whether or not to take a vaccine. 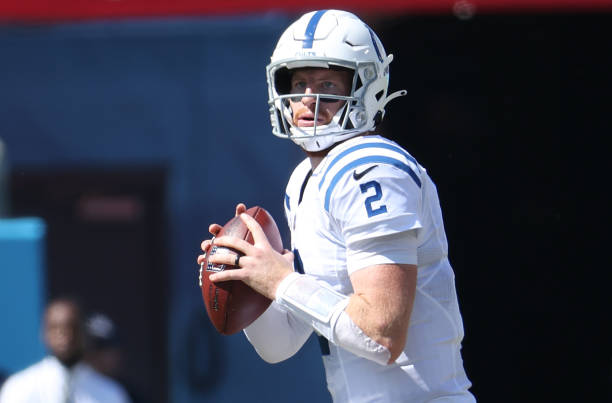 NASHVILLE, TENNESSEE – SEPTEMBER 26: Quarterback Carson Wentz #2 of the Indianapolis Colts looks to pass the ball in the first half of the game against the Tennessee Titans at Nissan Stadium on September 26, 2021 in Nashville, Tennessee. (Photo by Andy Lyons/Getty Images)

“I’m not going to go in-depth on why, but it’s a personal decision for me and my family,” Wentz said on Sept. 2. “I respect everybody else’s decision, and I just ask that everybody does the same for me. I know that’s not the world we live in. Not everyone is going to view things the same. But no one really knows what’s going on in someone else’s household and how things are being handled.”

Wentz added that he has “weighed a lot of things” over his vax status.

“That’s just where I’m at, where I’m at with my family. That’s why understanding the protocol to truly understand everything we can do to avoid what happened this week. It is what it is whether we agree,” he added.