Hamadtou, 48, who lost his arms in a train accident when he was 10 years old, has won silver medals in the 2011 and 2013 African Championships and at the 2013 Egypt Open, ESPN reported. He finished ninth in the team event and 11th in the singles event in the Class 6 table tennis Paralympic category during the Rio Olympics.

Egypt's Ibrahim Hamadtou competes in table tennis using his mouth to hold the paddle and his foot to serve pic.twitter.com/4Oz9IMnmhg

Class 6 is for athletes with severe impairments to arms and legs, including amputations.

“In our village, we could only play, at that time, table tennis and soccer – that’s why I played both,” he told CNN in 2014. “It was logical to play soccer first, due to my case; then I played table tennis as a challenge.”

Hamadtou uses his mouth to hold the bat (paddle), and the toes of his right foot to toss up the ball for the serve. He started as a 13-year-old trying different options, such as holding the bat under his armpit, before settling on holding it with his mouth.

“It was quite difficult playing table tennis after the accident,” Hamadtou told CNN. “I had to practice hard for three consecutive years on a daily basis. At the beginning, people were amazed and surprised seeing me playing. They encouraged and supported me a lot and they were very proud of my willing, perseverance and determination.” 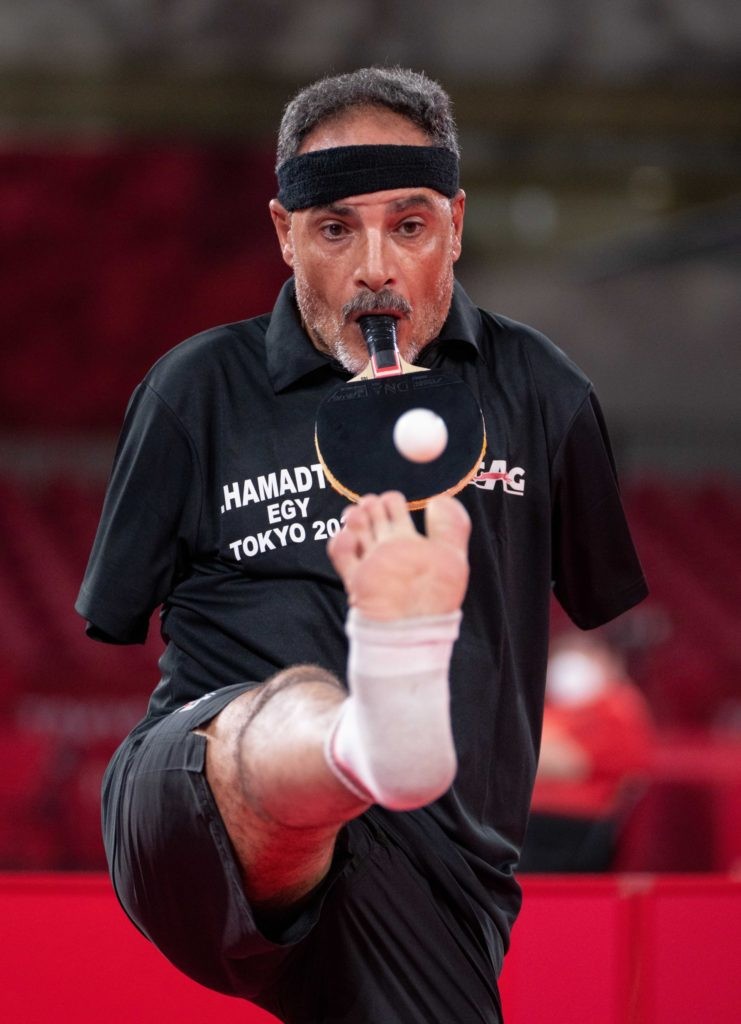 “One of the most important memories that I will never forget was when one of my friends told me to stick to something I could do,” Hamadtou, who is a father of three, told the Olympic Channel. “That remark was the spark that generated something inside of me. The will and determination. I wanted to prove to him that I could practice a sport”:

“I feel really happy playing table tennis. I want to tell everybody that nothing is impossible and everybody should work hard for what you love and what you think is good for yourself. The disability is not in arms or legs, the disability is to not persevere in whatever you would like to do,” Hamadtou said, according to the International Table Tennis Federation (ITTF).

“I was in the club where I was officiating a match between two of my friends,” Hamadtou told the ITTF. “They disagreed on a point. When I counted the point in favour of one of them, the other player told me, do not interfere as you will never be able to play. It was that statement that fired me up to decide to play table tennis.”

Hamadtou is currently competing at the 2020 Tokyo Paralympics. He lost his first match against South Korea’s Park Hong-kyu on Wednesday, but is set to play against China’s Chen Chao on Friday.