TOKYO (AP) — She describes herself as “old.” She concedes she wasn’t sure she’d make it this far. There were times, though, when “making it” had nothing to do with the Olympics and everything to do with simply climbing out of her hospital bed.

No wonder Allyson Felix came to these, her last Olympics, with little fear of losing.

And it shouldn’t surprise anyone by now to learn that instead, on Friday night, she won. 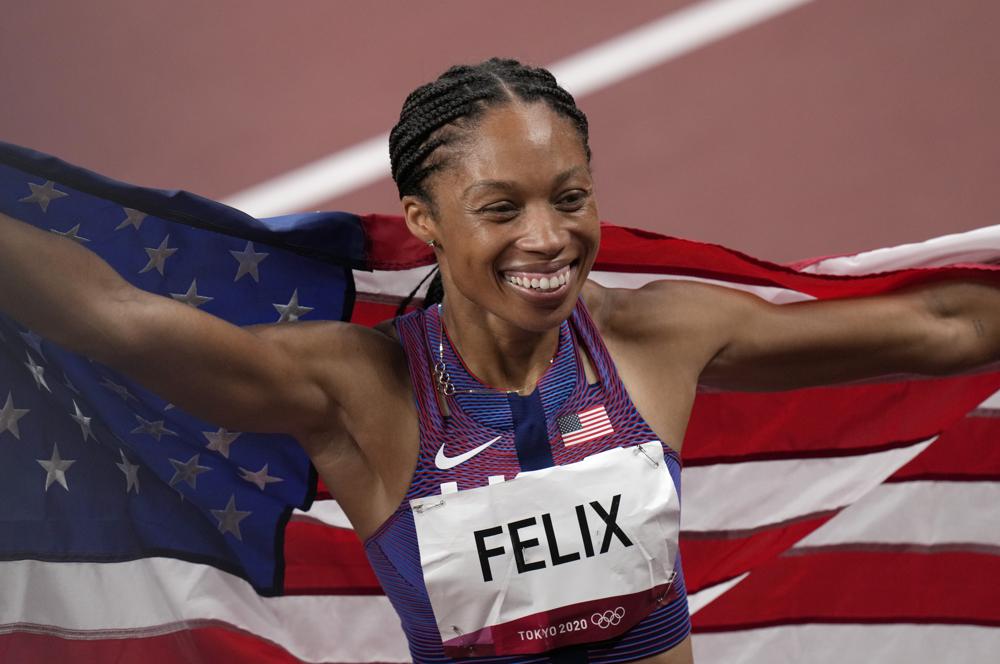 Not the gold medal in the women’s 400 meters. But a bronze that might wind up taking center stage in her trophy case. It is medal No. 10, the one that put her all alone at the top of the record book.

On a humid, sticky evening filled with anticipation, Felix — the sprinter, turned mom, turned advocate, turned realist — became the most decorated female track athlete in the history of the Olympics.

The 35-year-old was beaming as she strode through the bottom of the stadium — the new bronze medal standing out against her white, “USA” sweat suit. 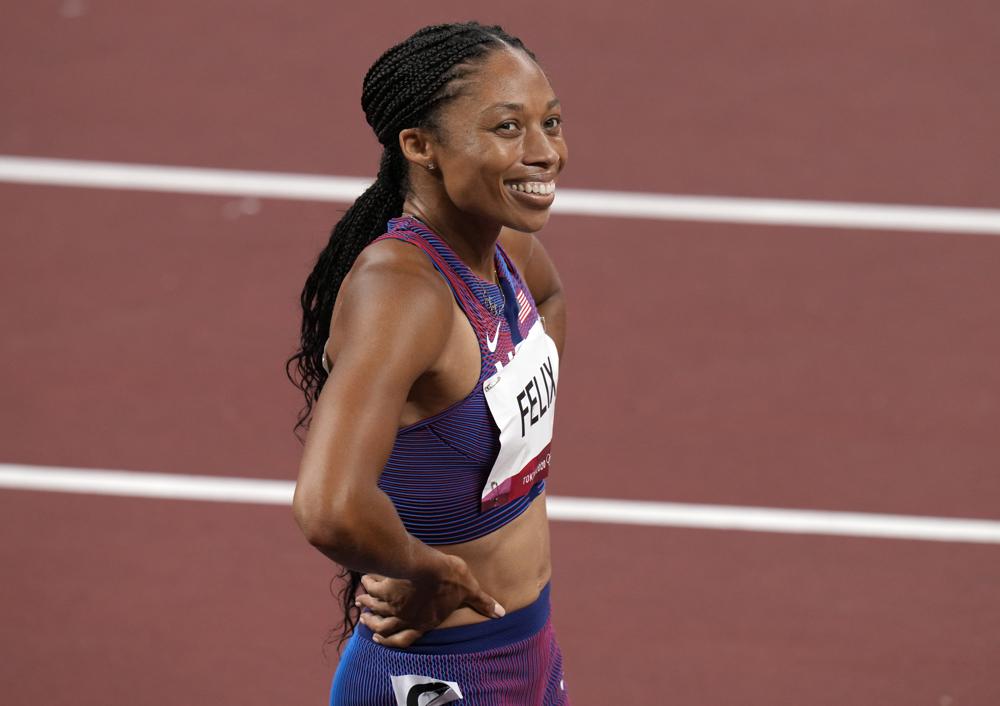 “A lot of times, I have tied my own work to what happens in these championships,” she said. “And I didn’t want to do that this time. I’ve been through too much. I always run for gold. But I just wanted to have joy no matter what happened tonight.”

Felix’s 10th Olympic medal broke a tie with Jamaican sprinter Merlene Ottey, and matches Carl Lewis, who was alone as the most decorated U.S. athlete in track. Felix could surpass Lewis on Saturday, when she is expected to be part of the U.S. 4×400 relay. Paavo Nurmi of Finland holds the all-time mark with 12 medals from 1920-28.

Felix started Friday’s race from the loneliest spot on the track: Lane 9, on the outside, with a phalanx of sprinters — each one younger, each one perhaps wondering if they could be the “Next Allyson Felix” — behind her where she could not see them. 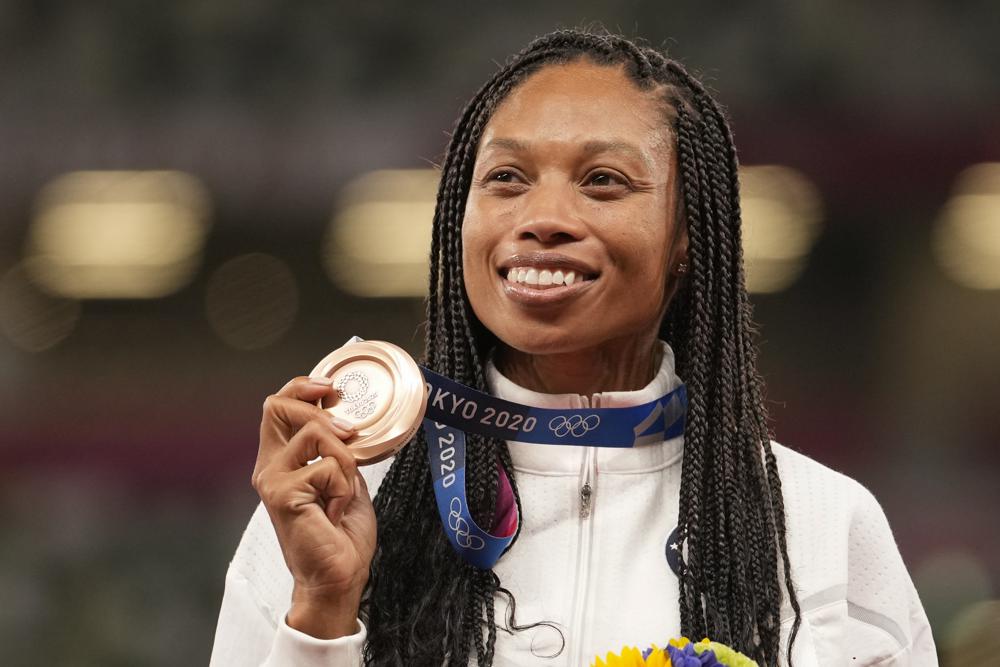 Felix hasn’t spent much time over her storied career, one that spans five Olympics and the better part of two decades, running from Lane 9. It’s where the underdogs line up.

“It’s hard,” she said. “You just kind of feel like you’re out there alone.”

But when she took off, she avoided the one thing that destroys runners out there. She avoided the urge to take off too fast, only natural when you have no idea where the other runners are.

She ran a near-perfect race, considering the circumstances. She did not win. Very few expected her to. She finished 1.1 seconds behind Shaune Miller-Uibo, the sprint star from the Bahamas who ripped a gold away from Felix five years ago, when she dove over the finish line in Rio.

That one hurt. The second-place finishes in Athens and Beijing hurt, too. Felix, who spent years as one of the most proudly private athletes in the game, is often remembered for crying in the recesses of Olympic stadiums after earning silver.

“I never want to be satisfied with losing,” she said in Beijing, after the second straight loss at the Olympics to Jamaica’s Veronica Campbell-Brown.

After a semifinal race this week that was a wire-to-wire struggle, she acknowledged she wasn’t as young as she used to be. What went unsaid was that the final might not end up as a fairy tale.

“Obviously, I didn’t want to be in that position, because this is something I hoped I could accomplish,” she said. “But it was just being able to separate the two. I feel I have come a long way from all the other Games. It sounds cliché, but, honestly, it’s bigger than just me running out there.”

The milestone for Felix comes nearly three years after she helped spearhead a conversation about the way women are treated in track, and sports in general. She severed ties with Nike, which wrote in pay reductions to women’s contracts if they became pregnant.

She raced Friday wearing a shoe she designed for a company she created. (She also wore Nike gear, because that’s the company that sponsors the U.S. team).

Felix has spoken candidly about the struggle to come back from a difficult pregnancy that led to an emergency C-section and put the lives of both her and her baby, Cammy, in jeopardy.

She’s spoken of the pressure she felt to return quickly, even when her body wasn’t responding the way it once did.

She also overcame one of her biggest hurdles — leaving her well-cultivated private image behind to become a spokesperson for something much bigger.

“I feel like it’s definitely been a journey for me to get to the point where I guess I had the courage to do so,” Felix said.

This week, she gave voice to the topic that’s been filtering through the Tokyo Olympics — how winning isn’t everything, and how the pressure to get to the podium can make the journey that much harder.

“When I line up for a race, I’m normally afraid,” she said in a heartfelt essay on social media, posted only hours before the race. “I’m not afraid of losing. I lose much more than I win. That’s life and I think that’s how it’s supposed to be.”

At the end of her race, Felix had nothing to be afraid of. Powering to the finish line, she edged Jamaica’s Stephanie Ann McPherson by .15 seconds for a bronze that might have been a disappointment in other years, but certainly wasn’t this time.

Felix said to get ready for the race Friday morning, she went back and looked at some videos of some of the struggles she and Cammy endured as they both faced their own sort of comeback.

“The really, really hard moments is what I tried to tap into,” she said. “There was a moment we weren’t sure if I was going to make it. And here I am, at the Olympics at 35 years old. So, you know, who could ask for more?”