Raven Saunders, Team USA’s shot putter, also known as the “The Hulk,” was pictured with her arms raised over her head in the form of an “X” while on the podium receiving her medal during the Tokyo Olympics Games.

When asked what the symbol meant, Saunders told the Associated Press it’s “the intersection of where all people who are oppressed meet.”

Saunders’s stunt looks to be the highest-profile protest thus far at the Games. The American athlete won the silver medal in the shot put under gold medalist Lijiao Gong from China. During the medal ceremony, she lifted her arms above her head during the anthem and pictures and formed an “X’ with her wrists.

Saunders, who is openly gay and has reportedly considered suicide in the past, wondered if she fits in the Olympics. The Olympian says the Games have struggled with diversity even though they try to celebrate it. After the silver medal finish, she said her mission is “To be me. To not apologize.”

“To show younger people that no matter how many boxes they try to fit you in, you can be you, and you can accept it. People tried to tell me not to do tattoos and piercings and all that. But look at me now, and I’m poppin’,” Saunders added.

Breitbart News reported that the International Olympic Committee (IOC) recently changed its rules on protests during the Games. The new guidelines from the games were to allow the Olympic athletes to  “express their views”  during interviews or press conferences and on social media.

However, the new guidelines were meant to “preserve the competition” on the “Field of Play” during ceremonies, medal ceremonies, or in the Olympic Village.

Last month, IOC Chief Thomas Bach spoke about the rule change to the Financial Times, “The podium and the medal ceremonies are not made . . . for a political or other demonstration. They are made to honor the athletes and the medal winners for sporting achievement and not for their private [views]. 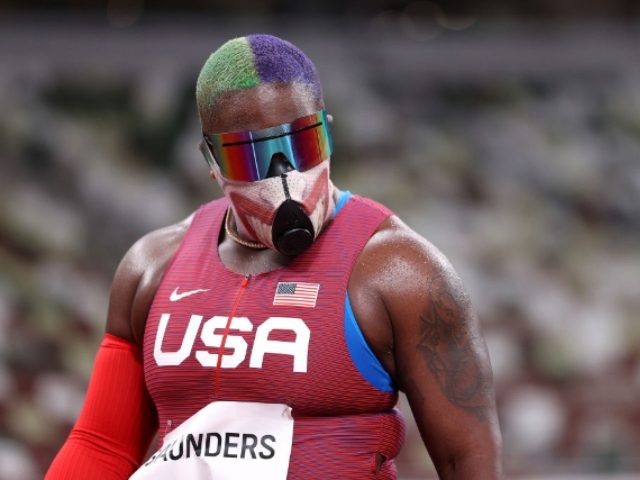 “The new guidelines are a result of our extensive consultation with the global athletes’ community,” the IOC AC Chair Kirsty Coventry said. “While the guidelines offer new opportunities for athletes to express themselves prior to the competition, they preserve the competitions on the Field of Play, the ceremonies, the victory ceremonies, and the Olympic Village.

“This was the wish of a big majority of athletes in our global consultation,” Coventry added.

Last week, Luciana Alvarado, a Team Costa Rican Olympic gymnast, kneeled at the end of her floor routine while tilting her head back and raising a fist from her right hand to pay respects to the Black Lives Matter movement.

Since it was the Olympian’s only floor performance, multiple news organizations reported that she would possibly not see any punishment for her political demonstration since it was technically part of the floor routine.