When the U.S. women’s soccer team takes on Canada for the Tokyo 2020 semifinals on Monday, they will play against the first transgender Olympian in history.

The 25-year-old Canadian midfielder known only as Quinn, formerly Rebecca Quinn, is biologically female but identifies as male. Quinn, who came out as transgender in September of 2020, dropped her “dead” former first name, the BBC reported.

In a woke Tokyo Olympics filled with many “firsts.” Quinn’s title as “first transgender Olympian in history” is joined by New Zealand weightlifter Laurel Hubbard, the first biological male Olympian to compete against biological women, and Alana Smith, the first openly nonbinary U.S competitor, who placed last in women’s street skateboarding Monday. Nonbinary refers to gender identity that is neither male nor female. 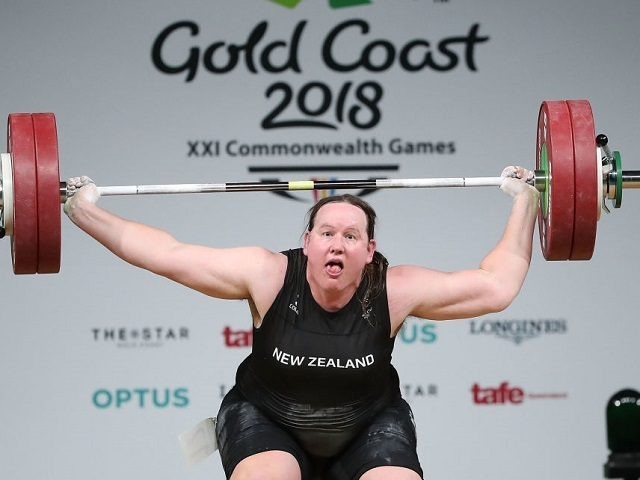 Laurel Hubbard of New Zealand competes in the Women’s +90kg Final during the Weightlifting on day five of the Gold Coast 2018 Commonwealth Games at Carrara Sports and Leisure Centre on April 9, 2018 on the Gold Coast, Australia. (Photo by Scott Barbour/Getty Images)

Quinn, who has been relatively quiet compared to many of her fellow woke athletes, posted on her Instagram page July 22 that she feels “sad knowing there were Olympians before me unable to live their truth because of the world.” Quinn said:

First openly trans Olympian to compete. I don’t know how to feel. I feel proud seeing ‘Quinn’ up on the lineup and on my accreditation. I feel sad knowing there were Olympians before me unable to live their truth because of the world. I feel optimistic for change. Change in legislature. Changes in rules, structures, and mindsets. Mostly, I feel aware of the realities. Trans girls being banned from sports. Trans women facing discrimination and bias while trying to pursue their olympic dreams. The fight isn’t close to over… and I’ll celebrate when we’re all here.

Olympic rules were changed for the 2004 Olympics to allow transgender athletes to compete against athletes of the opposite sex, with many specific rules attached, though this is the first Olympics to put the rules in practice.

The transgender rules have not been applied at this year’s Olympics without complications and complaints. According to Forbes, “Commentators misgendered Alana Smith as they competed in the skateboarding street event for Team USA, with NBC and BBC pundits using incorrect pronouns throughout the event. The media is not alone in using the incorrect pronouns for nonbinary athletes at the Games. While official Olympic biographics for both Quinn and Smith make use of their preferred they/them pronouns, they both have their gender incorrectly listed as female at the top of the page.”

@BBCSport please make sure the commentators at least TRY to use the correct pronouns for alana smith, they literally have their pronouns on the board. pic.twitter.com/WoMHc14Wl5