Jessica Vaugn, a former Playboy playmate, told Breitbart News that Playboy‘s use of a male on the cover of its October issue is illustrative of the magazine’s decline in relevance.

Vaugn said Playboy used to be a cultural leader and trendsetter, whereas now the digital magazine follows manufactured trends.

“I think that Playboy‘s influence is probably less than we need to be giving it, with the kind of attention it’s getting right now,” Vaugn said. “I think they’re following the trends. I think they’re looking around and seeing the signs and trying to regain their footing in a landscape and a world that’s changing so quickly. So I don’t think that they’re necessarily any kind of foundation that the culture is looking at and being influenced by.”

She continued, “I think that [Playboy is] just following the lead … so they ride the cultural tide. … The important work that Playboy did with classic femininity has already come and gone, and we’ve already fought that battle just like all the other battles that have been fought and won, and so, this is a completely different one, and they’re not a leader in the trends [or] forward-types of thinking. They’re just kind of riding coattails on that. It is sad to see its decline.”

🔶Check out my conversation with @joelpollak yesterday on @BreitbartNews radio discussing Playboy's controversial cover with a male wearing the iconic bunny suit. 🔶 Pictured is a photo of yours truly in the same costume! https://t.co/Mm2Mxatoan pic.twitter.com/IDNZ7582g0

Playboy‘s departure from focusing on the beauty of the feminine form in its cover models is part of a broader campaign to reconfigure human understanding of women and femininity, Vaugn observed. 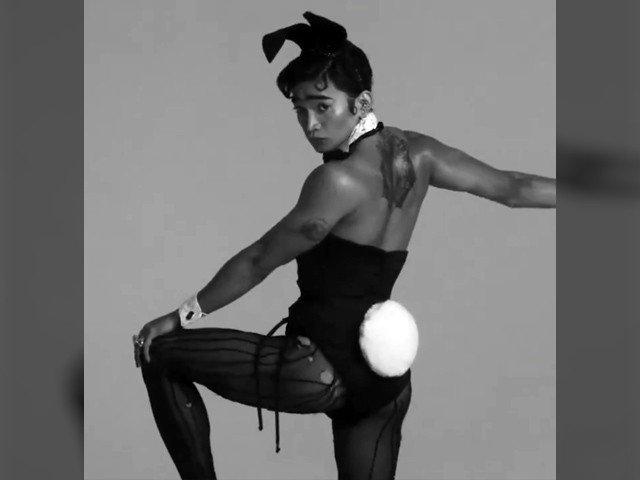 “We can’t even have normal conversations like, ‘Okay, Well if I’m not biologically a woman, I’m a woman if I think I am,’ and all these kinds of things that are just … really foggy territory because it’s just playing with language so much. How can we have any conversation about women’s rights when we can’t even all agree on what a woman is?”

Vaugn observed how Playboy‘s previous role as a broker between consumers and women monetizing their beauty had been disrupted by modern technology.

She said, “With the rise of OnlyFans, I think Playboy decided they couldn’t possibly contend. Why make content if now consumers can go direct to creators and every other girl on Instagram can just have an OnlyFans, and then consumers feel like they have a relationship with these girls. Why would you need some intermediary to distribute it? I think Playboy realized its gig here was up.”

Joel Pollak stated, “What’s also declined is this feminine ideal. … I can’t help but wonder if this push toward transgender models — and I don’t have a problem with people choosing to identify as transgender and so forth — but I just question whether Playboy, as a brand, identifying with transgenderism, and so forth. is continuing this undermining, let’s say, of female sexuality and the joy that adult Americans have had since forever in the pursuit of happiness with one another. We’re now … kind of locked in our homes. Are we de-sexualizing an entire generation of Americans by not catering to a traditional birds-and-bees, boy-meets-girl, a girl looks great on the cover of Playboy [ideal]?”

Vaugn replied,” I think there is some intentionality to that by culture as a whole.”