“Eighty percent of the kids educated in government schools in California are black and brown,” he remarked. “The lion’s share of them are Hispanics, and they are getting a lousy education and they know it. The worst teachers, worst principals, the worst bureaucrats.”

Newsom’s criminal justice policies are driving a rise in crime across the Gold State, Elder held. He noted how Democrats and the broader left regularly frame their policies towards crime in racial terms. “Rising crime will disproportionately hurt black and brown people, the very people the left claim to care about.”

“For all those reasons, Hispanic voters have had it,” he added. “The lion’s share of them — I think almost 70 percent — voted for Gavin Newsom just two years earlier. Now, the majority want him out.”

California’s failures in addressing many issues are “all because of [Newsom],” Elder assessed.

He said, “[Newsom] is a guy who lost $30 billion dollars through our Employment Development Department, money that should have been spent for unemployment benefits for Californians, because he shut down the state in the most draconian way, [more severe] than any other governor did. Instead, the money went to criminals inside the country [and] outside the country.”

He went on, “[Newsom] has mismanaged the forests. We’re having a water shortage. Crime is going up. Homelessness is going up. The cost of living [is] out of sight, which is why, for the very first time in California history, there’s a net migration of people out of California, and it’s not just millionaires and billionaires who are leaving. It’s also businesses.” 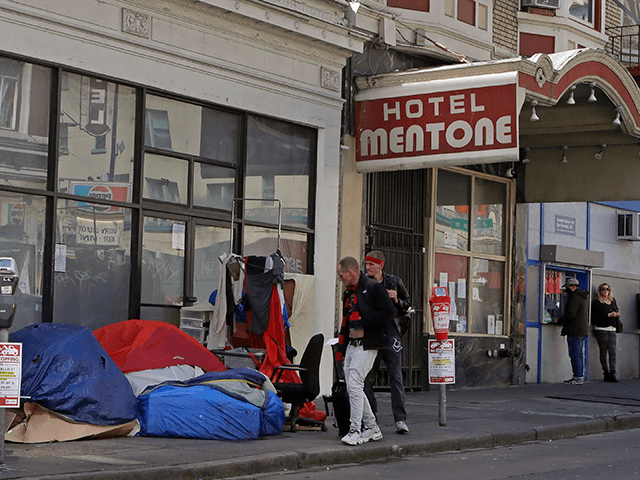 Pedestrians walk to the edge of the sidewalk to avoid stepping on people in tents and sleeping bags on Monday, April 13, 2020, in the tenderloin area of San Francisco. (AP Photo/Ben Margot)

“[Gavin Newsom] cracked down on churches,” Elder recalled of Newsom’s statewide lockdowns, ostensibly issues to reduce coronavirus transmission. “He left marijuana shops open. He left open the big box stores while mom and pops were shut down. One-third of all small businesses [were] destroyed, ended forever.”

Elder concluded, “One of the many things I’m going to do when I become governor is, to the extent that there are still mandates for vaccines and for face masks for state workers, they’re going to be repealed.”