Jason Miller, CEO of GETTR and former spokesperson and adviser for former President Donald Trump, told Sirius XM’s Breitbart News Sunday that Rep. Adam Kinzinger (R-IL) tried to get his wife a job at the White House during the Trump administration before becoming a left-wing critic of the 45th president.

“Kinzinger wanted to get his wife hired in the comms department, the press shop, at the White House, and he was a big-time Trump supporter,” Miller revealed to host Joel Pollak. “After his wife did not get picked for that job, then he became a little bit more antagonistic.”

Miller continued, “The big problem with Kinzinger [is that] I think he just started to buy his own BS in Washington, DC, and so now, he is much more worried with who he’s going to hang out with in Kalorama or Eastern Market and less concerned with Rockford.”

He concluded, “I know that 100 percent for a fact. … I’ve even seen the text messages where [Kinzinger] was trying to get his wife hired in the White House. I’m not sure why the folks [from the Trump administration] haven’t been a little more direct with that, but it’s absolutely the case. He wanted to get his wife a job, and then when she didn’t, he started becoming a little more hostile.”

Biden “couldn’t even manage a retreat,” Pollak remarked after recalling that former officials from the intelligence, military, and national security apparatus were hyped by news media for their political opposition to Trump: 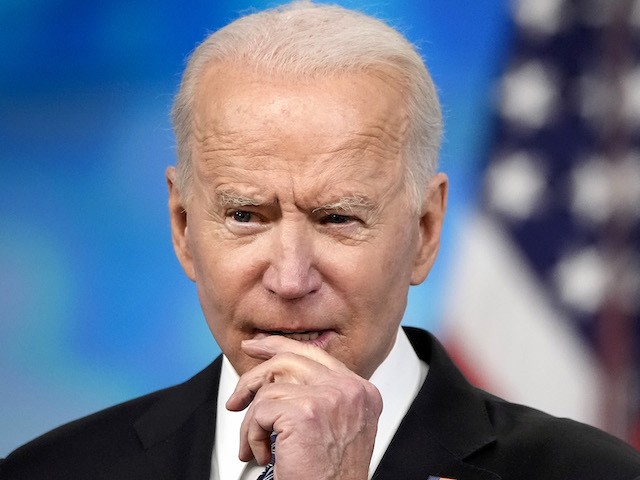 U.S. President Joe Biden delivers remarks on the COVID-19 response and the ongoing vaccination program at the Eisenhower Executive Office Building on May 12, 2021 in Washington, DC. Biden spoke on the approval of the Pfizer vaccine for children 12 and over and the country wide efforts to increase vaccination rates (Photo by Drew Angerer/Getty Images).

“There are so many — in fact, hundreds of — military experts, national security officials, former intelligence officials who all vouched for Joe Biden’s competence and what a great commander-in-chief he was going to be, and they signed these letters,” he stated. Some of them signed letters saying they would never work for Trump, [alleging] that Trump was a disaster.”