Ian Prior, executive director of Fight for Schools, on Thursday said Loudoun County, VA, is a focal point of grassroots resistance against “critical race theory” and “transgender policies” in schools.

He remarked, “You’re going to see what the wokest school board in America is doing, so you’ll understand what to look for when your school board starts doing the same thing.” 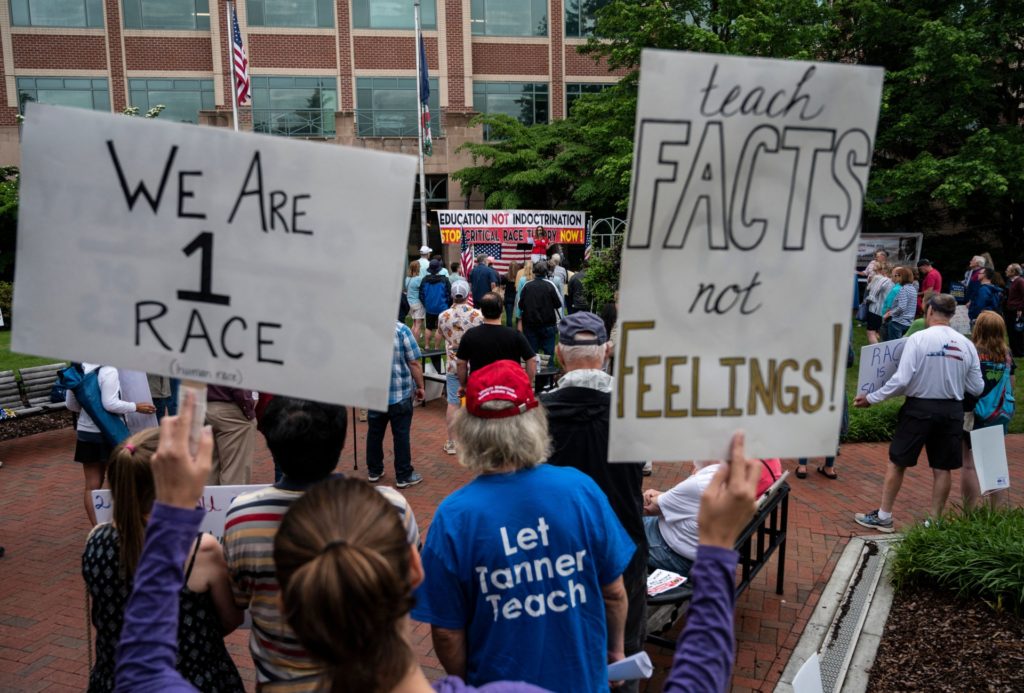 People hold up signs during a rally against “critical race theory” (CRT) being taught in schools at the Loudoun County Government center in Leesburg, Virginia on June 12, 2021.  (ANDREW CABALLERO-REYNOLDS/AFP via Getty Images)

Prior noted Loudoun County School Board (LCSB) is implementing critical race theory both in its employee administration and shaping of curriculum for students. National news media attention given to educational goings on in Loudon County is a function of its proximity to Washington, DC, he explained.

The LCSB denies the imposition of critical race theory in both its education and personnel policies, Prior added. “They say we’re engaged in dog whistle politics and this is all to win elections,” he said.

The LCSB is also imposing “transgender” policies, Prior added. The policy states boys can use girls’ restrooms. It reads, “Students shall be allowed to use the facility that corresponds to their consistently asserted gender identity.”

Prior said, “The transgender policy [was] just passed last night. Basically, whatever gender you identify, you can use the corresponding bathroom. Teachers and students have to use the preferred pronoun of transgender students. There are no more father-daughter dances. There’ are no more homecoming king and queen. I mean, you name it.”

Prior highlighted the LCSB’s “transgender” policy’s impact on girls’ sports. “Biological boys can now play in girls’  sports,” he stated. He added, “It is a security issue [and] safety issue.”

The LCSB voted 7-2 on Wednesday to approve what it named, “Policy 8040: Rights of Transgender and Gender-Expansive Students.” It described the policy as related to “transgender,” nonbinary,” and “gender-expansive students.”

Policy 8040 affirms LCPS’ commitment to providing an equitable, safe and inclusive learning environment for all students regardless of their sex, sexual orientation, transgender status, gender identity or gender expression. … Some other policies may need to be developed or expanded to be more gender-inclusive or to emphasize specific protections for transgender, nonbinary, and gender-expansive students.

The LCSB’s imposition of its “transgender policy” stands in opposition to the popular will of parents, Prior shared.