A New Jersey man saved a stranded motorist who had been caught in a flash flood Wednesday while waters rose rapidly.

When Derek Alfano saw a man named Junior stranded on Millburn Avenue in Millburn, New Jersey, amidst the remnants of Hurricane Ida, he acted quickly. “I just said to God, ‘Give me the strength. I have to help this guy,'” Alfano said. “I couldn’t leave him. God forbid if something ever happened to him, I couldn’t live with myself.”

Alfano evacuated his own vehicle after water rose up from his feet and flooded his car. “My car started to fill up with water,” he explained. “I started to feel it on my feet and up to my knees, and I knew I had to evacuate my car.”

Alfano ditched his vehicle in feet of water in the middle of the road and made his way to a building across the street. “I was lucky enough to get stalled right here where there were people still in this medical building,” Alfano said.

While in the building, which was filling with water, he noticed another man that was trapped in his vehicle which floated on top of Alfano’s submerged car. “I just heard yelling, and we went to the front of the building and the building was flooding already,” the hero recounted.  “This man was saying, ‘I can’t swim. Help, help, I can’t swim.’”

As the man’s car doors and windows would not open, Alfano communicated with him through the sunroof:

In a video of the ordeal, Derek is heard telling Junior, “excuse me, sir! I’m going to come out and help you!” He instructed the man, “get out of your car and go to the front of your hood.” 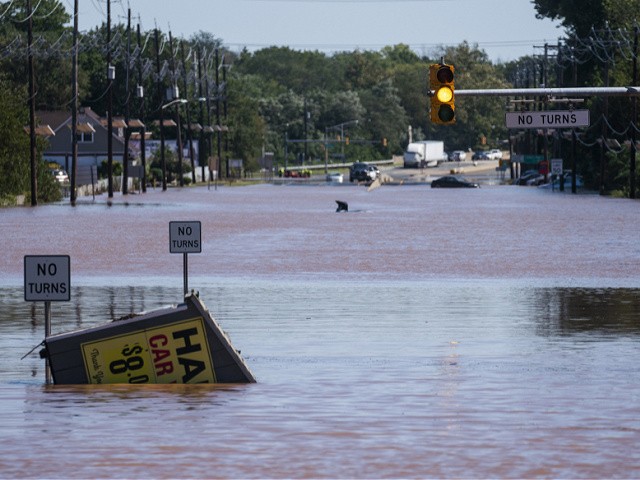 General view of the 206 route partially flooded as a result of the remnants of Hurricane Ida in Somerville, N.J., Thursday, Sept. 2, 2021. (AP Photo/Eduardo Munoz Alvarez)

In an act of heroism, Alfano waded out into the water that was chest high in order to grab the hand of Junior and lead him to safety in the medical building.