Travelers hitting the road for Thanksgiving this week will notice two things on their journey: they’ll have more company and gas prices in many states remain on the rise.

UPI reports the auto group projects some 53.4 million people will travel for the holiday in coming days. That’s an increase of 6.4 million, or 13 percent over last year when coronavirus forced many to bypass the annual family event.

The American Automobile Association (AAA) said about 48.3 million people will drive somewhere for Thanksgiving and 4.2 million will fly.

Those not in the sky and on the ground however will find rising prices at the pump as they have been all year, remaining stubbornly at a seven-year high.

The Biden gas crisis continues. "Motorists are paying, on average, 37 percent more to fill up than the start of the year," a AAA spokesperson said. https://t.co/dBTWSxiN0x

In Florida, gas prices on Thanksgiving are predicted to be the highest in eight years.

“High gas prices are not something drivers will be thankful for this Thanksgiving,” said Mark Jenkins, spokesman for the AAA-The Auto Club Group. 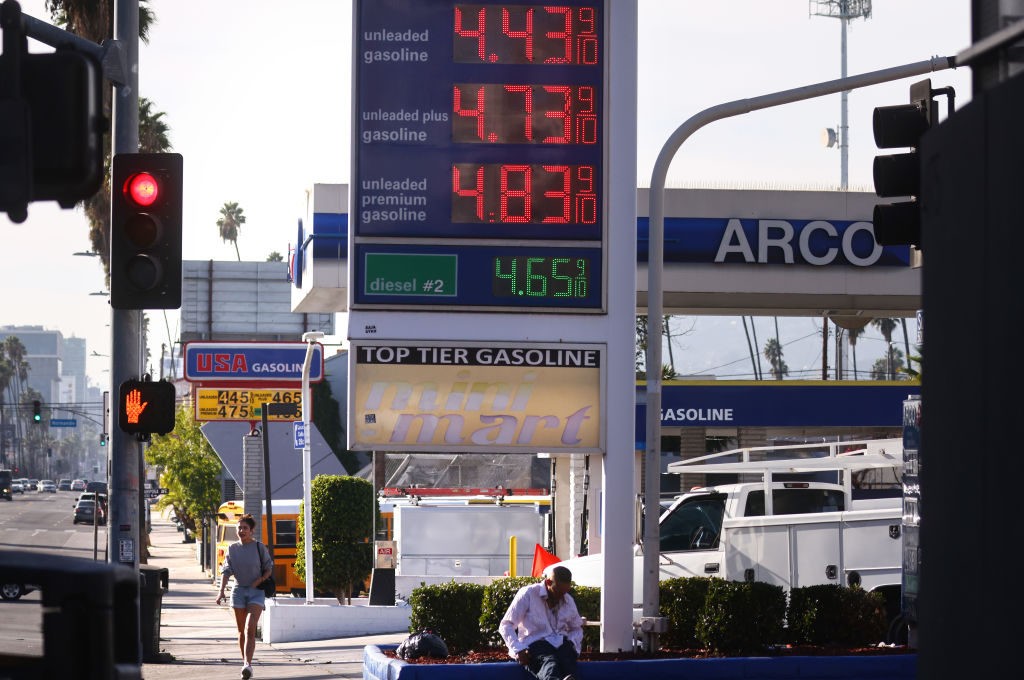 Gasoline prices are displayed at a gas station on November 15, 2021 in Los Angeles, California. According to AAA, the average price statewide for one gallon of regular unleaded gas hit $4.68 today, an all-time record high. (Mario Tama/Getty Images)

President Joe Biden last week warned against illegal conduct from gas companies who may be charging more at at the pump than necessary, calling on the Federal Trade Commission (FTC) to investigate the price surge across the United States.

He spoke as California reported the highest average price for a gallon of regular gasoline at $4.682, breaking the record high of $4.671 from October 2012.

In a letter addressed to FTC Chairwoman Lina Khan, Biden warned, “The bottom line is this: Gasoline prices at the pump remain high, even though oil and gas companies’ costs are declining.”

Biden will propose a 20-year drilling ban for oil and gas in the areas in and surrounding Chaco Canyon in New Mexico, according to reports, despite soaring energy prices in the United States. https://t.co/hGQxcfFjHQ

Frank Macchiarola, the group’s senior vice president of policy, economics and regulatory affairs, called Biden’s push for a probe “a distraction” from the ongoing market shift and said “ill-advised government decisions” are exacerbating the situation.

“Rather than launching investigations on markets that are regulated and closely monitored on a daily basis or pleading with OPEC to increase supply,” he said, “we should be encouraging the safe and responsible development of American-made oil and natural gas.”

All of which affirms for Biden, market forces of supply and demand simply do not heed administrative fiat.