In a tweet Thursday, Briskman shared a response to FFS’s petition from an apparently left-wing organization, Loudoun 4 All, saying, “TY @loudoun4all for a factual & thorough debunking of the alt-right FFS petitions. If they want to fight for schools they should support teacher pay increases, more mental health resources and ending the school to prison pipeline.”

TY ⁦@loudoun4all⁩ for a factual & thorough debunking of the alt-right FFS petitions.

If they want to fight for schools they should support teacher pay increases, more mental health resources and ending the school to prison pipeline. https://t.co/UKj9IfBmHM

According to the Loudoun 4 All article, attempts to recall school board members who support Critical Race Theory and gender theory are “part of a country-wide effort to use recalls to subvert the results of free and fair elections.” Continuing along those lines, the left-wing group claimed that “When recalls don’t work, threats of violence and instilling fear are used instead,” though they did not offer evidence of such violence.

“Recalls are intended to be used in cases of serious malfeasance,” the group concludes. “Instead, they are being used to circumvent elections, since the January 6th insurrection failed to subvert the Democratic Process.”

FFS Executive Director Ian Prior responded to Briskman’s tweet, telling the supervisor to “lawyer up.”

As Merriam-Webster Dictionary defines “alt-right” as “a right-wing, primarily online political movement or grouping based in the U.S. whose members reject mainstream conservative politics and espouse extremist beliefs and policies typically centered on ideas of white nationalism,” many non-white parents standing up to the school board have responded with outrage over Briskman’s comments.

“I think it’s absurd. It’s an ad hominem,” Joe Mobley, a black father of four, told Fox News. Mobley added that Briskman’s comments are an attempt to cover up the school board’s belief that “parents shouldn’t have a say in what goes on in the classroom because your kids belong to the state.”

“Obviously, as a black dude it’s weird to be called a white nationalist,” he concluded, noting that Briskman gained political prominence by flipping off former President Donald Trump’s motorcade. 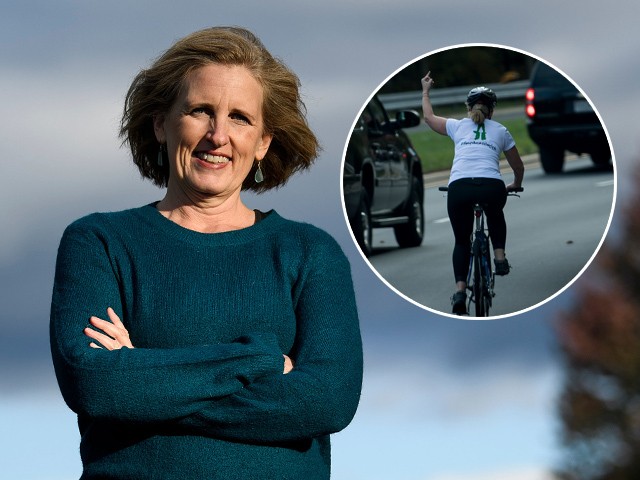 Juli Briskman, who was fired after giving US President Donald Trump’s motorcade the middle finger while cycling and is running for a seat on the Loudoun County Board of Supervisors, poses October 17, 2019, in Sterling, Virginia. (BRENDAN SMIALOWSKI/AFP via Getty Images).

Elicia Brand, a Jewish mother who has volunteered with FFS “for months” told Fox News she is “completely offended” and that she takes Briskman’s comments as a “personal affront.”

Prior also commented on Briskman, saying, “Ms. Briskman’s false and defamatory statement is an attack on a diverse coalition of thousands of Loudoun County residents that are utilizing a legal process to remove school board members that have violated the law and their own code of conduct.”

“The best thing Ms. Briskman could do, as an elected official, is publicly retract her statement and cease and desist from regularly attacking her constituents on social media,” he concluded, adding, “But we aren’t holding our breath.”

Virginia’s rules governing the removal of elected officials require that a petition to recall receive enough signatures to equal ten percent of the number of votes cast in the most recent election for that office. Prior announced last week that his organization had obtained enough signatures to recall four members of the school board.