Treasury Secretary Janet Yellen warned that Biden’s $1.2 trillion infrastructure bill could cause the United States to hit its debt limit on December 15.

“While I have a high degree of confidence that Treasury will be able to finance the U.S. government through December 15 and complete the Highway Trust Fund investment,” Yellen said in a letter to Congress on Tuesday. “There are scenarios in which Treasury would be left with insufficient remaining resources to continue to finance the operations of the U.S. government beyond this date.”

Yellen’s December 15 deadline is 12 days after her initial December 3 prediction for the debt limit. “In my October 18 letter to you, I noted that the recent $480 billion increase in the debt limit provided a high degree of confidence that Treasury would be able to finance the U.S. government through December 3, 2021.” 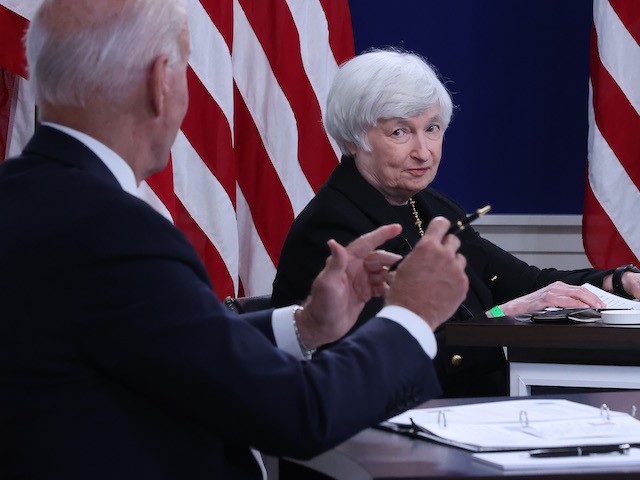 Treasury Secretary Janet Yellen (C) listens to President Joe Biden during a hybrid meeting with corporate chief executives and members of his cabinet to discuss the looming federal debt limit in the South Court Auditorium in the Eisenhower Executive Office Building on October 06, 2021, in Washington, DC. (Chip Somodevilla/Getty Images)

Some Senate Republicans sided with Senate Democrats in October to proceed with a $480 billion short-term boost to the debt limit. The U.S. government will default on its obligations if the debt limit is reached. Yellen’s change in date is influenced by payment obligations the United States has under Biden’s recently passed infrastructure bill.

“Yesterday, the President signed the Infrastructure Investment and Jobs Act, which appropriates $118 billion for the Highway Trust Fund,” she wrote. “Under 26 U.S.C. $ 9601, these funds must be transferred into the Highway Trust Fund within one month after the enactment of the legislation, and the transfer will be completed on December 15.”

“Promptly thereafter, the funds will be invested in nonmarketable Treasury securities subject to the debt limit.”

Yellen ensured Congress would be kept up to date on any new information due to the “unavoidable variability” of the federal government’s cash flow.

Along with Federal Reserve Chair Jerome Powell and other economists, Yellen warns that a default could damage U.S. credibility, increase borrowing costs, and lead to a recession.