Ben & Jerry’s branded the Kyle Rittenhouse trial another display of the “racist” American justice system, postulating that the trial would be far different if it involved a black teen. This comment comes despite the ice cream company’s demand in 2019 that the criminal justice system view all as “innocent until proven guilty.”

“The #RittenhouseTrial displays yet again that our ‘justice’ system is racist,” the Vermont-based company posted Thursday evening on its official Twitter page.

“How would this trial be going if he was a Black 17 yr old that crossed state lines illegally carrying an AR-15 and shot 3 white protesters?” the post continues.

“We need real justice in the legal system,” the company added. “This isn’t it.”

The #RittenhouseTrial displays yet again that our “justice” system is racist.⁰⁰How would this trial be going if he was a Black 17 yr old that crossed state lines illegally carrying an AR-15 and shot 3 white protesters?⁰⁰We need real justice in the legal system. This isn’t it.

Rittenhouse, who was 17 at the time of his actions, is on trial for murder and related charges after shooting and killing two people and wounding another as he was chased through the streets during Black Lives Matter riots in Kenosha, Wisconsin, last August.

Rittenhouse’s lawyers say that he acted in self-defense.

In a shocking display of hypocrisy, the company’s founders had actually demanded that “innocent until proven guilty” be granted to all in a 2019 statement explaining the inspiration behind the launch of its “Justice ReMix’d” flavor to advocate for prison reform. 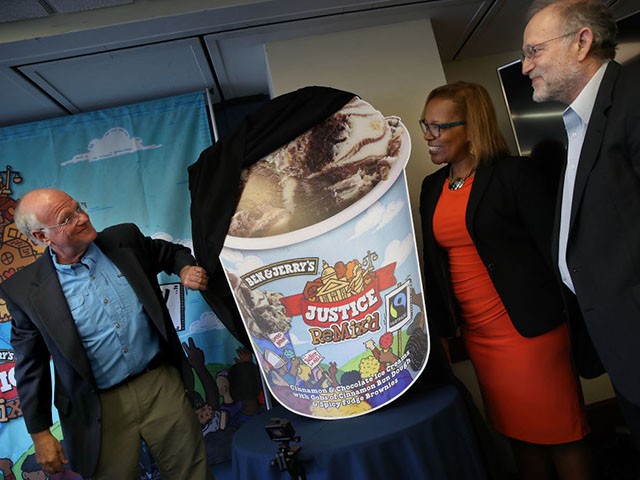 Rittenhouse did not seem to meet Ben & Jerry’s qualification for that right.

In response to the post, many attacked the “woke” company’s “misinformation.”

“Progressivism is a mental disorder,” wrote one Twitter user.

“Obviously three white people getting shot by a white kid is evidence of the racism in our society,” the user quipped.

“There wouldn’t be a trial if that was the case…stick to makin that trash ass ice cream,” wrote another.

“[Your] political takes are almost as bad as your ice cream!” another Twitter user wrote.

“Braindead PR tweet. The trial is going this way because the videos demonstrate clear self-defense and the prosecutors are ineffective. The only difference if Rittenhouse was black is that the opposite ideologues would support him,” wrote another.

“Stop race-baiting, stick to the dairy business,” the user added.

Ben & Jerry’s is no stranger to controversy, having expressed support for “woke” causes on many occasions.

In July, Ben & Jerry’s faced a wave of backlash after announcing plans to boycott Jewish settlements in the West Bank and East Jerusalem, or what it termed “Occupied Palestinian Territory,” with many calling out the Vermont-based company’s hypocrisy and double standards.

In April, the ice cream company called to defund police, characterizing the police-involved shooting of Daunte Wright as being intrinsically linked to “white supremacy”:

The murder of #DaunteWright is rooted in white supremacy and results from the intentional criminalization of Black and Brown communities.

This system can’t be reformed.

It must be dismantled and a real system of public safety rebuilt from the ground up.#DefundThePolice

Last year, the famed company named a flavor after former NFL player and national anthem protester Colin Kaepernick, and in February, erected a billboard in the Super Bowl host city of Tampa Bay depicting him with a raised fist, next to his “Change the Whirled” flavor and signature “I Know My Rights” sign from his “Know Your Rights Camp.”