Pro-migration lobbies are hurling claims of murder, rape, torture, and racism at President Joe Biden’s deputies after the officials suggested they may return some economic migrants to Mexico until they are approved for asylum.

The administration’s pro-migration officials say they may be forced by a judge to restart the Migrant Protection Protocols (MPP) program in November. The program, also called Remain in Mexico, requires migrants to wait in Mexico until their scheduled date in asylum court.

“There is no humane way to implement a program that was intended by Stephen Miller as a way to torture asylum seekers,” tweeted Alida Garcia, a top manager at Mark Zuckerberg’s FWD.us lobbying group for investors.

“There were over 1,500 documented cases of assault, rape, torture, kidnapping, and murder done to people [migrants waiting in Mexico],” tweeted Aaron Reichlin-Melnick, an advocate for the American Immigration Council. The group is a spin-off of the American Immigration Lawyers Association. “[It] was an unlawful sham designed to generate denials of nearly all asylum claims while using hideous violence meted out by cartels as a primary deterrent to vulnerable asylum-seekers.” 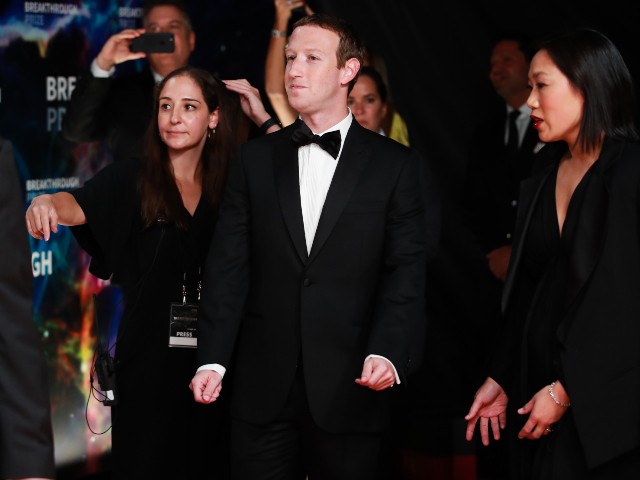 “Restarting this ‘program,’ in any form, is the darkest of nightmares,” tweeted Adam Isacson, a manager at the Washington Office on Latin America.

The program is reluctantly being revived because of an August decision by a federal judge in Texas.

The judge directed Biden’s officials to comply with the nation’s immigration laws. The laws require migrants who ask for asylum to be detained until a judge accepts or rejects their claim. White House officials stopped enforcing that law in 2009, allowing perhaps four million wage-cutting migrants to flood into blue-collar jobs, housing, and schools.

The Remain in Mexico program would work as a form of detention because it keeps the asylum seekers in Mexico — and out of U.S. jobs — until a U.S. immigration judge approves their asylum request.

Under Donald Trump, the Remain in Mexico program almost zeroed out migration because it prevented migrants from getting the U.S. jobs they needed to repay their smuggling debts to the cartel-affiliated coyotes. Trump’s drop in migrants raised wages for Americans and reduced the murders and deaths of migrants who were working with the progressives to get into the United States. 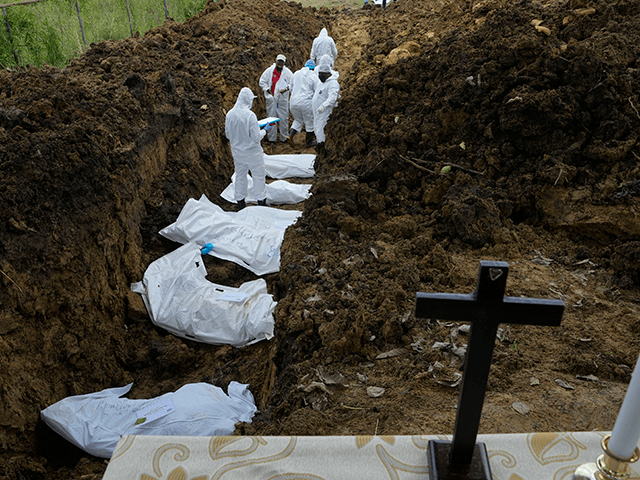 A forensics team bury a group of 15 migrants who died trying to cross the Darien Gap, at the Guayabillo cemetery in Agua Fria, Panama, September 30, 2021. (AP Photo/Arnulfo Franco)

Any cut-off in migration is hated by progressives who gain income and status by delivering the migrants to employers, and eventually, to Democratic political candidates. Moreover, unless the Biden decision is eventually overturned by legal appeals or Congress, the Democratic Party will end up using a migration-control program developed by the men whom many progressives hate — former-President Trump and his deputy, Stephen Miller.

The administration’s deference to the judge was unveiled on October 13 by Rep. Henry Cuellar (D-TX). In response, Douglas Rivlin at America’s Voice tweeted:

I suspect that @RepCuellar – like his ally @StephenMiller – hopes that those seeking safety in the US will give up and/or die having been expelled by US to (theoretically) pursue their US court cases for asylum.#WelcomeWithDignity

Rivlin’s group — and many other pro-migration groups — has received much money from Zuckerberg, either via his Chan-Zuckerberg charity or the investors’ FWD.us lobbying group.

“It’s not hyperbolic to say that MPP is the US gov’s facilitation of kidnapping, rape, & sham courts,” Garcia said in another tweet. “It is objectively bad to have kidnapping be a policy preference,” said Garcia, who is back at FWD.us after working in the Biden administration for several months trying to build support for amnesty and more migration.

On October 16, the pro-migration groups staged a symbolic walkout from a video conference with White House officials. Buzzfeed reported:

“There is no improved version of [Remain in Mexico]. It is not possible to make the inhumane, humane, the unfair, fair, or to breathe life into a deadly program,” said the immigrant advocacy groups in a prepared statement they took turns reading. “We refuse to be complicit in deterrence-based border policies … We cannot allow our efforts to help the victims of these policies to be used in any way to prolong them.”

Governor Abbott claims he's going to "eliminate rape" but thanks to his decision to sue to force Biden to reinstate MPP, migrant women WILL be kidnapped by the cartels and they WILL be the victims of sexual violence and he WILL bear responsibility.

The advocacy groups and their media allies are also using Biden’s forced crackdown on Haitian migrants to make charges of racism against Biden’s progressive deputies. For example, Vox posted October 13:

“The administration’s hands were not tied,” said Karen Musalo, founding director of the Center for Gender & Refugee Studies and the Refugee and Human Rights Clinic at UC Hastings College of the Law. “The administration was not forced to treat Haitians in this way. This is an affirmative decision that the administration is making, which is unlawful, it’s racist, it’s deplorable.”

We stand shoulder to shoulder with Haitian and Black immigrant-led organizations and echo their calls for the Biden administration to stop partaking in systemic anti-Black racism within the U.S. asylum and refugee systems, end the deportation of Haitian immigrants, and stop using Title 42 in its entirety.

The invective also comes as business groups and their progressive allies are trying to revive unpopular amnesty plans that are now stalled in the Senate. For example, donor-funded groups have staged small protest marches in D.C., and one group protested outside Vice President Kamala Harris’s home. 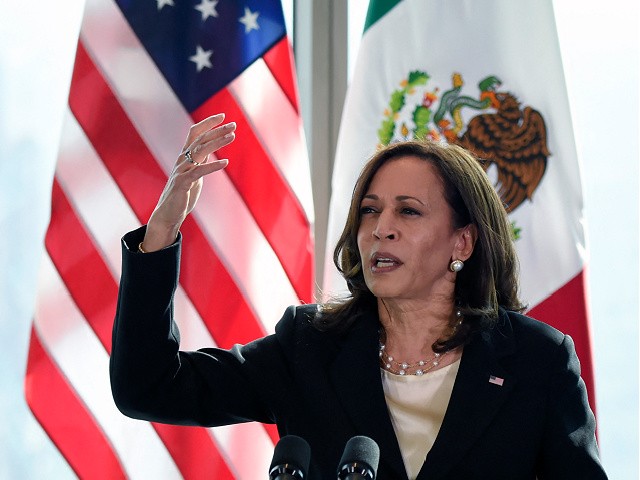 The hostile language echoes the activists’ two-track media strategy during President Barack Obama’s tenure. Back then, activists loudly declared that Obama was the “deporter-in-chief,” even though Obama was allowing millions of migrants easy access into the United States. But the activists’ staged opposition helped their media allies portray Obama as a moderate during the establishment’s “Gang of Eight” amnesty push in 2013 and 2014. That push cost the Democrats five Senate seats in 2014.

The critics are loath to admit Biden’s pro-migration policies.

For example, Biden announced he would import roughly 100,000 Afghan migrants this year, and another 125,000 refugees in 2022. His deputies also provided work permits to roughly 200,000 Venezuelans and allowed approximately 1 million migrants to cross the Mexican border in 2021. The deputies are also promising to import more migrants in 2022 while minimizing enforcement of the nation’s deportation rules. 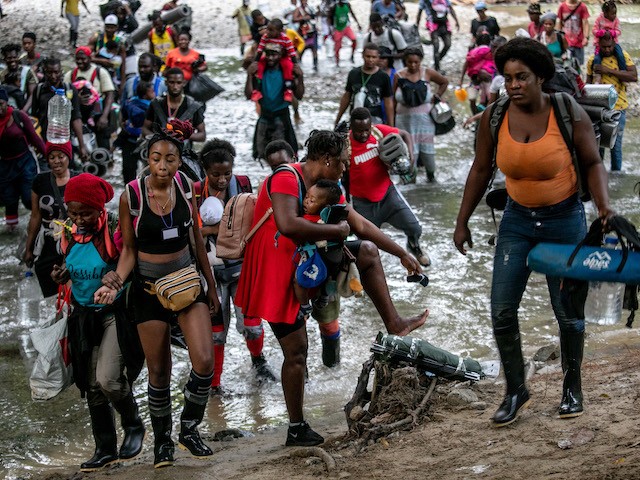 A mother pauses to put back on dry socks and shoes after crossing a river in the Darien Gap en route to the United States on October 07, 2021, near Acandi, Colombia. (John Moore/Getty Images)

The 2021 polls also show Biden is paying a huge price for his reckless acceptance of the amnesty advocates’ pro-migration policies.

Only 11 percent of Americans strongly support President Biden’s easy-migration, pro-amnesty immigration policies, according to a Morning Consult poll. The poll also shows 44 percent strong opposition to Biden’s policies, even as his deputies push hard to expand the inflow of visa workers and chain migration migrants in the pending $3.5 trillion reconciliation bill.

The “strong” responses are more important than the “somewhat” reactions because they are far more likely to influence voting in 2022. Overall, the October 2-4 poll of 1,998 registered voters showed 33 percent support and 59 percent opposition to Biden’s policy of forcing Americans to compete with legal and illegal migrants for jobs and housing. 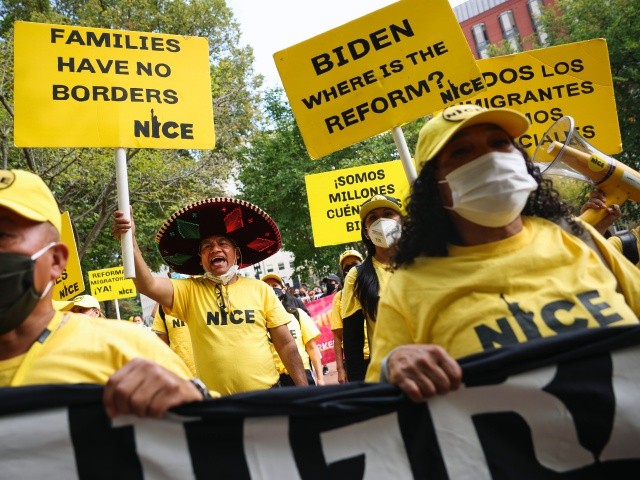 Why are fentanyl-related deaths on the rise? @SRuhle explains: pic.twitter.com/et20c4jdKz