President Joe Biden’s Department of Homeland Security (DHS) is considering a plan that would allow immigrants who fraudulently secured naturalized American citizenship to keep their citizenship, a new report states.

The Washington Times‘s Stephen Dinan reports that DHS Secretary Alejandro Mayorkas is floating a memo to the United States Customs and Border Protection (CBP), the Immigration and Customs Enforcement (ICE), and the U.S. Citizenship and Immigration Services (USCIS) that would help immigrants keep their naturalized citizenship in cases where they are found to have committed fraud. 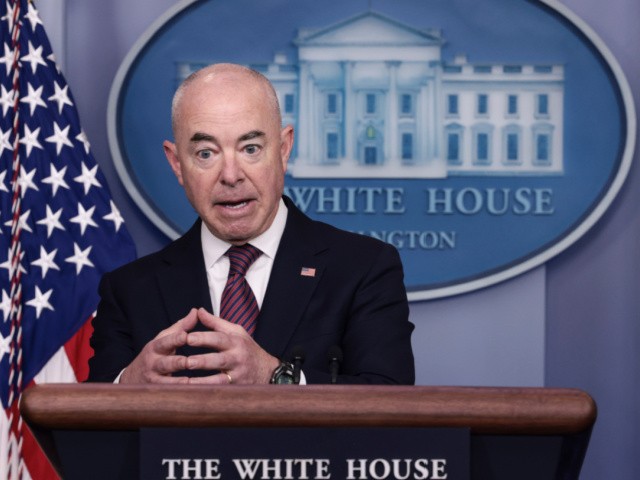 U.S. Homeland Security Secretary Alejandro Mayorkas gestures as he speaks at a press briefing at the White House on September 24, 2021 in Washington, DC. (Photo by Anna Moneymaker/Getty Images)

“Naturalized citizens deserve finality and security in their rights as citizens,” the memo says. “Department policies should not cause a chilling effect or barriers for lawful permanent residents seeking to naturalize.” [Emphasis added]

The memo says the department should limit its denaturalization cases to instances of national security threats, major felons such as sex crime convicts or human rights violators, or cases of fraud “with aggravating factors.” [Emphasis added]

The memo doesn’t ban denaturalization but imposes a list of criteria to weed out cases, including whether bogus citizens had attorneys at the time, whether they have family that relies on them or whether they have “medical issues.” [Emphasis added]

Robert Law, with the Center for Immigration Studies, writes that the DHS memo would impose “such onerous restrictions that it has the practical effect of ending civil denaturalization.”

“Apparently following the rules to naturalize is too much of a ‘barrier’ in the eyes of the Biden political team,” Law writes. “Immigration cheats … are surely cheering on Secretary Mayorkas to sign the memo.”