Republican efforts to flip the House next year look set to be built on solid financial ground with news Thursday its main fundraising committee hauled in more than $105 million this year through September.

The record GOP take for the nine-month period marks a 74 percent increase over the last cycle and includes $25.8 million raised in the third quarter of the year, AP reports. The group now has $65 million cash on hand, three times the measure it saw at this point four years ago.

“House Democrats are sprinting toward the exits because they know their days in the majority are numbered and we look forward to keeping up the pressure,” National Republican Congressional Committee (NRCC) chairman Rep. Tom Emmer (R-MN), said in a statement as seen by AP.

Democrats have narrow majorities in both the U.S. Senate and the House of Representatives, fully aware the president’s party almost always loses seats in midterm elections.

Woke corporations are part of the problem. So Republican leaders raked in millions from their grassroots campaigns in the first fundraising quarter of 2021, leaving corporations behind. https://t.co/A9BuRJuZ5e

Raising more money is no guarantee of electoral triumph, but ample funds help parties support their candidates’ campaigns while paying for advertising and polling.

AP outlines the Democrats’ own congressional fundraising arm is yet to reveal its total through September. But last month, the group announced it had raised $10 million in August — besting the Republican House campaign committee’s $6.5 million, as Breitbart News reported.

The NRCC outraised the Democratic House committee $45.4 million to $36.5 million through the year’s second quarter, which ended June 30, boasting solid support at the grassroots level. 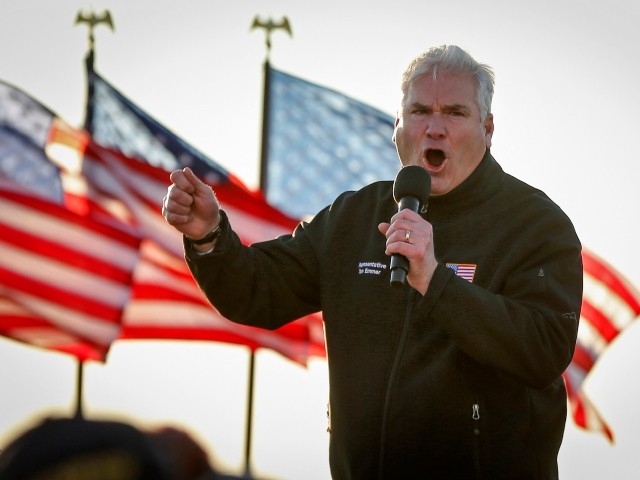 The ample funds will all back Emmer in his quest for electoral triumph, having told Breitbart News exclusively in February he believes the Republicans will retake the House majority in November next year and retire Democrat Speaker Nancy Pelosi once and for all.

AP contributed to this report