ROME — Speaker of the House Nancy Pelosi described this weekend’s private audience with Pope Francis as a “spiritual, personal and official honor.”

The pope’s leadership “is a source of joy and hope for Catholics and for all people, challenging each of us to be good stewards of God’s creation, to act on climate, to embrace the refugee, the immigrant and the poor, and to recognize the dignity and divinity in everyone,” Pelosi wrote in a press release on her website.

In her accolades to the pontiff’s “immense moral clarity,” Pelosi carefully avoided any mention of abortion, which Francis describes as “murder” and a “scourge,” likening it to hiring a paid assassin to take out a child. A “just society recognizes the primacy of the right to life from conception to natural death,” he has asserted.

In January 2015, Pelosi said that she knew “more about having babies than the pope,” insisting that a woman has “the right” to an abortion.

In her acceptance speech for abortion giant Planned Parenthood’s highest honor — the Margaret Sanger Award — Pelosi, who identifies as a Catholic, went still further, calling pro-lifers (like the pope) “dumb,” “closed-minded” and “oblivious.” 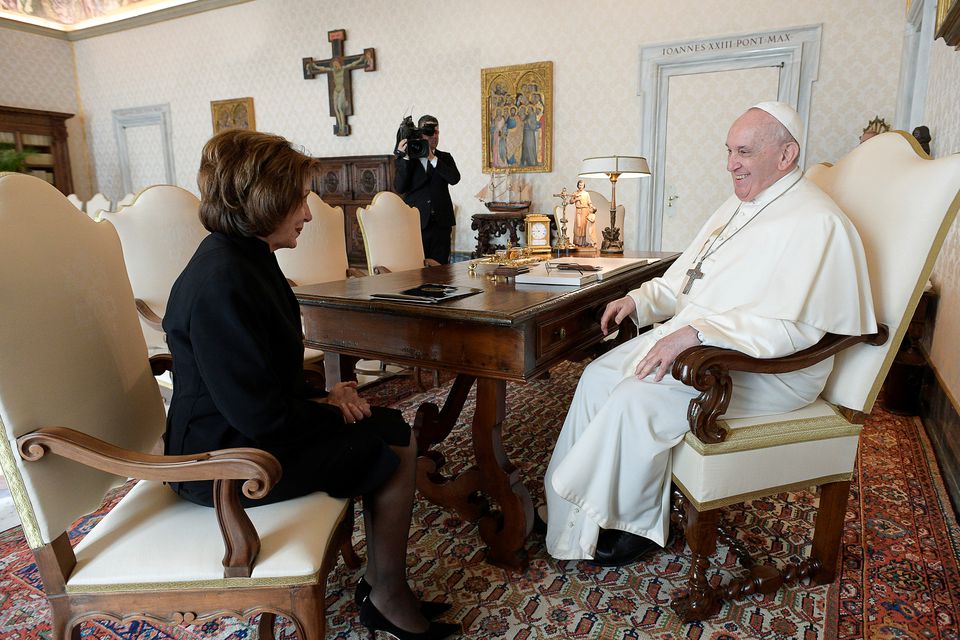 In describing Saturday’s meeting with Francis, however, Pelosi held to safe issues such as climate change and immigration.

Pelosi praised the pope’s 2015 encyclical letter on the environment Laudato Si’ as “a powerful challenge to the global community to act decisively on the climate crisis with special attention to the most vulnerable communities.”

The pontiff has brought “immense moral clarity and urgency” to the climate crisis, Pelosi said, and he “commands our attention to honor the Gospel of Matthew by serving ‘the least of these,’ lifting up those who have been left out or left behind.”

In her statement, Pelosi said that in her city of San Francisco, “we take special pride in Pope Francis, who shares the namesake of our city and whose song of St. Francis is our anthem.”