Breitbart News reported about the shooting, wherein 18-year-old Timothy George Simpkins allegedly opened fire after a fight in a classroom.

We are looking for a shooting suspect in today’s incident at @mansfieldisd Timberview School. Please call 911 if you know the whereabouts of 18-year old Timothy George Simpkins who may be driving a 2018 Silver Dodge Charger with license plate PFY-6260. pic.twitter.com/npaNVBDXRp

Berman tweeted, “3,600 gun deaths a year in Texas but GOP passed [a] law this year allowing you to carry [a] gun without training or permit.”

The Nation’s Elie Mystal asked, “Is THIS the time I mention that Texas ended its gun licensing laws making it immeasurably easier for a student to get access to a gun… or is that not information people are supposed to ever bring up again?” 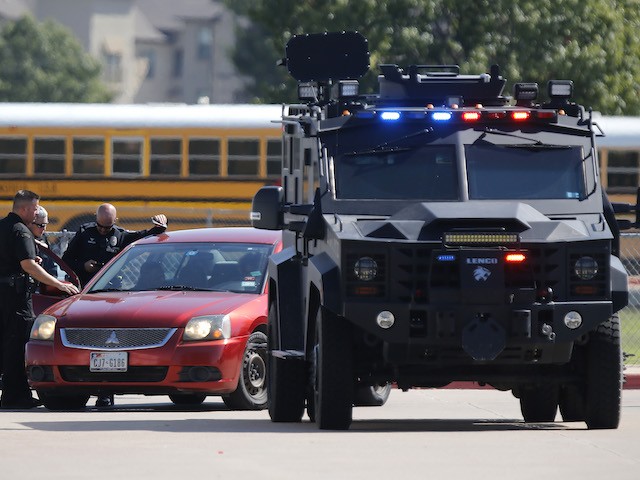 Emergency personnel work the scene in the parking lot at Timberview High School after a student used a gun on campus on October 6, 2021, in Arlington, Texas. (Stewart F. House/Getty Images)

Missing from the comments made by Watts, Berman, Mystal, and other gun-control activists – like Fred Guttenberg and George Takei – is the fact that Texas’ constitutional carry law only applies to persons 21-years-of-age and older. The shooting suspect is only 18. This is why Gov. Greg Abbott (R-TX) reacted to the shooting by noting, “Under Texas law it is illegal for the shooter to possess or have purchased the gun that was used in…[the] crime.”

Abbott noted that the shooter had the gun “illegally.”