The Supreme Court, on the first day of the new term, issued an order on a case involving funding for the construction of the wall between the U.S. and Mexico, ordering that lower courts should “consider what further proceedings are necessary and appropriate in light of the changed circumstances,” given that the Biden administration has already halted the project and rediverted funds.

The Sierra Club brought forth the original lawsuit against the Trump administration, contending the construction of the border wall was illegal. The case was filed to one of the most liberal districts, and the appeal to the appellate court affirmed the ruling against the Trump administration. The case, which involved President Trump’s decision to declare a national emergency and the Secretary of Defense using statutory authority to use military funds for the construction of the wall on the southern border, was subsequently filed to the Supreme Court in November.

“In 2019, following the President’s declaration of a national emergency requiring the use of the armed forces at the southern border, the then-Secretary of Defense authorized military construction projects involving border barriers pursuant to Section 2808. The questions presented are as follows,” the original petition for a writ of certiorari read, offering the two key questions of the case:

1. Whether respondents have a cognizable cause of action to obtain review of the Secretary’s compliance with Section 2808 in reprioritizing appropriated but unobligated funds for the military construction projects being authorized.

2. Whether the Secretary exceeded his statutory authority under Section 2808 in reprioritizing appropriated funds for the military construction projects being authorized. 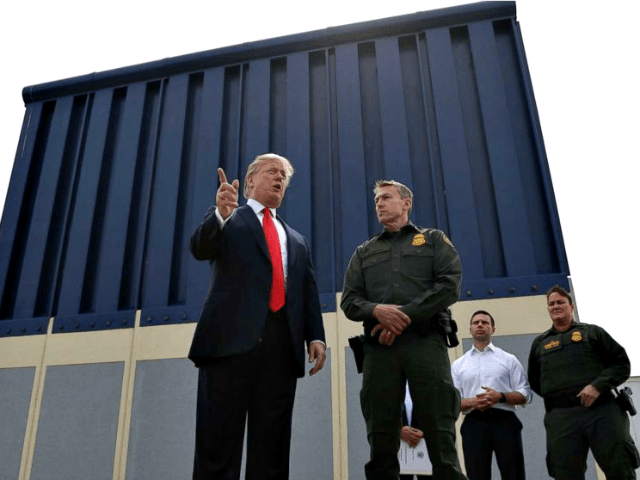 However, on Monday, the Supreme Court essentially said it is handing the case back to the lower courts, striking their rulings and handing the entire matter back to lower courts in light of the changed circumstances, as President Biden, on the very day of his inauguration, signed a presidential proclamation. In it, he announced “no more American taxpayer dollars be diverted to construct a border wall” — including those Congress appropriated –essentially shutting down the case:

NOW, THEREFORE, I, JOSEPH R. BIDEN JR., President of the United States of America, by the authority vested in me by the Constitution and the laws of the United States of America, including section 202 of the National Emergencies Act (50 U.S.C. 1601 et seq.), hereby declare that the national emergency declared by Proclamation 9844, and continued on February 13, 2020 (85 Fed. Reg. 8715), and January 15, 2021, is terminated and that the authorities invoked in that proclamation will no longer be used to construct a wall at the southern border.

Essentially, the Supreme Court’s decision could very well lead to a full dismissal of the case by lower courts — a legitimate possibility, as the wall has been stopped and the current administration is not continuing the appeal.

The petition for a writ of certiorari is granted. The judgment is vacated, and the case is remanded to the United States Court of Appeals for the Ninth Circuit with instructions to direct the District Court to vacate its judgments. The District Court should consider what further proceedings are necessary and appropriate in light of the changed circumstances in this case.

The case is Biden v. Sierra Club, No. 20-138 in the Supreme Court of the United States.