Democrats can reportedly pass a debt limit reconciliation package within two weeks to avert defaulting on the U.S. debt on October 18, but Sen. Chuck Schumer (D-NY) has objected to the process.

Such a maneuver is what Sen. Mitch McConnell (R-KY) has suggested Democrats execute to avoid default in hopes that the process would legislatively jam President Biden’s massive tax and spend agenda in Congress.

“It’s still not entirely clear, however, if Democrats could suspend the debt limit for a certain amount of time under this approach or whether they would have to increase the debt limit by a fixed number, say several trillion dollars,” Punchbowl explains. “The second is a tougher vote politically and one of the reasons why Democrats don’t want to be forced into this maneuver.”

A vote-a-rama is when the senators can propose any amount of amendments to budget-related measures, which are voted on until consensus is achieved.

A debt ceiling reconciliation package would perhaps not be the Democrats’ first choice. But if the course is decided upon, “Senate insiders estimate it could be completed in as little as two weeks.” But in reality, vote-a-ramas have no time limit. And if the Senate approved the package, the House would have to vote on the measure.

The debt limit reconciliation maneuver could further increase Democrat infighting and ultimately delay Biden’s massive tax and spend proposals in Congress. With the 2022 midterms coming next year, 2021 is the ideal time for the Biden-Harris administration to enact its radical ideas. Election years usually are more difficult to pass legislation because politicians’ voting records undergo more scrutiny in their respective races.

Regardless of the Senate parliamentarian’s reported ruling, Schumer claimed Wednesday the Senate “cannot and will not go through a drawn-out and unpredictable process sought by the minority leader.” 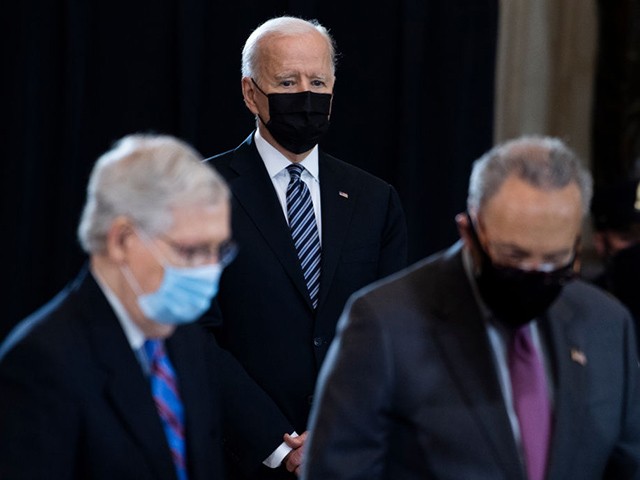 But McConnell has called Schumer’s bluff. “Of course the debt ceiling has to be raised. They have a way to do it,” McConnell said Tuesday.

“Democrats control the entire government—the Senate, the House and the White House. They intend to sideline Republicans and go it alone to slam American families with historic tax hikes and borrowing,” McConnell added. “So they will need to raise the debt limit on a partisan basis as well.”