Former Secretary of State Hillary Clinton on Thursday again expressed support for ending the filibuster, accusing the Republican Party of not respecting the rule of law during an interview at The Atlantic Festival’s Ideas Stage.

Clinton stated she “absolutely” would back getting rid of the filibuster, highlighting Senate Republicans’ objection to voting on Merrick Garland’s nomination by then-President Barack Obama to the Supreme Court in 2016

“Keeping the filibuster now, when you’re dealing with a political party that does not respect the rule of law, does not even respect the process unless it works for them — you know, witness what they did to Merrick Garland when President Obama had every right to appoint a Supreme Court justice,” she remarked.

.@HillaryClinton tells @JenSeniorNY that she supports abolishing the filibuster because she believes Democrats are dealing with an opposing party that “does not respect the rule of law, does not even respect the process unless it works for them.” #TAF21 https://t.co/wTofUZ5K09 pic.twitter.com/SHyKrNxRbr

The twice-failed presidential candidate then claimed that the United States is “in the middle of a constitutional crisis.”

“People are still arguing about stuff that is important but not as fundamental as whether or not our democracy will be broken, and then taken over and minority rule will be what we live under,” she stated.

The filibuster is an Upper Chamber rule which essentially sets a 60-vote threshold for most bills to move to a final vote. 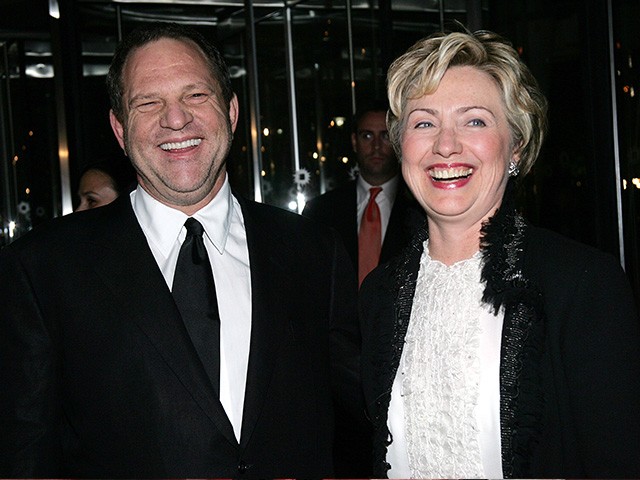 Clinton served as U.S. Senator for New York from 2001-2009. In this 2004 photo, she is seen posing with movie producer Harvey Weinstein. (Evan Agostini/Getty Images)

Back in March, Clinton joined Democrats in supporting the elimination of the filibuster, arguing it should be done away with due to “constitutional matters.”

In an interview with the Just Something About Her podcast, Clinton told host and former aide Jennifer Palmieri that the filibuster should be repealed in order to pass voting rights legislation.

“The filibuster stands in the way of a lot of legislation and whether or not it can be either reformed and amended or eliminated is what we will find out in next weeks,” Clinton explained at the time. “It certainly should be lifted for constitutional matters, and I would put election law matters at the top of that list.”