“A deal is a deal,” Jayapal tweeted about her plan to maintain leverage over the $3.5 trillion reconciliation package. “We’ll proudly pass both bills, but we’ll only vote for the infrastructure package AFTER we get the transformational Build Back Better Act through.”

Jayapal also said the number of Democrat lawmakers joining her in maintaining leverage over Biden’s agenda is growing. “It’s actually increasing, and it’s increasing from members who aren’t just within the Progressive Caucus,” she said about the number of members who will vote “no” on the $1.2 trillion “bipartisan” infrastructure bill.

Jayapal’s position has forced House Speaker Nancy Pelosi (D-CA) to break her signed promise to more temperate Democrats and push the vote for the $1.2 trillion bill from Monday to Thursday. The decision was presumably made to allow more time for Democrats to break their infighting over both the “bipartisan” bill and the reconciliation package.

The $3.5 trillion package, written by self-proclaimed socialist Bernie Sanders (I-VT), is not ready for a House vote, as Rep. Stephanie Murphy (D-FL) blocked a key tax provision on proscription drug makers that Sanders believes is needed. 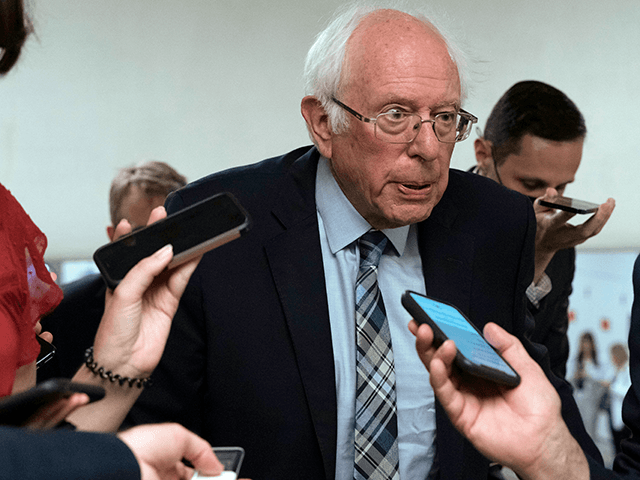 Sen. Bernie Sanders (I-VT), talks to reporters as he walks to the Senate chamber ahead of a test vote scheduled by Sen. Chuck Schumer (D-NY) on the infrastructure deal senators brokered with President Joe Biden at the time, on Capitol Hill, in Washington, DC, July 21, 2021. (AP Photo/Jose Luis Magana)

Yet Murphy stated last week she is not the one responsible for the infighting. “The mistrust that exists currently between members will spread to mistrust between leadership and members, and I think that wouldn’t be healthy for our Congress accomplishing Biden’s agenda,” Murphy claimed.

Other House Democrats have taken matters into their own hands. Reps. Vicente Gonzalez (D-TX) and Filemon Vela (D-TX) are negotiating with Jayapal in the press, hoping to entice far-left House members to vote for the “bipartisan” bill with a promise that the $3.5 trillion package will pass the in the future.

“We support swift passage of the president’s $3.5 trillion reconciliation package,” they wrote in a joint statement. “The bipartisan infrastructure framework would, on average, deliver $1.2 billion per congressional district.”

But Jayapal remains unconvinced and unwilling to give up her hard-earned leverage. Monday’s comments suggest she will only vote for the “bipartisan” bill “after” the reconciliation package is enacted into law. 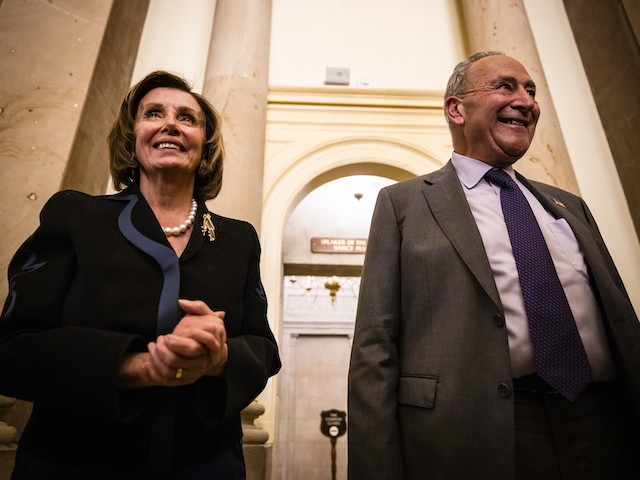 Speaker of the House Nancy Pelosi (D-CA) and Senate Majority Leader Chuck Schumer (D-NY) talk to reporters after a bipartisan group of Senators and White House officials came to an agreement over the Biden administrations proposed infrastructure plan at the U.S. Capitol on June 23, 2021, in Washington, DC. (Samuel Corum/Getty Images)

“The president needs to pick up the phone and call people,” a high ranking Democrat aide told Politico Playbook. “The person argued that the White House has been in ‘listening mode’ for too long and needs to bang heads to get this vote over the finish line this week.”