Pakistani Prime Minister Imran Khan incorrectly stated on Friday that former U.S. President Ronald Reagan compared the Afghan Mujahidin to the “Founding Fathers” of the U.S. while hosting some of the group’s leaders at the White House in 1983.

“President Ronald Regan invited them to the White House in 1983. And according to a news item, he compared them to the founding fathers of the United States. They were heroes,” Khan said in a pre-recorded speech presented at the 76th session of the U.N. General Assembly in New York City on September 24.

Khan made the statement while recalling the history of both Pakistan and the U.S. government’s involvement in Afghanistan, which was overtaken by the Taliban on August 15.

“Pakistan and the United States trained Mujahideen groups to fight for the liberation of Afghanistan. Amongst those Mujahideen groups was Al Qaeda, various groups from all over the world. There were Mujahideen, Afghan Mujahideen. These were considered heroes,” the Pakistani leader continued. 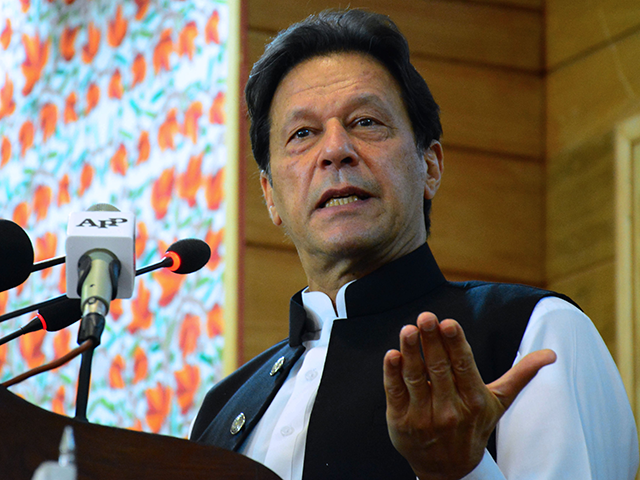 In an effort to prove his point that the Afghan Mujahidin were considered “heroes” by the U.S. government in the 1980s, Khan noted that former U.S. President Ronald Reagan hosted a delegation of the Islamist militants at the White House while he was in office. Here Khan falsely attributed a Reagan quote from 1985 referring to Nicaraguan rebels to the 1983 meeting with the Mujahidin.

“I’ve spoken recently of the freedom fighters of Nicaragua. You know the truth about them. You know who they’re fighting and why. They are the moral equal of our Founding Fathers and the brave men and women of the French Resistance,” Reagan said on March 1, 1985. He made the comparison during a speech at an annual dinner of the Conservative Political Action Conference, according to USA Today, which conducted a “fact-check” of the quote on August 25.

While former President Reagan did not specifically liken the Afghan Mujahidin, or Islamist militants of the Soviet-Afghan War, to the U.S. Founding Fathers, he did host a delegation of them at the White House on February 2, 1983 “to discuss Soviet atrocities in Afghanistan,” according to the Ronald Reagan Presidential Library and Museum. An official photo of the meeting published by the library credits the Mujahidin as “freedom fighters.”

“The Reagan administration helped fund the Mujahedeen fighters in Afghanistan, some of whom formed the Taliban,” USA Today recalled last month.

“In 1993-1994, Afghan Islamic clerics and students, mostly of rural, Pashtun origin, formed the Taliban movement,” the U.S. Congressional Research Service stated in a 2009 report. “Many were former mujahedin who had become disillusioned with conflict among mujahedin parties and had moved into Pakistan to study in Islamic seminaries.”

Khan in his U.N. speech on Friday mentioned that al-Qaeda was “amongst” the Mujahidin groups the U.S. and Pakistan trained “to fight for the liberation of Afghanistan” in the 1980s.

Al-Qaeda would later become an international jihadist terror organization. The U.S. government held al-Qaeda, and its leader at the time, Osama bin Laden, responsible for the September 11, 2001, terror attacks on American soil. The U.S. military invaded Afghanistan in the fall of 2001 in connection with the incident, citing the Taliban’s alleged harboring of Bin Laden within Afghanistan’s borders. The Taliban, a hardline Sunni Muslim organization, governed Afghanistan from 1996-2001. The U.S. later tracked Bin Laden to Abbottabad, Pakistan, where a U.S. Special Forces unit neutralized the figure in May 2011. 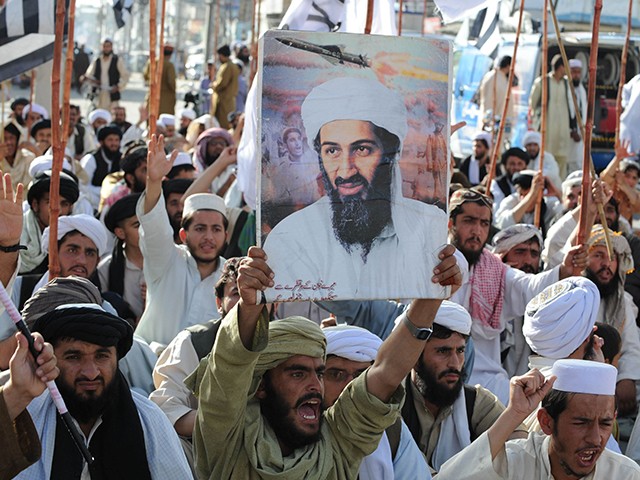 Supporters of hardline pro-Taliban party Jamiat Ulema-i-Islam-Nazaryati (JUI-N) shout anti-US slogans during a protest in Quetta on May 2, 2011, after the killing of Osama Bin Laden by U.S. Special Forces in a ground operation in Pakistan’s hill station of Abbottabad. (BANARAS KHAN/AFP/Getty Images)

The Associated Press published a timeline of “more than 40 years of war in Afghanistan” on July 2. In a section of the chronology dated the “1980s,” the news agency detailed:

CIA’s covert Operation Cyclone funnels weapons and money for the [Soviet-Afghan] war through Pakistani dictator Mohammed Zia-ul Haq, who calls on Muslim countries to send volunteers to fight in Afghanistan. Bin Laden is among the thousands to volunteer.

The AP referred to the U.S. Central Intelligence Agency (CIA), which provided the mujahidin with “shoulder-held anti-aircraft Stinger missiles” by 1986. This action ultimately helped “turn the course” of the Afghan-Soviet War and led to the Soviets “negotiating [a] withdrawal” from the country, according to the U.S.-based news agency.