The U.S. government’s intervention in foreign countries leaves behind “death” and “scars,” Cuban leader Miguel Marion Diaz-Canel Bermudez said on Thursday at the 76th session of the U.N. General Assembly.

The Cuban leader argued that the U.N. “cannot ignore the lessons learned in Afghanistan.” He referred to the Taliban’s ouster of Kabul’s U.S.-backed government on August 15. The takeover followed a nearly twenty-year-long U.S. and N.A.T.O. military operation in Afghanistan, which attempted to install a democratic government in Kabul.

It took two decades of occupation, a toll of thousands of deadly casualties, 10 million displaced and billions of dollars in costs – which turn into profits for the military-industrial complex – to reach the conclusion that terrorism cannot be prevented or fought with bombs; that occupation only leads to destruction and that no country has the right to impose its will on sovereign nations.

Elsewhere in his U.N. speech, Bermudez called for an end to alleged “foreign interference” in several nations including Nicaragua, Syria, and Belarus.

“We ratify our firm support to the brother people of Nicaragua and its National Reconciliation and Unity Government, led by Commander Daniel Ortega, who are courageously and proudly defending the achievements attained against the threats and interventionist actions of the US government,” the Cuban leader said. 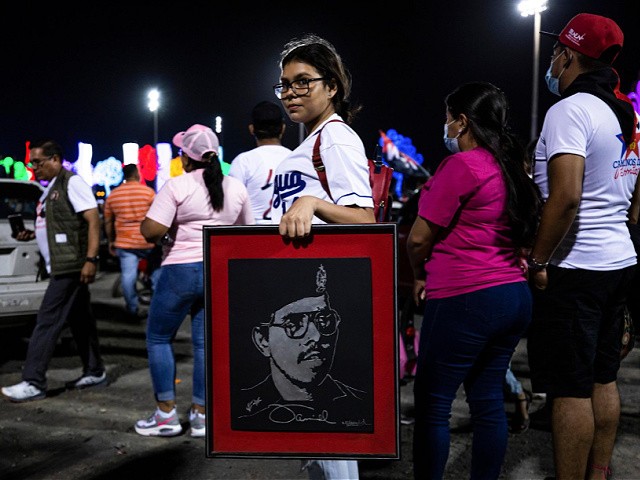 A youth carries a portrait of Nicaraguan President Daniel Ortega during commemorations for the anniversary of the triumph of the 1979 Sandinista Revolution that toppled dictator Anastasio Somoza in Managua, Nicaragua, late Sunday, July 18, 2021. (AP Photo/Miguel Andrés)

Nicaragua’s socialist ruling party, the Sandinista National Liberation Front (FSLN), has allegedly imposed “increasing restrictions” on the voting rights of Nicaraguan citizens ahead of an upcoming general election, according to a recent U.N. report.

“Between 22 June and 6 September, my Office documented the arbitrary detention of 16 people, including political leaders, human rights defenders, business people, journalists, and peasant and student leaders, in addition to 20 others detained since 28 May,” U.N. High Commissioner for Human Rights Michele Bachelet told the U.N. Human Rights Council in an oral report on September 13.

“This group includes six men and one woman who publicly stated that they wanted to run for the presidency, and a vice-presidential candidate has been charged while at liberty,” she said.

Nicaraguans will elect the country’s next president, members of parliament, and National Assembly in a general election on November 7. Nicaragua’s ruling party passed a law in late 2020 banning political candidates in this year’s general election “who lead or finance a coup … encourage foreign interference, ask for military intervention … propose or plan economic blockades, [or] applaud and champion the imposition of sanctions against Nicaragua or its citizens,” the Associated Press (AP) reported last December.

Around the same time, the U.S. government “imposed sanctions on about 27 people close to [Nicaraguan President Daniel] Ortega and his wife, Vice President Rosario Murillo, including Murillo herself and three of her children with Ortega” in an effort to support “free elections,” according to the AP.