Former Democrat Gov. Terry McAuliffe is leading Republican Glenn Youngkin in the Virginia governor’s race, according to a poll conducted by the L. Douglas Wilder School of Government and Public Affairs at Virginia Commonwealth University.

According to the survey, released Monday, 43 percent of likely voters support McAuliffe — nine points higher than the 34 percent who chose Youngkin. This reflects a greater lead than McAuliffe saw last month, when he led Youngkin by three percentage points, 40 percent to 37 percent.

“The increase in the undecided and those unable to commit for either is noteworthy,” he continued, adding the poll was taken prior to any debates between the two candidates.

“How the candidates show the people what they propose dealing with the pandemic and its effects are obvious concerns,” he added.

The two candidates faced off in their first debate Thursday, which featured McAuliffe and Youngkin clashing over vaccine mandates. During the debate, Youngkin made it clear he is a “strong, strong” advocate for the vaccine but maintained that individuals “should be allowed to make that decision on their own.” He also said he does not believe President Biden has the authority to force people to take the vaccine. 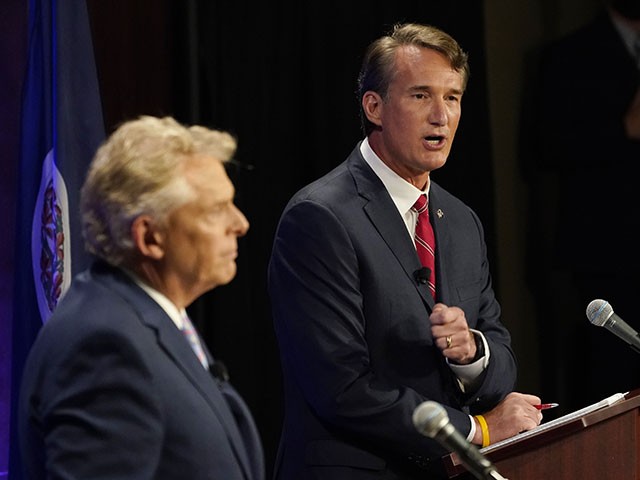 McAuliffe, who once expressed a desire to “make life difficult” for unvaccinated people, said he supports employer vaccine mandates. He also said he would support schools requiring eligible children to be vaccinated for the Chinese coronavirus.

In an attempt to firmly display the contrast between himself and his competitor, McAuliffe said, “I am for requiring mandate vaccinations. He’s not. He likes to do PSAs [public service announcements]. PSAs aren’t going to get you anything.”

McAuliffe came under fire after a photo emerged of him brazenly violating federal law, failing to wear a mask on an Amtrak train. In addressing the controversy, the Democrat simply said he is “very good” about wearing his mask but said everyone can “always do better.”

Early voting began in the Old Dominion on Friday.