After the House members returned to Washington from their August recess, the Washington Free Beacon reported that Stevens’ honeymoon overlapped with two markup sessions she missed on the House Committee on Education and Labor.

During the markups, members had voted on amendments to add to the partisan $3.5 trillion spending package. After the month-long recess in which members were supposed to spend time in their district to meet with constituents, as most did, Stevens got married on September 3 to Rob Gulley, a software engineer.

The Beacon reported the couples’ wedding registry on Zola shows they planned to “head up north right after the wedding,” and that they wrote, “we’ll put these funds towards good use” by spending “time together” doing activities such as “boating, couples massage, [and] dinner.” 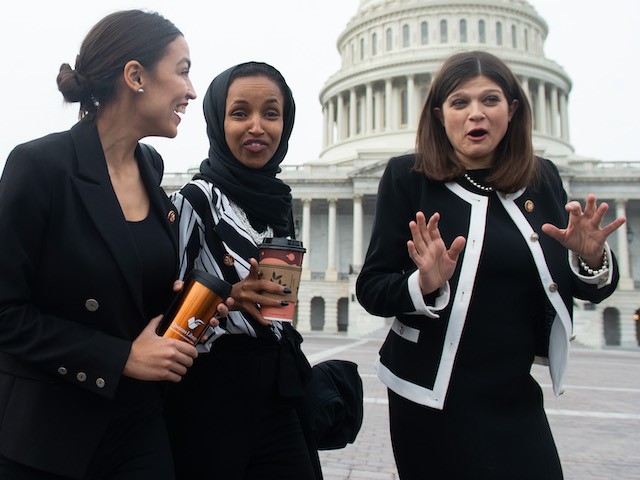 US Rep. Alexandria Ocasio-Cortez, Democrat of New York; US Rep. Ilhan Omar, Democrat of Minnesota; and US Rep. Haley Stevens, Democrat of Michigan, arrive for a photo opportunity with the female House Democratic members of the 116th Congress outside the US Capitol in Washington, DC, January 4, 2019. (Photo credit should read SAUL LOEB/AFP via Getty Images)

The Democrat, who has been on the committee her entire tenure in Congress, ended up missing votes on at least a dozen amendments. The report stated one of the amendments she missed would have prohibited funds from the bill from being used at universities that host Chinese government-funded Confucius Institutes.

Stevens did not return the Beacon’s request for comment.

In addition to the Confucius Institute amendment, which was proposed by Rep. Jim Banks (R., Ind.), Stevens skipped votes on amendments that would prohibit illegal immigrants from receiving Pell grants and require local education agencies that receive funds under the bill to offer in-person instruction to vulnerable students.

In the past, Breitbart News reported that Stevens has been friendly to Communist China, disputing claims that they are the “bogeyman,” despite constant acts of corporate espionage against American companies and the genocide of Uyghur Muslims.

After the reports from Breitbart News and after refusing to answer questions on the matter, Stevens reversed her stance on China. The Democrat eventually said during a TV appearance that she was ready to “take on China.”

Breitbart News also reported that Stevens and guests at her wedding appeared maskless in photos. One photo was taken next to Michigan Attorney General Dana Nessel (D) at her reception. In the background of the pictures, it appeared no one else was wearing masks either.

So honored to officiate the wedding of my Congressfriend ⁦@HaleyLive⁩. May she and Rob have many wonderful years of love and happiness. pic.twitter.com/M0DUsFQmpO

Nessel tried to defend the pictures on social media, saying, “For those asking, vaccinations and proof of Covid negative tests were required to attend the wedding.”