Pentagon press secretary John Kirby refused to address allegations contained in a new Bob Woodward and Robert Costa book that chairman of the Joint Chiefs of Staff Gen. Mark Milley told his Chinese counterpart if then-President Donald Trump ordered an attack on China he would give advance warning.

“I’m not going to speak to unconfirmed reports from a book that we haven’t looked at and read yet, and certainly not to a conversation that — that took place before the administration took office. I’m just — I’m not going to go there,” Kirby said at a press briefing on Wednesday at the Pentagon.

It’s not that I’m not denying yet, I am simply — I am going to refuse to speak to — to specific anecdotes that — that are in this book. I am in no position to do that and I don’t think it would be helpful for me to try to speculate one way or the other about the veracity of these — of these anecdotes.What I can tell you is that a chairman of the — any chairman, chairmen across multiple administrations routinely have communications, direct channel communications with their counterparts in — in other countries.

And it is particularly important to have those communications with a nation-state with which there are real and significant tensions to try to reduce those, clear things up, make sure you reduce the risk of miscalculation. And I think you saw in the statement that the chairman’s office that they put out earlier today, that that is exactly what was behind the context here for this — for this particular call, which took place, you know, at a difficult time in our nation’s history in this particular transition.

Woodward and Costa wrote in the book, which is due to be released next week, that Milley told his Chinese counterpart on October 30, 2020, four days before the 2020 election, “General Li, you and I have known each other for now five years. If we’re going to attack, I’m going to call you ahead of time. It’s not going to be a surprise.” 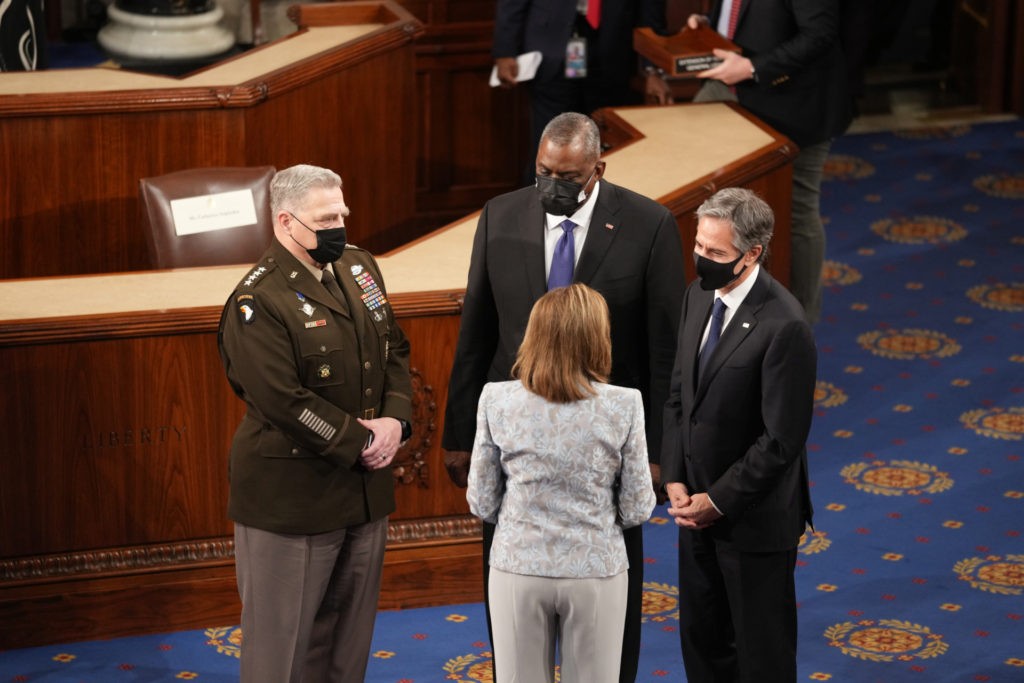 Speaker Nancy Pelosi with, from left, Chairman Mark Milley of the Joint Chiefs of Staff, Defense Secretary Lloyd Austin and Secretary of State Antony Blinken after President Joe Biden delivered an address to a joint session of Congress at the Capitol in Washington on Wednesday, April 28, 2021. ( Doug Mills/Pool via USA TODAY NETWORK)

When asked whether it is “common” in the chairman’s conversations with his counterparts, that he would inform them if the U.S. was about to strike, Kirby said, “Without speaking to that hypothetical, what I again would say is that…a part of the value of having these communications, particularly with countries like Russia and China with which we are experiencing tension is to try to reduce the risks of miscalculation and conflict, to try to take down tensions to make clear what our national security interest are.”

A spokesman for Milley did not deny the allegation either in a statement he released earlier in the day.

The Chairman of the Joint Chiefs regularly communicates with Chiefs of Defense across the world, including with China and Russia. These conversations remain vital to improving mutual understanding of U.S. national security interests, reducing tensions, providing clarity and avoiding unintended consequences or conflict.

His calls with the Chinese and others in October and January were in keeping with these duties and responsibilities conveying reassurance in order to maintain strategic stability. All calls from the Chairman to his counterparts, including those reported, are staffed, coordinated and communicated with the Department of Defense and the interagency.

General Milley continues to act and advise within his authority in the lawful tradition of civilian control of the military and his oath to the Constitution.

Asked whether Defense Secretary Lloyd Austin believes Milley has the authority to warn adversaries before a military attack without specifically being told by civilian leaders, Kirby responded, “Again, I’m not going to engage in specific hypotheticals here…I just don’t see this as — a useful exercise. And it, you know, it’s a bit of a roundabout way of trying to get me to speak to, again, an unconfirmed report in a book, and I’m just not able to do that.”

Kirby also said Austin has “complete and utter trust and confidence in General Milley and in his role as chairman of the Joint Chiefs of Staff.”

Republicans are calling for Milley to resign, be fired, and even court-martialed if the allegations are true. Milley is set to testify to the House and Senate in late September on Afghanistan, but he is now also expected to answer questions on whether he tried to usurp and undermine Trump’s authority as president.