Maloney was asked by the host of Bloomberg Balance of Power if he was concerned with Biden’s approval ratings “heading south” after they were originally “pretty robust.”

SINKING LIKE A STONE: President Joe Biden's approval rating hit a new low with the Trafalgar Group poll, which was partially taken after he announced a federal vaccine mandate. https://t.co/I2sN1Iu8SD

“Of course,” Maloney said, trying to play off Biden’s sinking poll numbers that recently hit an all-time low for the president.

The DCCC chair added he’s proud the “president is tackling tough problems.” Maloney also showed support for Biden by saying “Nobody said it would be easy ending a 20-year war, no one said he was going to be easy ending the global pandemic. But, he is focused on science, and he’s focused on getting people vaccinated.”

A recent Economist/YouGov poll revealed Biden’s poll numbers have crashed to a new low of 39 percent during his short time in office so far. The poll also showed that 49 percent disapprove. 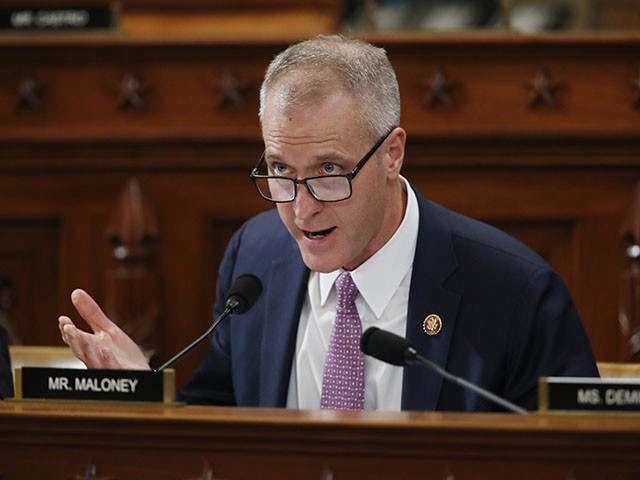 Breitbart News previously noted, “Biden’s evaporating approval numbers are primarily due to Democrats, who have begun abandoning him amid the challenges of inflation, Afghanistan, and coronavirus.”

Biden botched the withdrawal from Afghanistan, which resulted in the death of 13 U.S servicemembers and wounding more, in addition to the hundreds of U.S. citizens, Afghan allies, and vulnerable Afghans left stranded in the county now controlled by Taliban terrorists.

During a speech from the White House, Biden said, “This is not about freedom or personal choice … It’s about protecting yourself and those around you.” The president then added, “We’ve been patient, but our patience is wearing thin.”