The Club for Growth launched a series of ads against vulnerable House Democrats Wednesday as the conservative group’s polling shows a strong path for Republicans to regain the House majority during the 2022 midterms.

The Club for Growth, one of the leading conservative activist organizations, launched television ads in ten congressional districts targeting Democrats on their rampant spending, subsequent inflation, and the $3.5 trillion infrastructure bill that will raise taxes on working-class Americans.

The Club for Growth ads will launch on September 16, and it will serve as part of a $2 million campaign against President Joe Biden and Speaker Nancy Pelosi’s (D-CA) leftist legislative agenda. The ads will run against nine swing district Democrats and Rep. Adam Kinzinger (R-IL), a Never Trump Republican.

“Washington is out of touch with America,” said Club for Growth President David McIntosh. “Democrats and even some Republicans need to realize that their constituents will roundly reject the out-of-control spending and $3 trillion increase in taxes.”

The ads will target:

Club for Growth also released a poll that revealed that Republicans have a strong chance of taking back the House majority during the 2022 midterm elections.

The poll, conducted by WPA Intelligence, found that Democrat spending and soaring inflation have created the conditions to take out Pelosi’s historically slim majority.

The survey said that Republicans were only within two percent of Democrats on the generic ballot.

The survey memo notes that Democrats likely need to outperform Republicans on the generic ballot by a three-point margin to barely hold the House majority. The survey also notes that Republicans would also flip seats thanks to redistricting.

The survey also found that most Americans, or 51 percent, view inflation as a very big problem, 47 percent believe that adding to the deficit is a big problem, and 41 percent of voters also view high taxes as a problem. 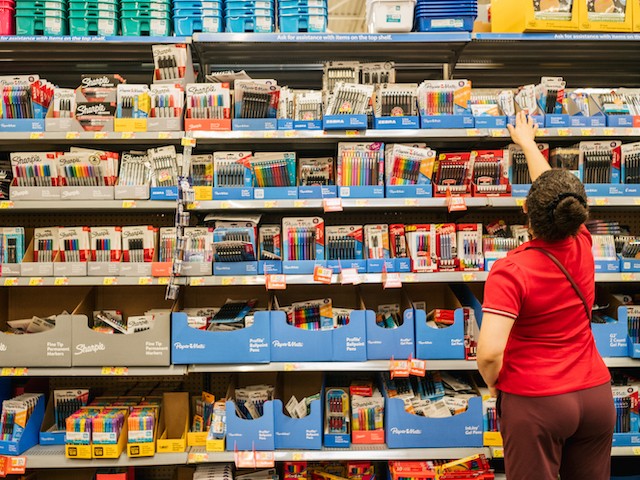 A customer shops at a Walmart store on August 04, 2021, in Houston, Texas. The cost of back-to-school items is on the rise due to a combination of delays in U.S. manufacturing and heightened consumer demand for goods. (Brandon Bell/Getty Images)

The Democrats’ $3.5 trillion bill would contribute to boost federal spending and increase taxes on most Americans.

The Democrats’ $3.5 trillion bill would also break President Joe Biden’s pledge not to increase taxes on working-class Americans, according to a study released by the Joint Committee on Taxation (JCT).

The JCT found that the House Ways and Means Committee’s portion of the $3.5 trillion infrastructure bill would increase taxes on Americans making over $50,000 or more annually in the calendar year 2031, according to a Joint Committee on Taxation (JCT) report.