Alexandria Ocasio-Cortez (D-NY), a self-described Democratic Socialist, is now facing an ethics complaint after accepting a $35,000 ticket to attend the Met Gala 2021, a fundraiser for the Metropolitan Museum of Art in New York City held on Monday.

Thomas Jones, founder of the American Accountability Foundation wrote in an ethics complaint that he believes the congresswoman, who represents parts of the Bronx and Queens, broke House rules by accepting “an impermissible gift.”

“[W]hile the individual’s invitations may bear the name of the Metropolitan Museum of Art, the Museum has ceded control over the invitations to a for-profit company, specifically Condé Nast, and to its Chief Content Officer, Anna Wintour,” Jones wrote. 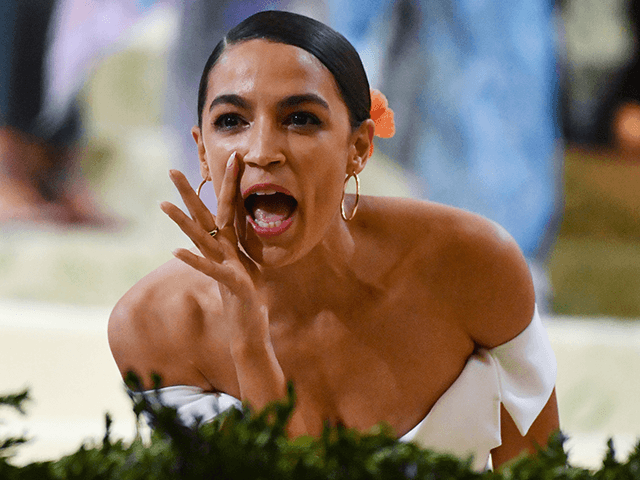 Alexandria Ocasio-Cortez at the 2021 Met Gala Celebrating In America: A Lexicon Of Fashion. (New York City)

He wrote that “the New York Times outlines that the Met does not have control over who is invited to the event, but rather the for-profit company, is in control of who gets invited.”

Jones, a former aide to Sen. Ron Johnson (R-Wis.), additionally claimed that Istagram, which is owned by Facebook, “was able to purchase access to Representative Ocasio-Cortez that is unavailable to average citizens” by sponsoring a table at the Gala.

The Office of Congressional Ethics can refer complaints to the House Ethics Committee for further review.

Proud to work with [James,] a sustainably focused, Black woman immigrant designer who went from starting her dream [company] at a flea market in Brooklyn to winning [a Council of Fashion Designers of America award] against all odds — and then work together to kick open the doors at the Met.

“House ethics information available online says members of Congress can borrow works of art — in this case the dress — so long as there’s a written agreement with the owner specifying that it’s not a gift and will be returned,” the Post reported. “For gifts, House members can only accept $100 worth of items per year from a specific source.”