The student newspaper editorial board at Case Western Reserve University in Ohio criticized the school for allowing a pro-life group to be established on campus because it poses “a danger to the student body.”

The Observer newspaper titled its editorial, “Case For Life is a danger to the student body — the failure of CWRU to protect its community.”

The editorial reveals students have embraced the narrative promoted by the abortion industry, including Planned Parenthood, that promotes “bodily autonomy” for the mother but not the unborn child, which the authors refer to as a “group of cells.”

The editorial says, in part:

This goes to show that despite the outrage by the student body and despite the fear that Case for Life instills, the university continues to refuse to take action. To put it simply, CWRU does not care about its students. If they actually cared, they would have immediately considered concerns about the student body’s immediate safety and the broader school-community impacts, and they would have easily determined this organization to pose a danger. Case for Life may have voiced their opposition to sidewalk counseling through an Instagram Direct Message (even though there is nothing to hold them accountable to that); however, they do not contest participating in protests outside of clinics or other forms of imposing their views on vulnerable people within and surrounding the CWRU community. Case for Life says its mission is to “protect and promote respect for all life,” and they commit to a “nonviolent approach in all that [they] do.” But protesting outside of an abortion clinic is inherently violent; preying on vulnerable people who, no matter the circumstance, have chosen to do what is best for their life violently threatens their privacy and their right to make that decision. This organization does not value the pregnant person’s life. 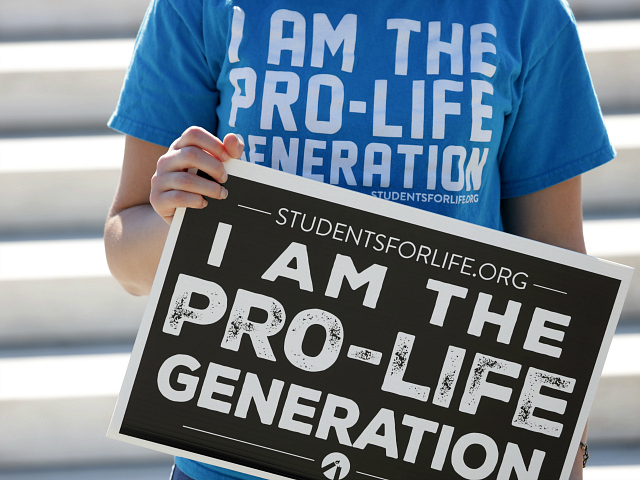 A pro-life activist holds a sign during a demonstration in front of the U.S. Supreme Court June 29, 2020, in Washington, DC. (Photo by Alex Wong/Getty Images)

Campus Reform reported on the editorial:

In an email to Campus Reform, CRWU said that it “does not agree” with the editorial board, but also “strongly support[s] the student newspaper’s right to express its perspective.”

“Case Western Reserve’s Division of Student Affairs formally recognized Students for Life last fall because, as the division’s leader wrote then, denying it would violate the university’s policy on freedom of expression,” CWRU explained. “It notes in part ‘..it is not the proper role of the University to exclude or suppress those ideas some may find unwelcome, disagreeable, or even offensive.’”

In Spring 2020, Campus Reform reported over 600 CWRU students signed a petition asking for a referendum vote to defund a Students for Life group, claiming that it is “coercive to present morally-founded opinions.”