Former Virginia Gov. Terry McAuliffe (D), who is running for governor again, sent out several emails on the 20th anniversary of the September 11 attacks asking supporters to donate to his gubernatorial campaign as he prepares for early voting to begin this week.

The emails came through periodically throughout the day of remembrance from about noon through 8 p.m. The initial email is below, and three subsequent emails from McAuliffe on Saturday had similar formatting: 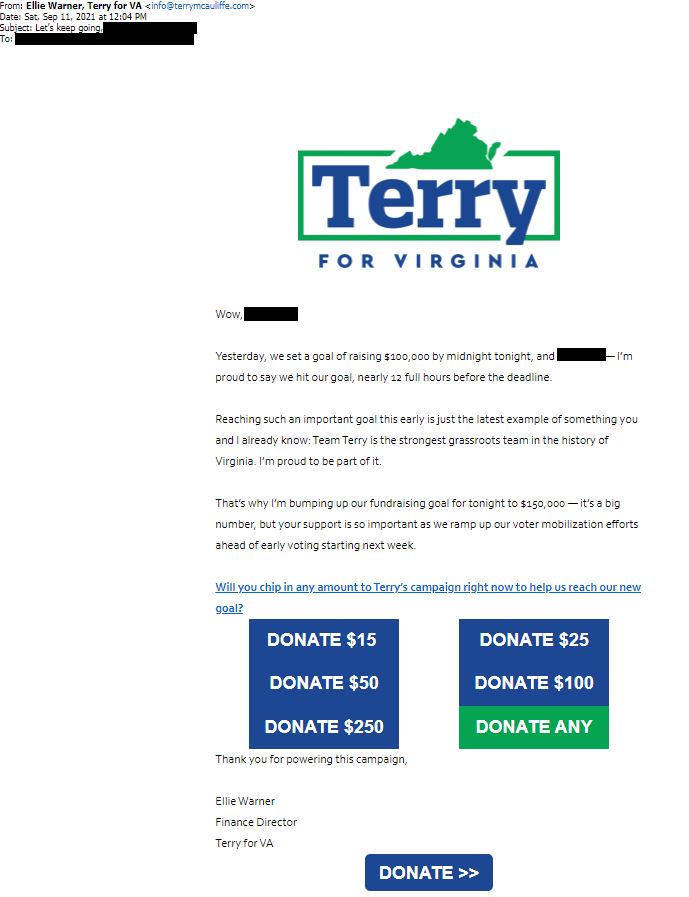 Outside of those emails, the Virginia Democrat honored the anniversary by attending a ceremony in Arlington in memory of the Pentagon attack on September 11, 2001, according to photos McAuliffe shared online.

Asked about the emails, McAuliffe’s campaign noted to Breitbart News that a fifth email, sent on Saturday morning around 9 a.m. — ahead of the string of fundraising emails — centered around remembering the 2001 tragedy and did not include any donation requests.

“As Americans, we will never forget what was lost that day. … I hope you will join me in taking a quiet moment to reflect on the loss and sacrifice of this day, and share in my hope for a stronger, brighter future for our Commonwealth and our country,” the email stated.

McAuliffe has an extensive history of raising money in politics. In the early 2000s, he served on the board of the Clinton Foundation and also as chair of the Democratic National Committee.

He made headlines when BuzzFeed News published excerpts from his 2007 book called What a Party that gave glimpses into the political insider’s personal life. The excerpts revealed McAuliffe once left his wife at a hospital as she was about to give birth so he could attend a party for a Washington Post reporter, and, on a separate occasion, left his wife and newborn son in a car on their way home from the hospital so he could show face at a party that would raise “a million bucks for the Democratic Party.”

More recently, the Virginia Democrat took heat for abandoning a forum for the disabled community early so he could appear at a Las Vegas fundraiser with embattled Nevada Gov. Steve Sisolak (D).

McAuliffe’s latest request for donations — on the September 11 anniversary day — prompted outrage from the Republican Party of Virginia (RPV).

“As one who was privileged for 30 years to wear the cloth of the country and work among great Americans at the Pentagon, this callous, cheap fundraising stunt by Terry McAuliffe on a most sacred day marks him as unfit for office,” RPV chairman Rich Anderson wrote in a statement online.

McAuliffe’s Republican opponent in the gubernatorial race, Glenn Youngkin, did not send out any fundraising emails on Saturday.