Gold Star mother Jill Stephenson slammed the Biden Administration for referring to the Taliban as “businesslike” and “professional.”

Jill Stephenson lost her son, Army Ranger Ben Kopp, in 2009 after he was wounded in combat fighting the Taliban. Kopp was brought to Walter Reid Military Medical Center where he died due to his injuries over a week after the firefight.

When asked about the Biden Administration’s characterization that the Taliban were both “professional” and “businesslike,” Stephenson ripped the president in an interview with the New York Post, calling the portrayal “blasphemous.”

“Wow, the first word that comes to mind… was blasphemous,” she began. “To call the Taliban that — it’s absolutely disgusting, and it’s coming from the White House.” 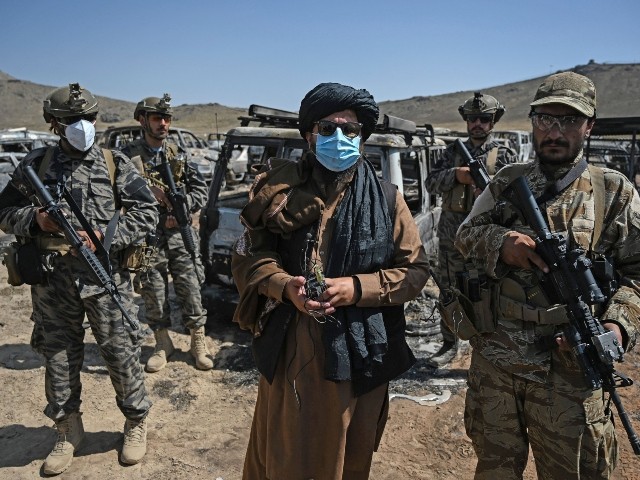 Members of the Taliban Badri 313 military unit stand beside damaged and discarded vehicles parked near the destroyed Central Intelligence Agency base in Deh Sabz district northeast of Kabul on September 6, 2021 after the US pulled all its troops out of the country. (Aamir Qureshi/AFP via Getty Images)

Stephenson went on to question, “why are we even negotiating with terrorists? This makes me shake my head.” She labeled the characterization as embarrassing to all Gold Star families and to all who served in Afghanistan:

As a Gold Star mother and as a voice that represents so many families who have paid the ultimate price for our freedom, and especially those of us whose loved ones took their last breath in Afghanistan, it’s embarrassing. It’s completely embarrassing. It’s disappointing. It’s disgusting. It’s unbelievable.  It’s like living in the ‘Twilight Zone.’

The official statement came from the White House National Security Council Spokesperson Emily Horne on September 9. “The Taliban have been cooperative in facilitating the departure of American citizens and lawful permanent residents on charter flights from HKIA,” the statement reads. “They have shown flexibility, and they have been businesslike and professional in our dealings with them in this effort. This is a positive first step.”

In a White House Press Briefing, Fox News White House Correspondent Steve Doocy challenged the administration’s portrayal of the Taliban. “The Taliban is businesslike and professional?” Doocy questioned Jen Psaki. “The interior minister has an FBI wanted poster. He’s got a $10 million bounty on his head. What’s the business?”

We are here to celebrate the return of American citizens who wanted to leave Afghanistan, of legal permanent residents, of Afghans who fought by our side to Qatar … and in order to get those people out, we had to work with some members of the Taliban, to press them and to work in a business-like manner, to get them out, that is what we were stating in the statement.